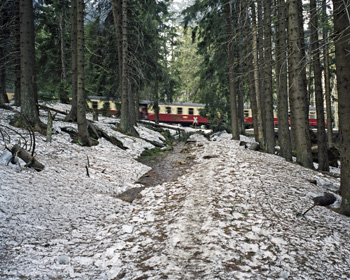 Image by Robert Schlotter reveals a cutting-edge side to Saxony-Anhalt that defies its quintessential German character.

Saxony-Anhalt, once a part of East Germany, emerged from German reunification in 1990 with a rich history but a weak economy. Two decades later, the GDP of this landlocked federal state has more than doubled and unemployment — once the highest in Germany — has been slashed.

Today, Saxony-Anhalt has a diverse economic base that ranges from chemical production to wind farms to food, including Germany’s oldest chocolate factory. Its economic innovation complements an illustrious history that incubated the stirrings of modern Protestantism — it’s where Martin Luther hammered his ringing edicts on a church door in Wittenberg — and gave rise to the Bauhaus school of architecture and musical geniuses such as George Frideric Handel. It’s also home to a cornucopia of World Heritage Sites, from fairytale castles to Luther memorials, which together form a quintessential German landscape.

Yet Saxony-Anhalt is also home to a burgeoning contemporary art scene, a cutting-edge slice of which can be seen in “Linger On! (Verweile doch)” at the Goethe-Institut. The photography exhibit is an extension of the Saxony-Anhalt Arts Foundation’s efforts to promote homegrown artists.

Capturing fleeting moments in time, the images range from documentary photography that enhances reality through the deft use of framing and lighting, to meticulously staged productions.

The six photographers in the show eschew traditional or predictable depictions of a region that has witnessed power struggles among empires and nations for centuries. Nor do they paint a cohesive picture of modern-day Saxony-Anhalt.

Yet the photographers — while not sharing discernible trends, styles or themes — are blessed with an abundance of originality. It’s hard to see a connection among them, except their talent and a penchant for either subtlety or an outright desire to be as different as possible. The eclectic subject matter ranges from two women with bright orange, afro-like hair whose milky white bodies are draped only in pearls, to a Soviet-era train racing through a desolate forest, as if speeding through a time warp. 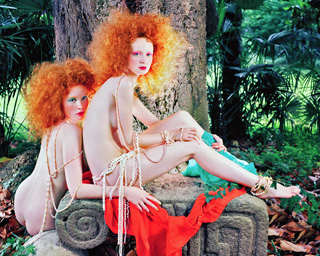 That train shot belongs to Robert Schlotter, who uses the prosaic to hint at a history that’s anything but. His photographs seem almost dull in their focus — trees, roads, sky, the geography of the Harz Mountains, and villages with ancient names like Sorgen (sorrow) and Elend (misery). His images are part of a project to document the borders of the Cold War — areas of tension, grief, drama and conflict that lurk beneath today’s mild-mannered landscapes.

Two of the women in the exhibition seem particularly intrepid: Iris Brosch, who stages women in artsy, decadent and energetic nudity, and Carina Linge, whose unforgettable piece depicts a woman petting a skinned rabbit, which after the first shock, seems peacefully decadent. Both photographers, however, echo almost classic styles, a kind of ancient Greek aesthetic set in motion, especially in the active women that Brosch portrays.

Matthias Ritzmann appears to be the most accessible of the photographers in terms of capturing expected German subjects and sensibilities. Germans, he happily notes, are inveterate joiners — they’re fraternal to a fault. If there is an activity, be it rowing, soccer, yodeling, mountain climbing or ornithology, then there is a German club for said activity. And Ritzmann has chosen to chronicle almost all of them. What’s best about his photographs is that they are neither condescending nor critical. They do not try to interpret the people or their interests. They are just full of human energy, the warmth of companionship and the celebration of doing something — anything.

Together, the images form a kaleidoscope of everyday life in Saxony-Anhalt — and its population of 2 million — but as seen through the extraordinary lens of contemporary photographers who are proving that the region has undergone not only an economic revitalization, but an artistic one as well.