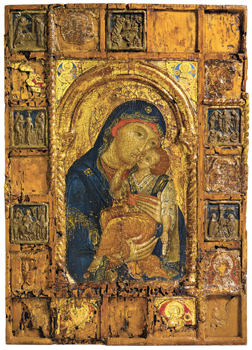 Among the 170 pieces of Byzantine art on display in “Heaven and Earth” are a 14th-century icon of the Virgin Mary and Jesus Christ.

Evidence of the Byzantine Empire has long existed in pockets in Washington, D.C. In Saint Sophia Greek Orthodox Cathedral, icons venerate the altar. At Dumbarton Oaks, the Byzantine collection includes Greek, Roman and western medieval art. But for the first time at the National Gallery of Art, a vast, almost impassively expansive exhibit showcases 170 pieces of Byzantine art from 13 museums located throughout mainland Greece and the islands, spanning the fourth to the 15th centuries.

Ambassador to Greece Christos Panagopoulos said “Heaven and Earth” is “the first exhibition on Byzantine art of such magnitude to ever be shown in Washington, D.C. It is an excellent opportunity for Greece to showcase the invaluable treasures, many of them for the first time, that are a significant and integral part of our cultural and historical heritage.”

He added: “This continuous evolution of the Greek philosophical and theological thought from the ancient to Byzantine era traces the impact of its cultural foundation and visual language to the world.”

In fact, the Byzantine Empire — the Greek-speaking continuation of the Roman Empire — was the longest-lived political entity of Europe. In 330, Emperor Constantine the Great moved the capital of the Roman Empire from Italy roughly 1,000 miles to the east, near the site of the ancient Greek city of Byzantium on the Bosphorus Strait linking the Aegean and Black Seas. The empire survived the collapse of the Roman Empire to the west in the fifth century and lasted for more than a millennium before falling to the Ottoman Turks in 1453. All throughout, the empire’s borders were constantly expanding or retracting, but the admiration for Byzantine artwork, architecture and literature remained constant and endures to this day. 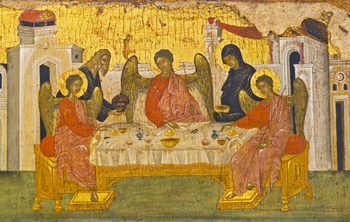 a 14th-century icon showing the hospitality of Abraha

The display itself was a herculean work in progress. Three years in the making, the opening of the exhibition in October was delayed by the U.S. government shutdown. Consequently, the exhibit of the world’s most prestigious and comprehensive collection of Byzantine art opened without the fanfare it so richly deserved, requiring the art, instead, to speak for itself. 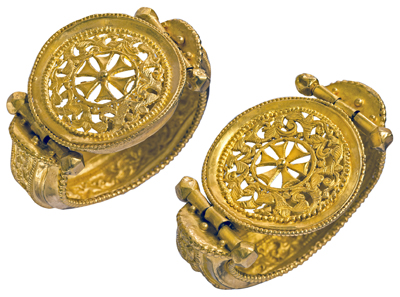 a pair of 6th-century gold bracelets

And speak it does. The title “Heaven and Earth” refers to the focus on both secular and religious artwork in the collection, curated into five sections. “From the Ancient to the Byzantine World” highlights the era of coexistence between paganism and Christianity during the fourth to sixth centuries. “The Christian Era: Spiritual Life” showcases pieces created for worship in churches or private worship from the sixth to the 14th centuries. “The Pleasures of Life” features secular items for daily living, such as floor mosaics and silver dinnerware. The manuscripts of Homer, Euripides, Socrates, and Euclid are prominent in a section devoted to “Intellectual Life.” “The Last Phase: Crosscurrents” rounds out the exhibition with items devoted to the final days of Byzantium and art created under the emperors of the Palaiologan dynasty (1261-1453), the longest-lived of all Byzantine dynasties.

Eleni Zachariou, a scholar of ancient Greek history and archaeology and co-founder of Vacances Travel, said that this critical era of history is not always given the attention it deserves.

“What is Byzantium? Many people have no idea,” she said. “Over nine centuries, this region amassed two-thirds of the riches of the ancient world — the intellect, the art, the wealth. All were found in Byzantium.”

And for a short time, it can all be found at the National Gallery.

Heaven and Earth: Art of Byzantium from Greek Collections

through March 2
National Gallery of Art
on the National Mall between 3rd and 9th Streets at Constitution Avenue, NW
For more information, please call (202) 737-4215 or visit www.nga.gov.