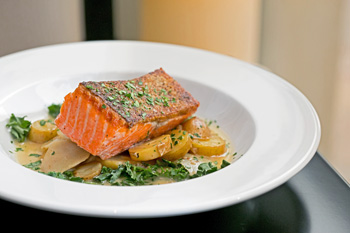 Over the past few decades, Washington has seen the comings and goings of chefs with impressive culinary pedigrees as it has developed into a serious restaurant town. Older chefs who have been cooking their entire professional careers stand shoulder to shoulder in the local pantheon of culinary luminaries with celebrity chefs and hot-shot newbies whose lives revolve around food.

Recently, a new type of chef is joining their ranks. The area is welcoming chefs who began their professional careers in entirely different fields but could not ultimately resist the pull of the kitchen. These are not hobbyist restaurateurs. They are savvy individuals who study the industry before diving in to make sure they understand what is required for success. Some have gone on to receive formal training, others have joined the teams of established ventures, while others have jumped right in by opening their own spot, though they frequently partner with seasoned professionals.

Chef-owner Tim Ma is one of the new breed, and his new Arlington, Va., restaurant, Water & Wall, is a striking example of things done right. Chef Ma began professional life as an engineer but the culinary calling was too powerful, so he left that first promising career to attend the French Culinary Institute in New York City. After a stint at a restaurant in St. Thomas, he returned home to open his own place. His first solo venture, Maple Ave Restaurant in Vienna, Va., has drawn critical acclaim and proved that Ma’s decision to switch careers was a good one, especially for diners. With just a few years of experience, Ma recently opened Water & Wall as Maple’s more sophisticated little sibling. Also described as modern American cuisine, Water & Wall demonstrates the ability of Ma and his eclectic team of chefs to blend the techniques and ingredients of various culinary traditions into a creative, appealing menu.

That menu, in fact, is fairly brief and depends heavily on what the team can source locally, so it changes frequently. Broken into either starters or main plates, diners can sample from a nice range of meats and fish, though the purely vegetarian options are limited. Somewhat refreshingly, unlike many chefs, Ma takes fresh, local and seasonal ingredients as a given and does not play them up in promoting his restaurants. It simply is the only way he does things in his kitchens.

The chicken wings at Water &Wall may well be the best in the Washington area and even rival those prepared by the Anchor Bar in Buffalo, New York, the reputed originator of the archetypal Buffalo chicken wing. Ma and his team come to their version quite differently but end up with something every bit as enticing and addictive. While deep-fat frying is an essential first step in both versions, Water & Wall uses Korean red chili paste and crème fraîche to achieve a perfect balance of richness and spice. They alone make the trial of finding a parking place in Arlington worth it. Buffalo wings are actually a favorite snack of sous chef Keelan Thompson, which might explain why these are so good. 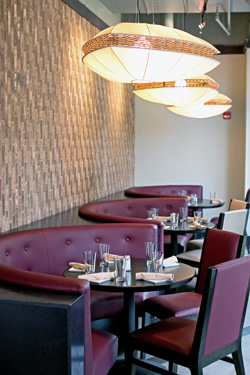 Similarly, the team has put together their version of the coastal Southern classic shrimp and grits as a starter, but they reinterpret it by adding a mild venison sausage, piquillo and tiny okra slices.

On the Asian side of things, steamed mussels are prepared with saffron, coconut, Chinese sausage, cilantro and Thai basil. The Burmese chicken salad, with turmeric onions and chili vinaigrette, is a slightly spicy and traditional dish that’s a nod to chef Nyi Nyi Myint’s native cuisine. The chicken liver pâté, on the other hand, with crostini, duck prosciutto and orange vincotto glaze, is decidedly continental in its appeal.

One of the notable characteristics of Water & Wall’s dishes is their relative simplicity, both in design and presentation. They depend on just a few well-paired flavors and attractive, no-fuss presentation for their effect on the eye and palate. On a recent visit, drum fish was pan seared and served with a warm salad of julienne leeks and pickled cabbage, as well as golden beet chunks and a buttery kabocha squash puree. The pan-seared steelhead fish was paired with sunchoke slices, bits of kale, potato and lemon fish broth. Both dishes were striking with their contrasting colors and textures, and we could not help but think of the old adage that one way to eat healthy is to get a lot of color on your plate. Water & Wall dishes not only look and taste good, they are good for you. 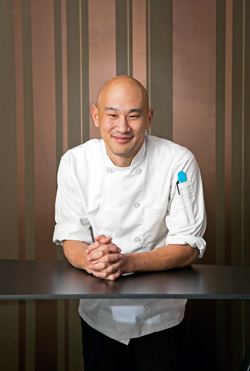 The sides that accompany each dish are also a mark of distinction for Water & Wall. Each is an integral part of the dish as a whole but could easily stand alone. (At this time the menu does not offer sides to be ordered separately, but the kitchen will usually accommodate requests for sides by themselves.) The various purees are particularly well done, but the caramelized Brussels sprouts — quartered, deep-fat fried and tossed in truffle aioli with black radish strips — redefine the lowly little cabbage.

Dessert choices are limited and change frequently, but what’s there stands out. Small pastel mochi balls (pounded sticky rice cake), each filled with different flavors of ice creams such as apple pie, almond and raspberry, are a light and fun choice. The panna cotta — pumpkin on a recent visit — is dense and not too sweet. Partnered with a triangular walnut-chocolate-butterscotch bar, the dish is substantial. Only chocolate diehards will be disappointed with the dessert choices.

Simplicity in design carries through to the space itself. Ma brought on Sucha Khamsuwan of Studio Ideya to create a vision for the space that interprets the restaurant’s name, Water & Wall, which refers to an intersection in lower Manhattan where Ma first met his partner in life as well as business, Joey Hernandez (who is the current general manager for Maple Ave). But Khamsuwan took the literal meaning of the words and used strong vertical elements and shimmery wire-mesh curtain walls that effectively create a sense of flowing water. There is minimal ornamentation to interrupt the flow, and the light sand-colored wood floors further evoke the essence of a streambed. Dramatic lighting fixtures soften the exposed ductwork and cast a muted glow over the earth-toned spaces to create a restful atmosphere.

The elegance of Khamsuwan’s design might easily have overshadowed the comfort of Ma’s laidback concept. But the capable front-of-the-house ministrations of general manager Nick Seo bring out the casual instead. A Washington native, Seo got the restaurant bug early on and left Temple University for the Culinary Institute of America. After graduating, he took on a range of roles at several places in the area before ending up on Ma’s team.

Those career intersections — some of which, like Ma’s, took unlikely detours — have all thankfully led to one place: Water & Wall, where the professional prospects of Ma and his entire crew are overflowing with potential.