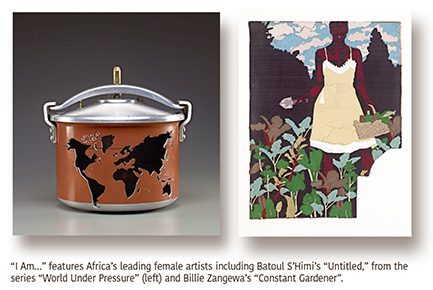 An exhibition at the National Museum African Art takes its inspiration from the famous 1970s feminist song “I Am Woman,” but updates it to sing the praises of a more modern type of feminist.

“I Am… Contemporary Women Artists in Africa” features 28 of Africa’s leading female artists who explore the contributions women have made not only to art, but also to a broad array of areas such as the environment, politics, race, sexuality, social activism, faith and more.

“There are so many forms of feminism, from earlier Western constructs of feminism to Womanism, Stiwanism, Africana Womanism and Nego-Feminism, among others,” said Karen Milbourne, senior curator at the National Museum of African Art. “This project does not align with any particular ideology but seeks to reinforce a more contemporary awareness of how women contribute to the full spectrum of the human experience.”

The exhibit crosses generational and media divides while at the same time looks at the museum’s own institutional history as a lens to understand why women are still underrepresented in the arts. 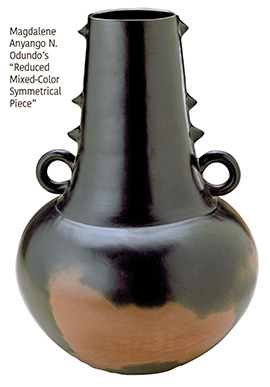 The works of art included in the exhibit have been acquired over the course of more than four decades. But an assessment conducted five years ago revealed that only 11% of the named artists in the collection were women. Since then, the percentage of women represented in the museum’s collection has risen to 22%.

“This museum is dedicated to the fullness of Africa’s history, from ancient to contemporary times, and doing justice to this rich history is not possible without attention to the women who have shaped it,” Gus Casely-Hayford, director of the museum, said in a statement. 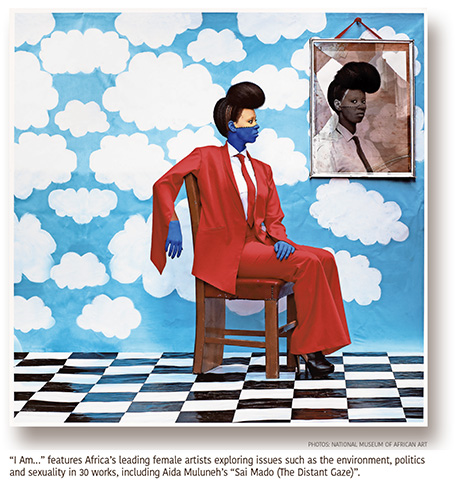 The artists in the exhibit include Ladi Kwali, who in 1925 was born in a Nigerian village where pottery was an indigenous female tradition. Her artistic skill eventually earned her worldwide attention and several of her works were acquired by the Emir of Abuja. There’s also Zanele Muholi, 47, a South African visual activist and photographer who shines a light on her country’s LGBTQI community.

Milbourne cited other notable artists in the show. “Billie Zangewa’s ‘Constant Gardener’ really speaks to the poise, insight and technical skills of the powerhouse women in this exhibition.” The title of Zangewa’s piece refers to a time after the artist’s son was born when she would sometimes wake up at night to plant the fresh produce that would later nourish her child. “For Zangewa, sewing is a matter of identity and she prefers to work with the luminous, reflective properties of dupioni silk,” according to the museum.

Milbourne also mentioned “Batoul S’Himi, who, with such cheeky clarity, has cut a map of the world into the most domestic of objects — one’s cooking pot, in this case a pressure cooker — to represent women from their home to international arenas and speak about the rising pressure to give women their due.”

In addition to cooking pots and silk, the materials and media found in the exhibition are diverse, with paintings, sculpture, ceramics, high fashion, fiber arts, video projection and installation pieces all represented among the 30 pieces.

But the exhibit’s themes of female skills and range are universal, accompanied by what Milbourne calls “truly stunning works of art.”

“It is an opportunity to think about how each of us pursues our passions, from global concerns of environmental justice, racial equality and historical reckoning, to personal moments of parenthood and celebration,” Milbourne said. “The themes are universal, but the artistry which they are explored is unparalleled.”

The exhibit is part of the Women’s Initiative Fund, which began in 2012. The purpose of the fund is to increase the profile of Africa’s women in the arts through exhibits, publications, acquisitions and strategic partnerships around the world.

I Am… Contemporary Women Artists of Africa