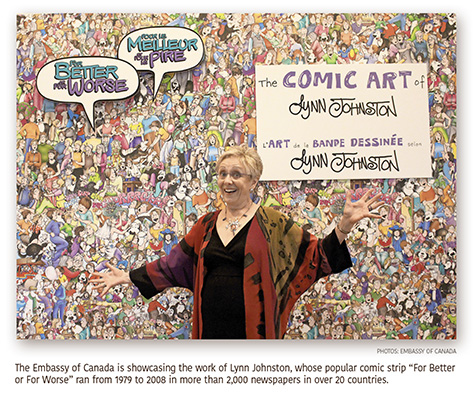 Canada’s most acclaimed cartoonist, Lynn Johnston, is internationally known for her comic strip “For Better or For Worse.” The stories revolving around the lives of Elly Patterson and her family had at its peak over 220 million readers of more than 2,000 newspapers in more than 20 countries. Now, the Embassy of Canada explores Johnston’s remarkable career and the themes of her most popular strip in “The Comic Art of Lynn Johnston.”

While many comic strips are known for lighthearted humor, supernatural heroes or sharp political satire, “For Better or For Worse,” which originally ran from 1979 to 2008, is widely praised for its realism. That’s not too surprising given that the initial characters were largely based on Johnston’s own family and the storylines were drawn from her own personal experiences.

“For Better or For Worse” follows the Patterson family (whose main characters are named after the middle names of Johnston’s husband and two children) and their friends, all of whom age in real time and whose lives mirror the ups and downs we all go through, making the comic strip universal and relatable.

As such, the strip doesn’t shy away from the hard realities of life, tackling subject matter such as child abuse, sexual harassment, infidelity and death. In particular, the death of the Pattersons’ beloved family dog Farley, who dies after saving Elly’s daughter April from drowning, struck an emotional chord for many readers, according to Johnston. The artist, who grew up with an abusive mother, has said that drawing was a cathartic outlet for her own personal struggles. She dealt with her own infertility, for instance, by creating April, Elly’s third child.

But along with the bad times come the good times, from childbirth to weddings. Interspersed throughout are the mundane daily routines that Johnston infuses with humor, such as the frustration of getting a child to sit still for a haircut or the challenges of keeping the spark alive in a marriage “despite diapers, drool and distractions,” as Johnston’s website puts it.

The progression of the comic strip also reflects the broader societal changes that took place during its three-decade run. In one famously controversial 1993 strip — inspired by Johnston’s brother-in-law — the character Lawrence comes out, becoming the first gay character in a syndicated comic strip.

Throughout this journey, readers get to watch their favorite characters grow and build lives of their own. Son Michael is introduced as a rambunctious preschooler who morphs into a sullen teenager and eventually develops into a mature young man who marries his childhood crush Deanna and has two children. Daughter Elizabeth goes from bratty to awkward to confident as she becomes a teacher, marries an old friend, becomes a stepmom to his daughter and gives birth to a son named in honor of her dying grandfather. Meanwhile, April was a tomboy and talented musician who was on her way to study veterinary medicine when the comic strip ended in 2008.

Johnston started the strip when she moved to Lynn Lake in the Canadian province of Manitoba with her husband and two children. Contacted by Universal Press Syndicate to produce a daily strip, she had no experience in comic art. “I had never planned on doing a comic strip at all, but here they were, suddenly offering me a 20-year contract,” Johnston told The Diplomat. “I needed some time to develop the characters and learn how to draw sequential gags, so that there was a certain flow to it.” 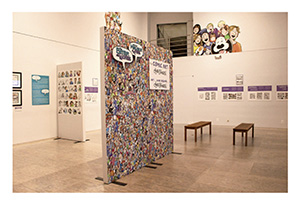 Childbirth and family life are two omnipresent elements in Johnston’s work. Her first three books — “David, We’re Pregnant,” “Hi Mom, Hi Dad” and “Do They Ever Grow Up?” — were humorous reflections on parenthood that are now hard to find because they are all out of print.

“Of course these topics are close to my heart,” Johnston said. “You have to be a robot to not feel that way. We all have families and I got a lot of support because people really said, ‘That’s what happens in my family too.’ It’s not a romanticized portrait of family life. I think it got a lot of attention because people could in a way relate to it.”

Despite the realistic undertones of the situations and the incorporation of many of her real-life friends and family, Johnston said the majority of her work is fiction. “You can’t impose on the personal or private life of your relatives. Michael Patterson, who was based on my son when he was a baby, for example, couldn’t stay that way. After a couple of years, I gave my son the anonymity that he wanted.”

The exhibition at the Canadian Embassy offers a look at both Johnston’s creative process and the development of her popular comic strip. A lifelike copy of the artist’s drawing table gives visitors a chance to see her work environment, while a display of objects and items featured throughout the comic book series provides insights into her inspiration for storylines. Photos of family and friends add a personal element to the display. There is an even opportunity for artistically adventurous visitors to try their luck and create a comic of their own.

Another section explores the evolution of “For Better or For Worse,” sparking interest among new readers and nostalgia among those who followed it from the start. Curator Kate Grumbacher belongs to the second category.

“I grew up reading ‘For Better or For Worse,’ and so I really wanted an exhibition here,” she told us. “We talked to Lynn Johnston and we wanted to show a little bit about Lynn and the process of her creating the cartoons. And then we did a lot of focus on the art but also how she draws. Finally, we also focused on some of the issues she encountered — primarily the evolution of her characters, because unlike many other artists, her characters age over time and deal with a lot of realistic scenarios: death, illness, weddings, school, etc.” 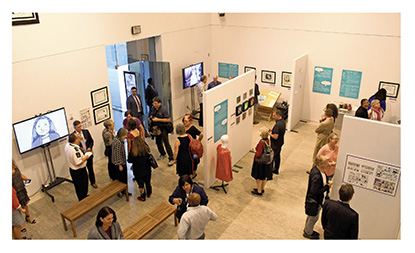 In fact, just like Johnston’s real-life family inspired the comic strip, it was another real-life family event — ironically related to the wedding vow for which the strip is named — that led to its conclusion. In a TV screen at the end of the exhibition, Johnston explains why, in 2008, she decided the time had come to put an end to the long-running story of the Pattersons.

“Initially I wanted to work until I had done 30 years, but my husband and I broke up, which was just devastating. I was writing about a family that was working and communicating, while I had a lawyer sitting across from my husband and I,” she said of the demise of her 30-year marriage. “But I think I wanted to quit before that. When I got my last seven-year contract, I had already made my mind up that these were going to be the last seven years I would work on the comic.”

But the Pattersons are still alive and well. Right after the comic strip ended, Johnston began a series of reruns that restarted the strip’s early storylines and the dialogue from the 1980s strips to better reflect modern societal standards.

These reruns are still being produced, with one of the more distinct changes being that the daily cartoons are now digitally colorized.

The exhibition also offers a glimpse of Johnston’s work nowadays. Behind a large panel full of Patterson characters, we see a mannequin draped in a colorful dress and a delicately placed vermillion coat. A closer look reveals that there are dozens of cartoon cats, in all sizes and colors, on the dress.

“I am currently doing something called surface design. I had been looking for funny cartoons to put on fabric and I couldn’t find any. So I started to make designs on my own,” Johnston said. “Together with my colorist, my daughter, and another young cartoonist I just hired, we are working on fashion design right now, and I hope to see some of my patterns on fabric and in retail stores to sell in the future.”

If the project takes off, it would be yet another way for Johnston to bring her personally inspired creations directly into our everyday lives.

The Comic Art of Lynn Johnston