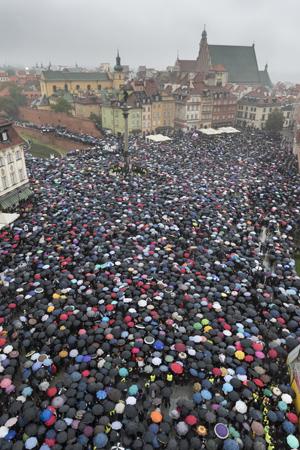 In October, tens of thousands of Polish women donned black outfits and took to the streets of Warsaw and other cities to protest a draft law initially supported by the right-wing government that would have banned virtually all abortions in the country.

Their passionate public display of solidarity worked. The parliament, along with the ruling Law and Justice Party (PiS), backed away from the controversial proposal, which would’ve made all abortions illegal unless the mother’s life was at risk.

The bill was submitted to the Sejm (parliament) by a conservative Roman Catholic civic group, Stop Abortion, in an effort to make Poland’s already tough anti-abortion laws even more stringent. If the bill had become law, it would’ve been illegal to terminate a pregnancy caused by rape or incest. Not only that, but the law called for doctors who facilitate an illegal abortion and women who seek one to be jailed for up to five years. Even the Catholic Church, a powerful voice in the religiously conservative nation, said it could not support locking women up for having an abortion.

The about-face by the ruling party was “a humiliating climbdown,” according to the Guardian’s Christian Davies. “PiS members who had referred the legislation to the committee less than two weeks ago threw it out,” he wrote.

PiS swept into power in 2015 on a wave of nationalist sentiment that mirrored the populist debates raging across the continent (and here in the U.S.).

Polish women don black during an Oct. 3 demonstration in Warsaw, boycotting jobs and classes as part of a nationwide strike to protest a legislative proposal that would have virtually banned all abortions in Poland.

After ridding itself of Soviet communism in the 1990s, Poland had been a poster-child of success for the European Union since joining the bloc in 2004. The country enjoyed sound fiscal management and impressive economic growth despite an EU-wide slowdown. Poles championed EU enlargement and, in turn, the bloc lavished them with infrastructure funds and other assistance.

This progress, however, wasn’t enough to sway many older, rural voters who feared a liberal erosion of traditional Polish values and complained of being left behind by globalization. A fervent backlash against migrants and refugees, diktats from Brussels and culture wars over issues such as gay rights helped propel PiS to an ironclad majority in parliament.

But in trying to push through its conservative agenda, PiS has come under fire for gutting constitutional checks and balances, trying to muzzle the media, needlessly expanding surveillance powers and pulling away from EU democratic norms.

EU officials were closely watching to see how far Poland’s abortion law would go. Even PiS officials were forced to admit they may have gone too far. Jarosław Gowin, the minister of science and higher education, said that the protests “caused us to think and taught us humility,” the AP reported.

Despite the victory for women’s rights advocates, the current abortion law is not much better. For the past 23 years, women in Poland have only been able to terminate a pregnancy — legally — if a serious birth defect was detected in the baby, if they had been raped, if the baby was conceived in an incestuous relationship or if the mother’s life was in danger by giving birth. And even then they could still only terminate within the first 12 weeks of pregnancy.

“This proposed law was an affront to all women, but it especially hurt poor women,” Polish academic Justyna Wlodarczyk told The Washington Diplomat. “If you work and are reasonably well off, it’s fairly easy to get good health care, contraception, even abortion services like the morning-after pill in Poland. Or, for about 500 euros, you can get a bus trip to Slovakia or somewhere else, have an abortion in a clinic and come home. But poor women can’t afford abortion tourism. They also don’t have good health care, including prenatal examinations during pregnancy. So they might not find out that there’s a problem with their baby until it’s too late. It’s not easy in Poland to raise a disabled or very sick child. The benefits are very low and there’s no care infrastructure or support to fall back on.”

At the same time that the anti-abortion law was brought before lawmakers, a different law, proposed by another civic group, was submitted. That law sought to liberalize abortion in Poland, but it was quickly shelved by PiS, while the draconian law, proposed by Stop Abortion, sailed through to the next phase.

“All of this happened within days, and just as quickly, when women got wind of what was going on in the Sejm, a movement arose and, driven by social media, grew to huge proportions,” said Wlodarczyk, who is currently in the United States on a Fulbright scholarship.

A news report on EUobserver.com said the spark that lit the flame under the mass protests was a social media post by actress Krystyna Janda — one of late Polish film director Andrzej Wajda’s muses. Janda recalled the demonstrations staged by women in Iceland in 1975 to protest wage discrimination. Nine in 10 Icelandic women boycotted work, refused to cook and left their children with husbands, uncles or brothers for a day. The impact of their protest was huge.

“Iceland’s men were barely coping,” Annadis Rúdólfsdóttir wrote in the Guardian, 30 years after the strike. “It was a moment of truth for many fathers who were exhausted at the end of the day.”

Poland took a page from Iceland’s handbook. The symbol of the “czarny” (black) protest was a uterus with one of its fallopian tubes pointing upward, giving the finger. The women held clever, eye-catching placards that read “PiS Off” and “No Women, No Kraj” — pronounced “cry” but literally translated to “no women, no country” — as they thronged the streets of Warsaw on a rainy Monday. They threatened to withdraw all their savings from banks. They said they would block the streets of major cities. Within hours, the bill was dead in the Sejm. The women won, but whether their triumph will usher in long-term gains in the deeply religious nation remains to be seen.

Polls have shown that three-quarters of Poles back the current, strict abortion laws, which have been around since 1993. In fact, the current rules closely resemble what U.S. President-elect Donald Trump said about abortion while he was on the campaign trail. “I am pro-life. I support that position with exceptions allowed for rape, incest or the life of the mother being at risk,” he said in an op-ed for the Washington Examiner in January 2016. 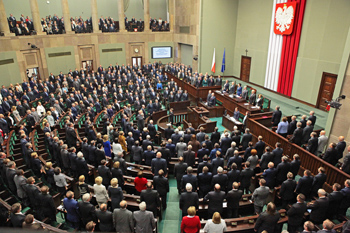 Poland’s parliament, the Sejm (seen above in a 2014 national assembly) abruptly backtracked on a recent bill that would’ve banned virtually all abortions in the country after a public outcry. Poland is already home to some of toughest abortion laws in Europe.

Trump has since vowed to nominate anti-abortion justices to the Supreme Court to possibly overturn “Roe v. Wade”; sign into law a bill ending “painful late-term abortions”; defund Planned Parenthood “as long as they continue to perform abortions”; support some form of punishment on women if abortion is outlawed (before quickly backtracking on that statement); and make the Hyde Amendment, which bars the use of certain federal funds to pay for abortion, permanent law.

Dr. Willie Parker said he was troubled by Trump’s rhetoric. Parker wrote on the website of Physicians for Reproductive Health, where he is board chair, that, “A Trump presidency will mean that attacks on access to abortion and all other reproductive health services will continue at the federal level and in states all across this country.”

In a Nov. 9 blog post, Polish actress Janda was more dramatic: “The winner is Donald Trump, a man who despises women. Lord, give us strength.”

At the same time, Trump has praised Planned Parenthood for helping millions of women, and he’s been attacked by pro-life groups for not condemning abortion forcefully enough.

Down But Not Out

Meanwhile, Poland’s harsh abortion law may have been shelved, but the debate is far from settled. PiS party leader Jarosław Kaczyński said the initial abortion law was badly formulated and the party needed time to craft separate, new legislation.

The party’s so-called pro-life law would aim to ensure that “even in pregnancies which are very difficult, when a child is sure to die or be born with severe deformities, women will still give birth so that the child can be baptized, buried and have a name,” Kaczynski explained in an interview in October.

The plan also authorizes a one-time payment of around 1,000 euros to parents of children who are born with a disability or life-threatening illness. The payment is supposed to help further cut the number of abortions in Poland, which, according to the official count, is very low already — fewer than 2,000 in 2014, according to a government tally.

“They’ve missed the point. It’s not about money, and a one-time payment of 1,000 euros won’t go very far at all, anyway. Anyone who’s had a baby knows that that’s a few months’ worth of diapers. And who’s going to define what’s a qualifying disability and what’s not?” Wlodarczyk said.

There were no protests over the new law, and much like the Icelandic women who are still not reaping the wage benefits of their massive work stoppage more than 40 years ago, Polish women are not expecting their abortion laws to be liberalized or changed any time soon.

“Change won’t happen until we get a new government, and that won’t be for at least another three years,” Wlodarczyk said. “And remember, the czarny protest was against an anti-abortion law. I would be surprised to see as much support for liberalizing Poland’s abortion laws. A large proportion of the population supports some restrictions on abortion — just not throwing people in jail.”