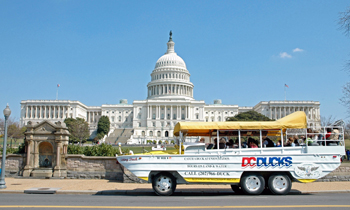 As the seat of the U.S. government and heart of American democracy, Washington, D.C., is a city that relies heavily on the tourism industry — so much so that visitors regularly generate more than half of the city’s annual sales taxes.

So it should come as something of a relief to city officials, especially after a year in which they were forced to close a $322 million budget gap, that the $5 billion tourism industry grew strongly in 2010 and is expected to close out 2011 on a high note. Regardless, a weaker forecast for conventions means the city will have to continue drawing in leisure travelers, with more and more of them coming from abroad, while picking up the convention pace in the coming years.

“In 2012 we won’t realize as many citywide [conventions] as we did in 2011, however we’re optimistic as we’re going to focus our efforts and initiatives on going after the domestic market and the international visitors market,” said Elliott Ferguson, president and CEO of Destination DC, the city’s tourism marketing agency.

In 2010, according to the agency, 15.54 million domestic visitors flocked to the nation’s capital, a 5.1 percent increase over the prior year. They spent $5.68 billion, up 8.2 percent from 2009, with lodging and food accounting for a large portion of that total. Things seem to be looking up for 2011, too. Comparing July 2010 to the same month a year later, occupancy is roughly holding steady, while average daily rates ticked up 1.5 percent, according to Smith Travel Research.

A DC Ducks tour mobile passes by the U.S. Capitol.

Ferguson attributes that drop to a number of factors, including the arms race-like nature of the convention business, in which cities across the United States are constantly building new convention facilities and renovating old ones.

Additionally, he noted, the Washington Convention Center, which was completed in 2003, lacked the nearby hotel capacity that would attract convention planners, especially with existing competition in other cities.

To his relief, the 1,167-room Washington Marriott Marquis Hotel, which will be built across from the convention center, broke ground in November 2010 after years of trouble finding financing, a back-and-forth lawsuit between developers, and debates over how much the city would kick in. (The hotel is estimated to cost $550 million; the city will be paying $160 million toward that.)

“So you’ve got increased competition; we had a hotel that had not materialized, though it will be done by 2014, and those are all variables that really hurt us,” said Ferguson.

In the meantime, city officials are keeping their eyes on tourism, notably the market for international travelers, to keep bringing money into the city and providing much-needed jobs.

According to Destination DC, the number of international visitors to Washington grew from 1.4 million in 2009 to 1.74 million in 2010, an increase of 13 percent. A U.S. Department of Commerce report found that in 2010, Washington ranked seventh in the country in international visits, and its biggest feeder markets were the United Kingdom, Germany, Australia, China, France, India, Japan, the Benelux countries, Brazil and Italy.

According to Hector Torres, vice president of Capital Hotels, which runs the Beacon Hotel and the St. Gregory Luxury Hotel and Suites, the reason why so many international visitors, primarily from Europe, come to the United States is a matter of simple economics.

“We’ve become a bargain,” he said. “The devaluation of the dollar has become a blessing in disguise because Washington, or the United States as a whole, has become a far more affordable destination for the international traveler. The reason they’re encouraged to spend more here is, ‘Why not?’ It really is well worth it for them to travel here.” 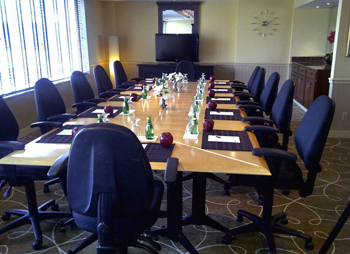 With 9,000 square feet of event and conference space, the Beacon Hotel on Rhode Island Avenue specializes in business meetings and social events.

To better attract the international market, Ferguson said, the city is working to promote its “uniqueness” while planning internationally themed events. From May to July, he noted, the event “La Dolce DC” highlighted Italian arts, architecture, culture, and cuisine in Washington (also see the Culture section of the April 2011 issue of The Washington Diplomat). Timed to honor the 150th anniversary of the unification of Italy, it also coincided with the signing of a sister-city agreement between Washington and Rome in June.

Looking toward 2012, Washington has planned a number of events and campaigns to keep tourists — both domestic and international — flowing into the city. Destination DC will be marketing the National Cherry Blossom Festival’s Centennial Celebration, which will start on March 20 and expand from 16 days to five weeks.

Additionally, the agency will promote Passport DC, the popular annual showcase of embassies throughout the city, and continue the second year of the “Civil War to Civil Rights” promotional campaign, which has tied the 150th anniversary of the war to the opening of the Martin Luther King Jr. Memorial on the National Mall. After being postponed due to Hurricane Irene, the new memorial will be formally dedicated on Oct. 16.

And despite the diminished expectations for 2012 conventions, Ferguson isn’t abandoning hope altogether. Just as he does with international visitors, he says marketing Washington’s unique global status to convention organizers and corporate travelers is key to regaining their business. Additionally, the city is marketing itself to smaller customers.

“The good thing about being in and representing Washington, D.C., is that we’ve got well over 5,000 associations in our backyard, so we look at ways in which we can entice those groups to keep their conventions here in Washington, which is in effect a cost savings for them because they don’t have to send 50 or more people to another destination,” he said.

Moreover, he touted an advantage only available in Washington: the capacity to interface with and lobby Congress and government agencies. In July 2012, for example, Washington will play host to the XIX International AIDS Conference, which is expected to bring 20,000 delegates from all over the world to Washington.

Grant Dipman, general manager of the Ritz-Carlton Georgetown hotel, expressed optimism for the coming year, primarily in terms of corporate events. The demand has been such that the hotel is transforming the current Fahrenheit restaurant into a banquet space, which will be able to accommodate meetings for up to 75 guests and receptions and dinners for up to 120. Stylistically, it will feature the design elements that make the Georgetown property stand out, including exposed steel beams and original red brick walls reminiscent of the hotel’s history as a turn-of-the-century brick factory structure that later served as the Georgetown incinerator.

The conversion is part of what Dipman called a “re-concepting” of the Ritz-Carlton’s offerings. “We’ve seen greater demand this year for corporate events and for catering events, and we’re already seeing greater demand for that next year. There’s such a great market in D.C. for corporate business and for those events that we’ve been looking to want to create additional space to be able to capture that business,” he said.

Torres, though, remains more somber about the immediate future for conventions and corporate travel, noting that not only are many companies holding back on spending, but a congressional calendar that has legislators back in their home districts more often means that fewer corporate travelers are coming to Washington to lobby — for now. After the 2012 election, however, there will be renewed attention on reaching whatever administration takes shape.

In the meantime, Destination DC aims to continue marketing Washington to tourists and convention-goers alike. In 2011, the agency spent $14 million on marketing efforts; the agency’s budget for 2012 is currently being finalized for the start of the fiscal year on Oct. 1. That spending will be particularly important to the city’s fortunes — according to the D.C. Office of Tax and Revenue, in 2010, every $1 spent on marketing yielded $36 in visitor spending.