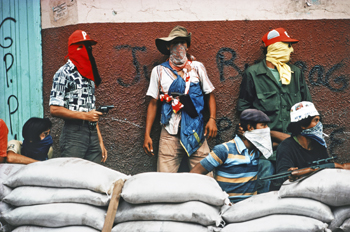 Among the 275 images in a major survey of war photography at the Corcoran Gallery of Art are: Susan Meiselas’s “Muchachos Await Counter Attack by the National Guard, Matagalpa, Nicaragua.”

As I’m writing this, I can hear John Wayne bellowing orders to his troops in the 1962 film “The Longest Day,” which depicts the D-Day invasion of Normandy that would turn the tide of World War II.

You won’t find John Wayne in “War/Photography: Images of Armed Conflict and Its Aftermath,” the vast, ambitious exhibition at the Corcoran Gallery of Art that seeks to generate a new and larger understanding of war in all its guises, whether it’s the clash of empires in the 19th-century Crimean War, or America’s modern-day war on terrorism — a high-tech campaign that in many ways resembles the old-fashioned guerilla wars of yesteryear.

The scope of the exhibit speaks to mankind’s timeless appetite to pick a fight — documented by 185 photographers representing more than 25 nationalities, covering 165 years’ worth of battles. It took organizers of the exhibition, the Museum of Fine Arts in Houston, 10 years to cull through a staggering 1 million photographs and collections in 17 countries.

Roaming through this jarring, expansive visual archive of conflict, what emerges — besides man’s unrelenting penchant for destruction — is a sense of déjà vu. The people and places are worlds apart, and yet the horrific toll of war can look remarkably the same, whether in Chechnya, Mali, Colombia, Korea, Syria or Serbia.

Perhaps that’s why curators eschewed organizing the exhibition according to chronology, a prosaic way to frame the universal brutality of war. Instead, they’ve broken it down by no less than 30 themes that echo war’s ability to cut across boundaries, time and moral restraint. 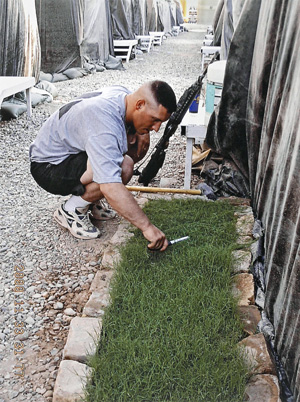 The first category seems almost tame: media coverage and dissemination, which showcases the technical advances in how photographs (and information) were produced, shot and disseminated. But this somewhat mundane intro paves the way for the revolutionary work of photographers (some of whom died in the process) who captured indelible images of conflicts before they were relegated to the annals of history.

Room after room, a visceral journey unfolds, lumped around categories such as “Patrol and Troop Movement,” “Daily Life,” “The Wait,” “The Fight,” “Aftermath: Exhaustion and Shell Shock,” “Refugees,” “Children,” “Dead and Wounded,” and “Aftermath: Grief and Burials.”

The dispassionate groupings and matter-of-fact text belie the onslaught of images that besiege the viewer: aerial shots from a Japanese bomber cruising into Pearl Harbor, Nicaraguan street fighters armed with Molotov cocktails waiting to pounce on National Guard troops, ragged and dazed prisoners of war, and the still-unnerving shots of the second airliner approaching the burning World Trade Center towers.

It’s an exhausting journey full of the noise of battle: gunfire, explosions, screams and the voices of men (and women) in distress. It is, like war itself, almost too overwhelming to take in — requiring a certain numbness to absorb.

Even reading the titles of the various categories is somehow numbing — a mix of knowing dread and morbid curiosity. Most of us already know the basic history behind these scenes, and some are iconic images that we’ve been exposed to many times before. But that in no way diminishes their magnetic hold.

Robert Capa is here with his controversial shot of a dying combatant, flung backward after being shot during the Spanish Civil War. Eddie Adams’s image capturing the precise moment when a Vietcong prisoner is executed is one of the world’s most famous war photographs. There are grainy photos of soldiers slugging through the beaches of Normandy and Marines raising the flag over Iwo Jima.

The exhibit features a number of prominent photographers such as Richard Avedon, Margaret Bourke-White and Tim Hetherington, who was killed while covering Libya’s recent civil war. Shockingly, there is even a photograph of veteran combat photographer Dickey Chapelle lying dead, killed in Vietnam, surrounded by soldiers. Idiosyncratically, there’s a small work by Sean Flynn, son of cinematic swashbuckler Errol Flynn who, after an abortive attempt at a film career, became a photographer and went missing in Cambodia along with another photographer. 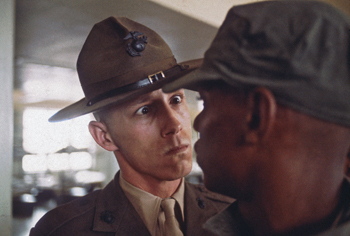 This is not, however, an exhibition about art or famous photographers — many of the images come under the authorship of anonymous.

Rather, it is about the omnipresence of war and how its tentacles — and tools of destruction — can reach into almost any aspect of human life, and death. The images expose moments that are both monumental yet intimate. They recount the sweeping history of war and its evolution, yet they also revive highly personal snippets frozen in time. They are graphic, mundane, precise and blurred, the latter an apt metaphor for the tragedy and fog of war.

To some extent, age and experience will affect reactions to each picture. My own first childhood memory is of a half-destroyed Munich in Germany, watching American tanks roll in among the ruins, GIs throwing out candy bars that kids fought over.

And in such an international city as Washington, D.C., there are certain to be a lot of minefields that will set visitors off. For Americans, it might be the photograph “A Marine Wedding,” showing a radiant bride and a soldier in full uniform, his face radically altered by his wounds.

But for others, it might be Ron Haviv’s portrait of a man returning from the front in 1995 Bosnia only to find his home, and everyone in it, gone. Or Vietnamese women and children trying to escape U.S. napalm strikes, or the Iraqi girl splattered in blood, or the empty stare of a prisoner of war about to be executed by the Khmer Rouge. 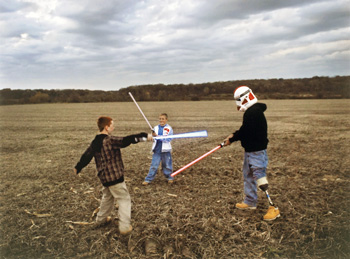 “While the exhibition is of great interest for viewers everywhere, presenting it in the nation’s capital gives it particular resonance,” said Paul Roth, senior curator and director of photography and media arts at the Corcoran. “The camera has allowed people to communicate with each other, across great distances and significant barriers, about the nature of war, and about the experience of soldiers, civilians and leaders. Each photograph tells stories that would otherwise be overlooked or forgotten — about both the courage and resilience of combatants and victims, and about the terrible violence and suffering that inevitably follows from conflict.”

This is a city of monuments to such courage — the Corcoran is a stone’s throw from memorials to the Vietnam War, Korean War, World War I and World War II.

This exhibition goes beyond that. It brings us the faces of the legless, armless and disfigured soldiers of every war, the heroes (depending on whose side you’re on), and the victims of bombs and bullets, stray and intentional. It brings us war, in its unchanging totality, which defies time and place. It brings us the routine of war and its exceptional carnage, and inflicts its wounds with the uncomfortable knowledge that future generations will invariably repeat it.

War/Photography: Images of Armed Conflict and Its Aftermath