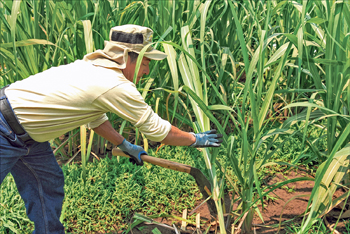 ESCUINTLA, Guatemala — It’s a 30-minute helicopter ride from the shiny glass skyscrapers of Guatemala City to the sprawling La Unión sugar mill in Guatemala’s department of Escuintla, not far from the country’s Pacific coast.

Recently, I got the chance to take such a trip, as a guest of two powerful organizations: the Guatemalan Sugar Producers Association (Asociación de Azucareros de Guatemala, or ASAZGUA) and its social welfare arm, Fundazucar.

A sugar-cane cutter works the fields in Guatemala, which has become the largest sugar exporter in Central America and the third-most productive sugar producer in the world after Colombia and Swaziland.

Upon arrival at La Unión, I fully expected to find dozens of cane-cutters working the fields, filling containers with caña and maybe later eating lunch in a communal cafeteria.

I did not expect to see colorful Spanish-language cartoons on the walls of their army-like barracks, telling these campesinos how to go to the bathroom and use toilet paper. Or food trucks in the sugar cane fields for lunch breaks. Or a social worker in the nearby town of Santa Lucía Cotzumalguapa using handmade puppets to teach expectant single mothers how to care for their new babies.

But I did see all that, and more, in the company of Fundazucar’s assistant director, Griseldo Say López, and ASAZGUA spokesman Otto René Estrada.

What became clear to me after a morning tour of Guatemala’s third-largest sugar operation is that when it comes to efficiency and productivity in the sugar industry, the rest of Central America has a lot to learn.

“Our industry’s competitiveness is based on three elements: productivity, R&D and technology. We offer the best working conditions possible, because this translates into better productivity,” said Estrada, whose organization was founded in 1957 to represent Guatemala’s sugar interests. “All this is based on social responsibility. In an industry as competitive as sugar, we have to respect our workers. This is fundamental.”

Fernando Letona should know. As human resources manager at La Unión, he’s in charge of the well being of 2,800 sugar workers.

“They’re very graphic,” Letona said as we gazed at the huge banners tacked on the walls of the Tehuantepec barracks, which are home to some 400 cane-cutters, known in Spanish as cortadores de caña. La Unión has four more barracks just like Tehuantepec, each with its own dormitories, clinics, dining rooms and exercise areas.

“All these workers have come from the altiplano,” he said, referring to the high plains. “Work hours are 6:30 a.m. until 3 p.m., with a 15-minute rest in the morning and half an hour for lunch. Breakfast and dinner are served in the comedor [dining room], while lunch is served in the field, from food trucks.”

“Before we invested in all this, each cortador was cutting 2.5 tons per day. Now they cut six to seven tons, and some up to 12 tons,” he explained. “It’s evident that this investment has had positive effects on productivity.”

Workers normally earn 3,800 Guatemalan quetzales ($485) per month, which translates into around $2.75 per hour, he said. That doesn’t include fringe benefits, which come to 42 percent of wages. After taxes and social security, workers keep an average of $450 a month.

“Something elemental we’ve done is to give workers dignified, decent jobs so that they’ll feel content with what they’re doing,” Letona said. “You’ll see the same at any ingenio [sugar mill]. Here, workers have the possibility of improving their standard of living.”

Guatemala has seen similar success with its coffee, banana and winter vegetable exports. It is also now becoming a major exporter of African palm oil, an edible oil that is also used to manufacture biofuels.

“You might have the best rainfall, soil, sunlight and fertilizer, but it’s the people who make the bananas grow,” he said. “It’s the men and women who work in the banana industry and have made Guatemala the most productive banana exporter in the world.”

Bruderer insists “there is no intimidation in the banana business,” despite widespread documentation of worker abuses that go back more than a century — and a recent spate of killings of labor leaders who were trying to organize their fellow campesinos. 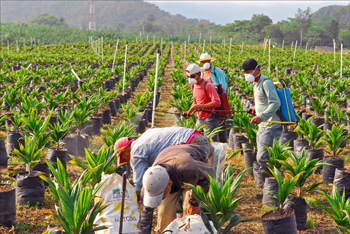 Farm workers spray pesticides on baby African palm trees at the Finca Victoria nursery in Guatemala, about 35 kilometers from the Mexican border.

“Many of the labor leaders here participate in political movements and are exposed to daily and regular violent circumstances as we all are,” he told us. “Our judicial system is not capable of following up on these investigations to determine if the killings were related to labor issues, as they claim to be, or just regular violence.”

Violence is rampant in Guatemala, which saw 5,681 homicides in 2011, according to the United Nations — just over 15 killings a day. With the highest proportion of indigenous people of any country in the Western Hemisphere, Guatemala also ranks as one of Latin America’s poorest nations. Its 15 million inhabitants have been ravaged by a 36-year civil war that ended in 1996, and much of Guatemala’s wealth is concentrated in the hands of relatively few families. Under Guatemalan law, all workers have the right to form unions — as long as a minimum of 28 workers petition for one — but so far, only one of ASAZGUA’s member companies, Palo Gordo, is unionized.

This is one factor, but only one, that explains how Guatemala has become the largest sugar exporter in Central America and the third-most productive sugar producer in the world after Colombia and Swaziland.

Guatemala now ranks as the fourth-largest sugar exporter in the world (after Brazil, Thailand and Australia), according to the International Sugar Organization.

In 2012, sugar exports to the United States, Canada, South Korea, Mexico, Chile, China, Taiwan, Bangladesh and other customers generated $843.7 million in foreign exchange for Guatemala and employed 350,000 people, 73,000 of them directly. That ranks just behind coffee ($955.9 million) in terms of importance for the country, but well ahead of Guatemala’s two other key agricultural exports: bananas ($469.9 million) and cardamom ($250.3 million).

Armando Boesche is general manager of ASAZGUA. In the last 27 years he’s headed the organization, Guatemala’s area under cultivation has tripled, while yield has jumped from 66.3 tons per hectare in the mid-1980s to 95.4 tons per hectare today. 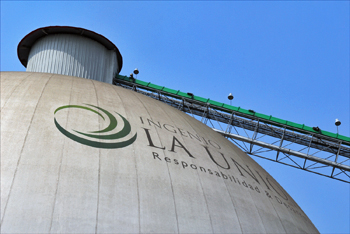 “Guatemala is a small country, not like Brazil or Colombia, so productivity for us is very important,” said Boesche, 73, interviewed at his wood-paneled office on the 19th floor of the swanky Europlaza skyscraper. “With what we export, we could supply all of Central America including Panama.”

Mario Melgar is director-general of the Centro Guatemalteco de Investigación y Capacitación de la Caña (Cengicaña), one of only six sugar research centers financed by the private sector (the others are in Australia, Brazil, Colombia and Ecuador). He partly credits Guatemala’s success with the 1992 establishment of Cengicaña, which has 75 employees and operates on a $2 million annual budget.

“Before that, each mill did its own R&D,” he noted. In the 21 years since Cengicaña’s creation, it’s introduced 1,875 sugar varieties to Guatemala, which now cultivates 235,000 hectares of sugar cane.

Like sugar, palm oil is a commodity that’s very much affected by world prices.

Felipe Molina, owner of Grupo Olmeca, is among the country’s largest exporters of palm oil. His company controls 46,000 hectares cultivated with African palms and employs 22,000 people.

While Molina declined to say how much his conglomerate has invested in palm oil or how much it earns, he did estimate that Guatemala’s production costs come to between $550 and $600 per metric ton — less than Colombia’s $700 per ton but more than Asian producers such as Malaysia ($520), Indonesia ($480) and Thailand ($510).

“In my 23 years in this industry, I’ve sold the same ton of crude palm oil for $250 and $1,200, so how profitable it is depends on commodity prices. You cannot do much about the price.”

But one thing Guatemala does have is land — and vast tracts of scrubland and otherwise unproductive empty space in the departments of Alta Verapaz and Petén are now planted with African palms.

“In Guatemala, there’s a lot of land that is not being used. Planting palms generates income and jobs,” said Alfonso Portugues, agricultural manager at Palmas del Ixcan, which employs 1,500 people in the peak season between June and September, and around 600 during the rest of the year. He says it costs twice as much to produce palm oil in his native Costa Rica as it does in Guatemala.

Portugues, who has a degree in agronomy from the University of Costa Rica and who worked in the banana industry for 20 years, said Guatemala has a potential 650,000 hectares to use for palm oil. Workers earn an average of 85 to 95 quetzales per day (equivalent to about $1.25 an hour) for backbreaking work that requires standing long hours in the sun — often without protection — lifting heavy bunches of palm-oil berries known as racimos, and being exposed to thorny leaves and undergrowth.

Even so, Molina criticizes those at home and abroad who say his industry exploits workers.

“If you go talk to the people who live in these communities, ask them if they’re better off than they were 10 or 15 years ago. They will all tell you they appreciate their jobs compared to when there was nothing,” said Molina.

“We in the agricultural industry are focused on what we can do well,” he added. “But you have to be mature and understand that things are not going to change from one day to the next.”