Home The Washington Diplomat May 2020 Coronavirus Could Upend Yemen’s Long-Running Conflict, for Better or for (Much) Worse 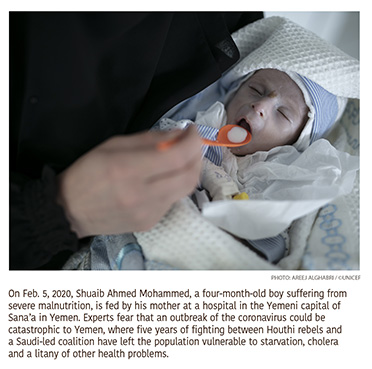 It’s hard to imagine things could get any worse in Yemen, which was already the Arab world’s poorest country before war broke out five years ago between a Saudi-led coalition and Houthi rebels, sparking the world’s worst humanitarian crisis.

With the coronavirus health crisis sweeping the globe, however, experts fear the situation in Yemen could indeed get much, much worse.

But the prospect of a pandemic initially had an unexpected upside: It prompted the Saudi-led coalition to announce a temporary, unilateral ceasefire to help contain the spread of the virus.

Yet with airstrikes around the capital of Sana’a, fighting continuing around key cities such as Marib and Hodeida and a new breakaway attempt by southern secessionists, that widely hailed ceasefire went largely unnoticed by many on the ground.

Despite the ongoing violence, Saudi Arabia — battered by the collapse in oil prices and eager to extricate itself from a war that has drawn international condemnation — recently offered to extend the ceasefire by one month. But the Iran-backed Houthi rebels have thus far rejected any truce, demanding more concessions from Riyadh — namely the lifting of air and sea blockades — before agreeing to resume U.N.-backed peace talks.

The logjam has dashed hopes that the Covid-19 crisis might provide a window for the warring parties to take up U.N. Secretary-General António Guterres’s plea for worldwide ceasefires to help countries focus on fighting the pandemic.

Despite the disappointment, the need for an immediate halt and negotiated end to the conflict remains acute.

“The most important priority right now is to put an end to the violence,” Aaron Brent, Yemen country director for the humanitarian aid agency CARE International, told us by phone from Sana’a.

“We are at the beginning of cholera season, with over 100,000 suspected cases this year already, while around Marib there are already some 800,000 internally displaced persons,” he said. “If the fighting reaches Marib city, there could be half a million more people displaced, too. Meanwhile, we have a broken economy and a global pandemic arriving. This just has to stop.”

Despite Guterres’s calls and growing conflict-fatigue in Riyadh, however, recent gains on the battlefield by Houthi forces, combined with the fragmentation of the Saudi-led Arab coalition, may complicate efforts to stop the fighting.

The U.N. secretary-general first called for a global ceasefire on March 23, declaring that the “fury of the virus illustrates the folly of war.” Two days later, Guterres made his plea more specific to Yemen, urging all parties to work with the U.N. special envoy to the country, Martin Griffiths, in securing a “comprehensive and sustainable resolution of the conflict.”

That conflict erupted after Houthi rebels — frustrated by a lack of political representation — ousted the internationally recognized, Saudi-backed government of President Abd-Rabbu Mansour Hadi in late 2014.

The takeover by Houthi rebels — nominally aligned with Iran — sparked fears in Saudi Arabia that Iran, the Sunni kingdom’s Shiite archrival, would gain a foothold next door. So Riyadh teamed up with the United Arab Emirates and other Arab partners and launched a bombing campaign to restore Hadi to power.

But the military campaign failed to dislodge the Houthis. Instead, Saudi Arabia — and its brash, de facto ruler, Crown Prince Mohammed bin Salman — came under increasing criticism for the indiscriminate shelling of civilians (also see “Fighting Not to Be Forgotten: Five Years After Saudi-Led Intervention, Yemen Remains Mired in Suffering and Stalemate” in our March 2020 issue).

Amid growing international pressure, a bogged-down military campaign and an economic crisis back home, Saudi Arabia appeared to have answered Guterres’s plea by unilaterally announcing a two-week ceasefire to start on April 9.

Coming after several weeks of unofficial talks between the Saudis and the Houthi movement, officially known as Ansar Allah, the ceasefire initially looked promising. It marked the first time that the Arab coalition offered to suspend hostilities since 2016, and it came despite an earlier flare-up of violence between the Houthis — who had lobbed a missile toward Riyadh — and the Saudi-led coalition, which launched a fierce aerial bombardment in response.

Yet the Houthis never signed on to the ceasefire, instead referring to conditions contained in their own “roadmap” for de-escalation, which requires an end to the Arab coalition’s economic blockade of Houthi-controlled territory, alongside a withdrawal of coalition forces. As these demands were unmet, the conflict continued, with both sides accusing the other of violating the ceasefire, whether they had agreed to it or not.

While this was by no means the first such hope to have rapidly failed on the ground, this time, the reluctance of the Houthis to come onboard may well be because a new phase in the war is now underway.

“The Houthis are feeling emboldened,” said April Longley Alley, deputy program director for the Middle East and North Africa at the International Crisis Group. The reason for this is that “in the northwest, they have very much consolidated control and are militarily dominant there.” The Houthis are also expanding toward the government’s last stronghold northeast of Sana’a, in the resource-rich Marib province, Alley said. “And their enemies are internally divided.”

There, the Arab coalition fragmented last year after its main non-Saudi foreign military backer, the UAE, drew down its forces and replaced them with locally trained troops.

Those troops are largely affiliated with the Southern Transitional Council (STC) — supporters of southern secession, which is anathema to Hadi’s internationally recognized government (IRG). 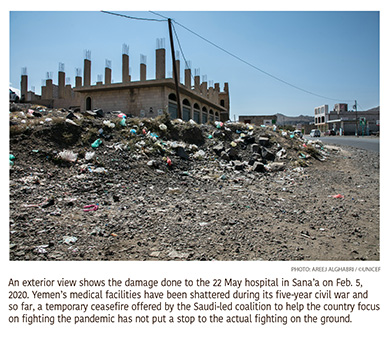 There was an outbreak of fighting between the UAE-backed STC and Saudi-backed IRG late last year, a disaster for the coalition that was eventually untangled by the Riyadh Agreement of November 2019.

This agreement, however, appeared to have broken down by late April of this year, when the STC declared that it would self-govern the south’s largest city and de facto capital, Aden, along with other southern provinces.

The existence of the STC, in fact, highlights the traditional north-south divide in the country, with the south having been an independent country up until 1990, when the northern and southern states united to form the modern republic of Yemen after decades of civil war.

The STC’s announcement further throws peace prospects into disarray, with the Saudi-backed coalition warning that it would have “catastrophic consequences.”

The southern split also underscores the radically different aims of the many groups within the anti-Houthi coalition. Meanwhile, the IRG itself is divided, with pro-Saudi factions trying to shore up the Riyadh Agreement, while elements closer to the pro-Qatari Muslim Brotherhood are against further concessions on southern autonomy.

At the same time, there is clearly growing fatigue with the conflict in Riyadh.

The war is now entering its sixth year, with the cost in lives and materiel mounting. In addition, fighting has repeatedly spilled over into Saudi Arabia, both along the border with Yemen and also via Houthi missile and drone attacks. The most well-known of the latter was the alleged Houthi drone strike on Saudi ARAMCO oil facilities in the east of the kingdom, carried out last September (although most observers attribute the attack more to Iran than the rebels themselves).

Covid-19 and the resulting oil crisis, in which Saudi Arabia has struggled with Russia and other countries to stop the rapid freefall in oil prices, have also severely strained the kingdom’s already-troubled economy. In 2019, Saudi GDP grew by just 0.3%, according to Capital Economics — not nearly enough to keep bankrolling an economy almost entirely subsidized by oil.

The conflict has also hurt Crown Prince Salman’s efforts to attract foreign investment — indeed, many of the areas near the Yemeni border had been touted as tourism development zones — and has prompted rare criticism of Saudi Arabia from traditional allies such as the U.S. and U.K., which have been pressuring the kingdom to find a negotiated solution to the war.

Yemen has reported only one confirmed case of the novel coronavirus, although that’s likely because the country lacks testing capabilities. Coupled with the country’s shattered medical system, aid groups fear that an outbreak of coronavirus among Yemen’s malnourished population would be catastrophic.

On April 17, a week after Yemen reported its first case of coronavirus, the U.N. Security Council gave its backing to the Saudi unilateral ceasefire, even though the ceasefire had already largely unravelled on the ground. Indeed, that same day, the Houthis accused the Saudi-led coalition of violating its own ceasefire 82 times in the previous 24 hours, while the IRG news agency accused the Houthis of killing a woman and two children in artillery strikes on government-held territory.

Yet, there still may be reason not to give up hope on Martin Griffiths’s U.N. peace mission.

“Yemen is a highly complex place,” said Longley Alley, “and no one group will dominate over time. Historic divisions inside the country mean there are limits to how far the Houthis can push control. To think they can go back into the south and dominate is unrealistic.”

The Houthis did initially welcome Guterres’s ceasefire plea, although a comprehensive package would likely be more acceptable to them than just a temporary ceasefire — especially one that could be read as a tactical maneuver by the Saudis to blunt the Houthis’ military momentum.

“There will have to be concessions,” said Longley Alley. “There are pockets on the ground that aren’t going to give up what they’ve gained unless it is part of a wider settlement.”

The pandemic may in fact offer the Saudis an excuse to offer that settlement without looking as if they are caving to the Houthis — while giving the Houthis a reason to accept it, ostensibly in an effort to save the country from a health calamity.

In that sense, Covid-19 may provide cover for a more durable ceasefire and negotiated settlement — ironically helping all sides save face even as it threatens lives across the fragmented country.