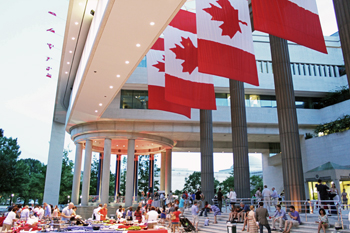 For a pair of large countries with global clout that share some 4,000 miles of border (5,500 miles if you count Alaska), the United States and Canada get along well. There is the occasional trade spat, bridge dispute, and disagreement over policy in Afghanistan, but these things are largely navigable. Canada, needless to say, doesn’t provoke near the amount of anxiety in U.S. lawmakers that America’s other big neighbor, Mexico, does.

So one might think lobbying for closer U.S.-Canada business ties is a simple task. But that would underestimate the way bilateral relations can be swept up and forgotten in the distortions of everyday politicking in Washington, D.C., and Ottawa. When this distortive tide swells above a high-water mark, the Canadian American Business Council (CABC) is there to hold the heads of politicians in both towns above water and keep their eyes on the broader scope of bilateral relations.

While the CABC is in favor of Keystone XL, the controversial 1,700-mile pipeline that would bring bitumen from oil sands in Alberta to refineries in the Gulf Coast, it takes a long view of bilateral relations in deciding not to be uncompromisingly for the project.

“We are in favor of the project, but we are also in favor of the broader bilateral relationship, the context in which that decision is being made,” Maryscott “Scotty” Greenwood, a senior adviser at CABC, told The Washington Diplomat recently. The council has made public comments on the proposed Keystone project like countless others have, but has not let the project overshadow its other work.

The Canadian American Business Council (CABC) recently hosted a July 4th celebration at the Canadian Embassy in Washington. The council was established in 1987 to promote business ties between the two neighbors, which are the world’s largest trading partners.

The CABC’s dozens of corporate members include firms with big North American footprints like Chrysler, General Electric and Shell (TransCanada, the company behind Keystone, is also a member). Basic annual membership costs $5,500, while sponsorship of special events, such as the CABC’s July 4th celebration at the Canadian Embassy in Washington, can run $25,000 or more.

The group set up shop in Washington, D.C., in 1987 to shine a light on the potential of cross-border commerce. Bilateral trade has ballooned from roughly $211.7 billion in 1993, the year before the North American Free Trade Agreement (NAFTA) took effect, to $616 billion in 2012, according to data in nominal dollars from the U.S. Census. Canada is America’s largest trading partner, with roughly $1.3 million in goods and services traded every minute.

Canada is also the largest customer for American goods and could feature prominently in President Barack Obama’s effort to ramp up exports. Obama has set a goal of doubling U.S. exports from 2010 to 2015 and has embraced the Trans-Pacific Partnership (TPP), a proposed 12-member free trade agreement that includes Canada and Mexico and has been billed as a successor to NAFTA.

Extolling the virtues of free trade is a weekly, if not daily, task at the CABC. Having been there every step of the way as bilateral trade blossomed through the 1990s, the council can now point to the growth as inexorable and ask policymakers if they want to get in the way or get involved.

But the word “NAFTA” is not necessarily part of CABC’s free-trade pitch, Greenwood said. Phrases like “North American economic integration” are more common when the council speaks to American audiences. The trade pact became a dirty word in the U.S. Democratic Party’s presidential primaries in 2008 when then-candidates Obama and Hillary Clinton skewered NAFTA as bad for the middle class and pledged to renegotiate it if elected (Obama, as president, has not followed through).

“During that campaign, NAFTA was more of a placeholder for general economic anxiety,” said Greenwood, who served as chief of staff at the U.S. Embassy in Ottawa in Bill Clinton’s administration and is now a senior managing director at the law firm of McKenna Long & Aldridge. “People were really worried about jobs going overseas and jobs in general. And I think they sort of vented the anxiety on NAFTA.”

There’s no reason for a trade chamber to get involved in political playacting, but a line is crossed when the legality and integrity of NAFTA is questioned. The CABC felt it had to enter the fray in 2005 when an American lumber group questioned the constitutionality of NAFTA after the treaty’s arbitration panel required the reduction of U.S. duties on Canadian softwood lumber (the United States had slapped tariffs on Canadian lumber, saying the country’s federal and provincial governments were unfairly subsidizing the lumber industry).

In the council’s view, the argument struck at the core of Canadian-American relations and was not made in good faith. So Greenwood and her colleagues rose to “defend the integrity of NAFTA.” When the disagreement dragged on so long that it threatened to disrupt trade relations, “our position became: ‘Don’t let this issue stand in the way of a good relationship,'” she recalled. (Both sides settled the longstanding lumber dispute in 2006.)

The council sees that the broad thoroughfare of cross-border commerce stays smooth while leaving aside the smaller squabbles. But the goal of keeping open a border that some 400,000 people cross each day sometimes runs up against a sense of insecurity felt on both sides. The Western Hemisphere Travel Initiative, which took effect in 2009 based on recommendations from the 9/11 Commission, sought to close a loophole allowing travelers to re-enter the United States from Canada without a passport.

What “concerned us was if this initiative were enacted or implemented too quickly, that it would have a harmful effect on the normal day-to-day commerce,” Greenwood said. The largest bilateral trade relationship in the world — between two countries that also share the longest international border — was at risk of being undercut by security measures. The CABC lobbied the commission for more time and help set up pilot projects between British Columbia and Washington state where something short of a passport — a driver’s license, for example — could get you over the border.

Greenwood and her colleagues view the gradual implementation of the Western Hemisphere Travel Initiative as one of their greatest policy accomplishments in their more than a decade with the council. CABC’s recommendations for implementing the travel initiative “ultimately were enacted and I think we know that they’re successful by the fact that you’re not writing about it after that because it’s not controversial,” Greenwood reflected. 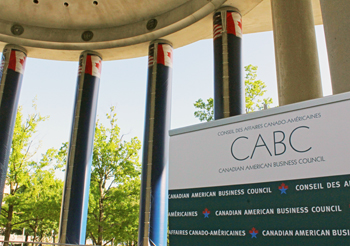 A sign for the Canadian American Business Council stands outside the Canadian Embassy during a July 4th celebration. Bilateral trade between Canada and the United States has ballooned since NAFTA took effect, with some $1.3 million in goods and services traded every minute, but occasional trade spats and tensions still occur.

To CABC’s chagrin, the Keystone pipeline is the controversy that won’t go away.

The State Department’s initial approval of the pipeline was overturned last year by President Barack Obama, who cited environmental concerns. He is expected to make a final decision on the project later this year.

“Allowing the Keystone pipeline to be built requires a finding that doing so would be in our nation’s interest,” Obama said in a June speech seen as a pronouncement of his second-term environmental policies. “And our national interest will be served only if this project does not significantly exacerbate the problem of carbon pollution.”

Those words were welcomed by environmental groups that are casting Obama’s decision on the pipeline as a litmus test for the U.S. government’s willingness to tackle climate change. But the president could also have been hinting that the pipeline might go through if the mining companies involved offer concessions to offset greenhouse gas emissions.

Those conditions would probably not satisfy environmental groups that say Keystone XL represents the expansion of a dirty industry.

Production of Canadian oil sands could jump from 1.8 million barrels per day last year to 5.2 million daily barrels in 2030, according to the Canadian Association of Petroleum Producers (which happens to be a CABC member). This expansion of production could increase toxic waste from mining operations by 150 percent and carbon pollution by 250 percent, reckons the Pembina Institute, a Canadian environmental group.

Environmentalists such as James Hansen, longtime head of the NASA Goddard Institute for Space Studies in New York, say Keystone is integral to the tar sands industry’s expansion plans. “The idea that the tar sands would get developed at the same rate without the pipeline is undercut by mainstream financial analysis and industry documents that show Keystone XL is the linchpin for tar sands expansion in the next decade,” Hansen, who first warned about climate change in 1988, wrote in a recent Los Angeles Times op-ed. “All of President Obama’s achievements will fade if he doesn’t act swiftly and decisively on climate change. Rejecting Keystone is the first step.”

But Greenwood has a quick rebuttal to claims of Keystone XL’s environmental degradation: “The carbon impact to the planet if you don’t build the project is actually more severe,” she argued, offering this hypothetical: Would opponents of the pipeline rather have Canadian oil sands taken by tanker across the Pacific Ocean to be burned in China, the world’s biggest carbon polluter?

“As long as we’re using oil, would we rather get it, from an American point of view, from Canada or from somewhere else?” And one more question: “What’s the most environmentally responsible way to transport it? And when you look at it from that point of view, there’s no question to us that the project makes sense,” Greenwood concluded.

But the debate over North American energy triggered by the pipeline is far from over and could carry on for years. The CABC, having made its case for the project, thinks the proof will be in the pudding. “If the Keystone XL pipeline is approved, 10 years from now people will take it for granted even though it’s a big controversy now,” Greenwood predicted.