Home The Washington Diplomat August 2013 At Fiola, Maestro Wunderkind Comes Down to Earth With Heavenly Creations 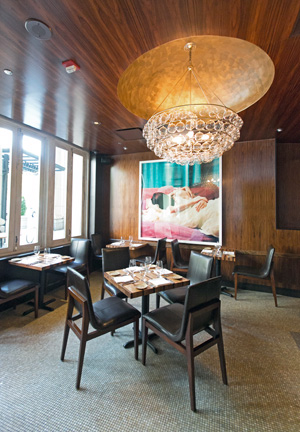 After helming the widely acclaimed Maestro, chef Fabio Trabocchi returned to his Italian roots for Fiola, a modern upscale trattoria that will soon be joined by two more casual Trabocchi ventures in D.C.

When Fabio Trabocchi returned to Washington in 2011, it was to open Fiola, the first restaurant of his own. The location was significant. It was the spot where Bice once operated, and where he began his career in Washington. The goal of Fiola, a modern upscale trattoria, was to use traditional Italian dishes, many of which Trabocchi learned as a child growing up in Le Marche (a heavily agricultural region of Italy on the Adriatic Coast), as a springboard for his modern adaptations.

The chef was laden with accolades for his modern interpretations helming Maestro, the ultra haute restaurant in the Tysons Corner Ritz-Carlton. He was named Food & Wine magazine’s best new chef in 2002, chef of the year in 2005 by the Restaurant Association of Metropolitan Washington, and the James Beard Foundation’s best chef in the mid-Atlantic in 2006. In 2007, he left Maestro to open Fiamma in New York. Despite earning high praise from critics, and changing the menu to make it more broadly accessible, the primary owner closed Fiamma to open another concept in the space.

Some initial reactions to Fiola suggested that Trabocchi did not reach the same pinnacle that he’d achieved guiding the kitchen of the acclaimed Maestro. But he had returned from New York with a lesson learned from the economic downturn — that even a much-lauded restaurant can be too expensive to survive. And the Maestro model was an exorbitant one.

Trabocchi’s dishes at Maestro were renowned for their subtly and complexity, and while nominally Italian, borrowed heavily from French cuisine. Everything was perfectly fresh, but the emphasis was not on locally sourced, seasonally available ingredients. Rather it was based on getting just the right ingredients from wherever necessary, regardless of cost.

At Fiola, the Italian origins are more direct and the approach simpler. The menu is structured as a typical Italian meal, with choices of antipasti, pasta, fish, main meat courses, vegetable sides, and sweets and cheeses. Throughout, Trabocchi hews to the cornerstone of Italian cooking: fresh, seasonal and locally grown produce — the kind his father used to pick out at the farm and prepare the next day for the family on Sundays.

Fiola’s menu changes daily, based on what’s available. This time of year, when local produce is abundant, Trabocchi offers an education on how even something as plain as summer squash can be transformed. On a recent visit, the menu featured a side dish of roasted pattypan and long neck squash served over a meatless tomato ragu and accented with unsmoked bacon and basil. The dish, stunningly perfect in its simplicity, gives the false impression you could just whip it up at home. At its core, that is what Italian cooking is all about, and it highlights the fundamental difference between Maestro and Fiola. The former was awe-inspiring but rather foreboding, the latter comprehensible and inviting. 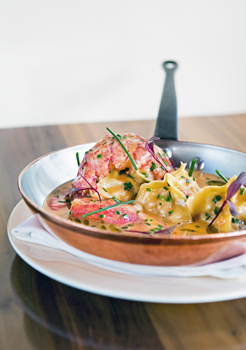 That said, Trabocchi has not sacrificed any of his creativity. Fiola’s dishes demonstrate his hallmark ability to texture and layer flavors, but on a less rarified scale. A house special, the veal chop, prepared with alba hazelnuts, sautéed wild mushrooms, ossobuco sauce and gremolada, is a robust combination with an almost earthy appeal. The pappardelle pasta reveals rich dairy notes of parmigiano that give way to a slightly acidic ragu Bolognese melded with aromatic homemade sausage and the savory balance of royal trumpet mushrooms. And the Guinea hen, smoked with hay, is paired with meaty eggplant, sour cherries, rich foie gras and a nutty marsala. It is these unexpected, but delicious, combinations that offer a window into Trabocchi’s talent.

But not all of the dishes at Fiola depend on complex combinations for their effect. Some focus on highlighting the primary ingredient. The daily choice of fresh fish, for example, is grilled simply with only lemon or salsa verde, a risky approach unless you cook the fish perfectly, which Fiola’s kitchen does.

As a coastal area, fish and seafood are central elements of the cuisine from La Marche, so naturally Trabocchi has included them throughout Fiola’s menu. Brodetto, a fish stew from the Adriatic Coast, demonstrates Trabocchi’s mastery of the traditional. His version, which varies daily, consists of a main fish (on recent visits it was Atlantic wolffish and branzino) cooked in a light tomato-based broth with an assortment of shellfish, in the shell. While light, the intense seafood flavor makes it a thoroughly satisfying dish. 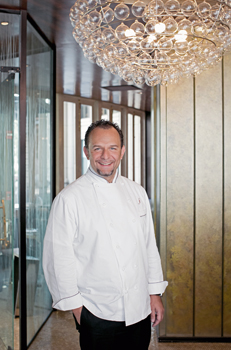 But perhaps one of the best seafood renderings is the Ahi tuna carpaccio. In Trabocchi’s version, which is more substantial than others, chunks of the tender raw tuna sit on a bed of roasted tomatoes, just slightly darker in color than the fish, and are topped with skinless segments of sweet Meyer lemon, taggiasche olives, yuzu juice, and a dollop of a slightly bitter sorrel cream.

One of Trabocchi’s strategies is to surround himself with talent that rivals his own. He tapped existing relationships and D.C.’s expanding pool of restaurant professionals to create a team at Fiola that could ensure a consistent level of quality and performance. To handle the dolci side of things, he recruited longtime colleague Tom Wellings, who worked with him at Maestro and Fiamma and also served as pastry chef at both Equinox and Restaurant Eve before joining Fiola.

Wellings refines and updates classic Italian desserts, producing specialties such as the Bomboloni — light-as-air ricotta doughnuts served with a dense burnt honey gelato. His panna cotta, made with goats milk and paired with fresh fruit and a fruit sorbet (recently sour cherry), is much more intensely flavored than the typical version. Layering is also evident on the dessert menu, literally. The Zuppa Inglese is a parfait-style delight of mascarpone custard, cake, Limoncello granita and macerated berries. Scooping down through the dish, you get a bite that is sweet, tart, cold and creamy all at once. One thing to note, Wellings’s desserts are consistently less sweet, in some cases considerably so, than their traditional counterparts.

Trabocchi also brought on Jeff Faile, an accomplished mixologist formerly with Palena, to create a beverage program for Fiola that would complement his focus on fresh ingredients and distinct flavors in classic yet innovative preparations. Faile’s beverage menu offers an extensive array of aperitifs, negroni, cocktails, bottle craft beers and artisanal liquors. Even among the increasingly whimsical cocktail concoctions at top area bars, Faile’s pairings stand out.

For instance, Ain’t That a Daisy, a Milagro Tequila-based drink, introduces hibiscus cordial as the dominant note. Lime and grapefruit juice balance the floral element for a totally tropical (bit not too sweet) effect. On the darker side¸ Smoke Gets in Your Rye is an almost menacing brew of Rittenhouse Rye whiskey, Los Amantes mezcal, Cocchi Vermouth, Averna liqueur, habanero tincture (a concentrated alcohol infusion) and chocolate bitters. The Jolanda, on the other hand, made with Maraschino liqueur and prosecco, is a sweet little flibbertigibbet of a drink.

One major criticism of Fiola lies in calling itself a trattoria, albeit an upscale one. One tends to think of a trattoria as an eating place for the people. Not so at Fiola. It is very expensive, though not on the scale of Maestro. Its décor is appealing, but undeniably elegant (though without the bland understatement that characterized Maestro), despite the exposed brick designed to lend a rustic air that echoes the down-to-earth nature of the menu.

Perhaps that’s why Trabocchi is diverging from Fiola’s upscale roots to open two more low-key restaurants in D.C., the casual Casa Luca, which opened in July in the space that once housed the gastropub Againn, and seafood-focused Fiola Mare, scheduled to debut at the end of the year in the Washington Harbour.

The ventures show that the venerated chef is not only back in town, but here to stay and further refine his craft. While Maestro was a showcase of a talented young chef’s technical expertise and creative brilliance, Fiola feels like the confident assertion of a more mature restaurateur comfortable with keeping things simple.