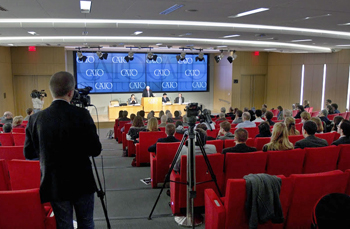 As diverse as the United States is, its political system is unflinchingly bipartisan. The narrow two-party system that dominates the country, though, doesn’t always translate into actual bipartisanship.

Voters who believe in the power of government to help solve social problems and seek to promote and protect diversity generally align themselves with the Democratic Party, while those who believe in a more limited role for government and a more traditional concept of American society side with the Republican Party.

But what of voters who take a little from both? Maybe they believe in government austerity but also gay marriage, or perhaps they support immigration reform and drug legalization while opposing restrictions on guns and banks. Well, they’re libertarians, and despite their failure to break open the bipartisan edifice, they are constantly knocking at its door.

The Cato Institute is a libertarian think tank in Washington, D.C., that eschews traditional right and left political positions — supporting, for instance, gay marriage and drug legalization but not financial regulation or gun restrictions.

There are still plenty of voters in the United States who identify themselves as independents and have no allegiance to either party. But that’s distinct from libertarians, who espouse competing — even at times seemingly bipolar — political views.

“You might say libertarians are fiscally conservative and socially liberal,” explained Aaron Ross Powell, a research fellow at the Cato Institute, a libertarian think tank in Washington, D.C.

Though libertarians exist in many shades, he said, they draw from — and often reject — political positions championed by both right and left, Republican and Democrat. In a divided capital where left and right are as starkly different as black and white, libertarianism provides not so much a middle ground, but a refreshing shade of gray.

“The presumption is always in favor of liberty, and it’s the people who would want to restrict liberty that would have to make an argument for why,” said Powell of libertarianism’s guiding mantra, both at home and abroad.

Since its founding in 1977, the Cato Institute — named after Cato’s Letters, a series of 18th-century essays expounding the views of philosopher John Locke — has promoted libertarian ideals through research, publications and conferences. According to the group, the principles of “individual liberty, limited government, free markets and peace” underline its work.

With a staff of 100 and a 2011 budget of $23.6 million, the institute has injected itself into Washington’s political discourse by holding elected officials — no matter the political party — to account for any apparent restrictions on economic or social freedoms.

During the presidency of George W. Bush, it backed him on the privatization of Social Security while opposing him on the Iraq War and his stance on same-sex marriage; during President Obama’s two terms, it expressed support for immigration but opposed his signature health care overhaul and any efforts to curb gun ownership.

Cato’s work hasn’t been limited to domestic matters, though. On top of opposing many of the conflicts the United States has become embroiled in, the institute has recognized that the fight for economic and social liberty takes place across the world. Since 2002, it has awarded the biennial Milton Friedman Prize for Advancing Liberty (and its $500,000 prize money) to a dissident or critic abroad; in 2008 Venezuelan student leader and lawyer Yon Goicoechea won the prize, while in 2012 it was given to Chinese economist Mao Yushi.

Interestingly, in 2010 the prize went to Iranian journalist and writer Akbar Ganji, who — despite being a vocal pro-democracy activist — criticized the United States for trying to impose its will on the Islamic republic in a blunt speech that clearly made a few conservatives in the audience uncomfortable. He specifically called out America’s “double standard” in its approach to Israel and Iran’s nuclear programs, warning that the regime in Tehran would exploit this double standard.

Those comments stood in stark contrast to the more standard pro-Republican rhetoric earlier in the night, as conservative columnist George Will and Cato President Ed Crane lambasted the Obama administration and European-style socialism.

The schizophrenic speeches were an example of how Cato — whose supporters often include Republican corporate titans — isn’t afraid to ruffle feathers. That ideological independence came under attack in 2012 when a dispute between the organization’s founders led to lawsuits brought by billionaire industrialists David and Charles Koch, two of Cato’s four founding shareholders. Critics of the Koch brothers worried that they wanted to push the institute closer to the GOP Party, sacrificing its ability to chastise even Republican officials for not hewing to libertarian principles. 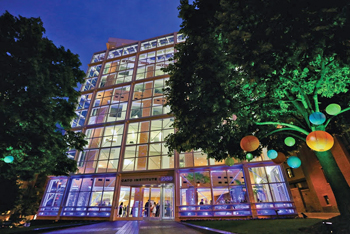 Since its founding in 1977, the Cato Institute — named after Cato’s Letters, a series of 18th-century essays expounding the views of philosopher John Locke — has promoted the libertarian ideals of individual liberty, limited government and free markets.

It was a surprising rift — the Koch family had donated some $30 million to Cato since its establishment. But when the Koch brothers tried to replace the institute’s libertarian board members with their own handpicked choices, the backlash was fierce.

He argued that the Koch brothers were trying to corrupt Cato by making it produce research to suit their political agenda — the type of politicization that discredits other think tanks and turns them into rubberstamp research centers for special interests.

“Do [Koch-affiliated] groups really want to hear detached scholarship arguing that security threats are overblown, that immigration is a net plus for the country, that the war on drugs has pointlessly killed tens of thousands of Mexicans, and that the United States should dramatically scale back its global military ambitions? Probably not,” Logan wrote.

In June 2012, though, an agreement was brokered to settle the matter, creating a 12-member board of directors that includes David Koch. Cato President Ed Crane, a Koch critic, was also replaced. John Allison, a former chairman and CEO of BB&T Corp., now heads up the institute.

In a joint statement, Cato and the Koch brothers said “the agreement confirms Cato’s independence and ensures that Cato is not viewed as controlled by the Kochs.”

The Cato Institute has earned praise as an important independent voice, despite being neither Democrat nor Republican in a town that is. In 2012, the University of Pennsylvania’s Think Tanks and Civil Societies Program ranked Cato as the 19th-most influential think tank worldwide, putting it in an elite category populated by the likes of the Brookings Institution, Chatham House, the Council on Foreign Relations, and the International Institute for Strategic Studies.

But for all the independence and political freedom that libertarians and the Cato Institute may have, they haven’t succeeded in another important realm: at the ballot box.

In the 2012 presidential election, libertarian candidate Gary Johnson only received 1.2 million votes nationwide — just shy of 1 percent of the vote. The Libertarian Party’s best showing since it started running candidates in 1972 was in 1980, when Ed Clark claimed just over 1 percent of the national vote.

Powell explains that libertarians have had trouble converting their values into votes because they decry one of the most effective and time-tested means of winning elections: promising tangible benefits to voters.

“There’s the sense that one of the ways that you can win an election is to promise goodies to voters, to say, ‘Look, if you vote for me I will get subsidies for your farms or I will increase the benefits we’re giving you or I’ll channel factories to your town.’ A libertarian simply wouldn’t do that. They would allow the free market to allocate resources,” said Powell, who’s also the editor of Libertarianism.org, a Cato project.

“It can be a harder sell to say to people, ‘Look, if you vote for me we’ll increase freedom and things are going to get a lot better and we’re all going to get wealthier, but it’s going to mean that you’re going to have to give up these particular benefits you’ve been getting.’ Voters are often hesitant to do that, so we have to convince them that freedom will get you more,” he said.

Libertarianism’s political fortunes may be changing, though. Not only are younger voters more progressive on many social issues, but they have lived through years of political gridlock between the two parties on issues such as spending and the budget deficit. Many are also saddled with high levels of debt and have never known their country not to be at war.

Recent developments such as the Internal Revenue Service’s aggressive focus on tea party groups and extensive wiretapping operations by the National Security Agency may also be giving credence to the libertarian belief that big government is a threat to freedom.

This shifting dynamic has best been expressed by Sen. Rand Paul (R-Ky.), who despite his Republican affiliation has publicly espoused libertarian-leaning views since he joined the Senate in 2011.

In early March, Paul, the son of former libertarian presidential contender and ex-Congressman Ron Paul (R-Texas), attracted wide acclaim for a 13-hour filibuster aimed at raising concerns about the use of drones abroad and at home. He has also aligned himself with liberals on many social issues, and in a May interview with Wired magazine outlined a libertarian strategy that could help Republicans win more elections.

“The way we’re going to compete is by running people for office who can appreciate some issues that attract young people and independents: civil liberties, as well as a less aggressive foreign policy, not putting people in jail for marijuana, a much more tolerant type of point of view,” he said.

Recently, though, Paul’s political ambitions were sidetracked by revelations that one of his top aides once advocated Southern secession and praised the assassination of Abraham Lincoln in writings that seemed to reek of racism. Matt Berman of the National Journal wrote that the controversy, while most likely fleeting, represents a more deep-seated problem for Rand and libertarians in general, who can’t seem to shake the “wacko-bird fringe” often associated with the movement.

Over the years, there have been other sporadic attempts to create third party alternatives that could challenge America’s two-party establishment, such as Ralph Nader’s Green Party and Ross Perot’s Reform Party — to little avail.

Whether or not libertarians are able to break into the mainstream and win office, though, Powell says that maintaining an outside voice in Washington is where the Cato Institute can set itself apart from other think thanks that are more closely aligned with Democrats or Republicans.

“I think our broad role is to keep everyone honest. Since we don’t have party commitments we can approach ideas objectively. We can do that without the burden of having to support our guy or having to make sure that Democrats win elections or Republicans win elections,” he said. “We can be fair and honest.”