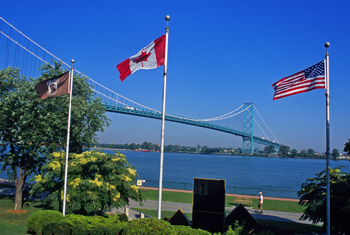 The two most important border crossings between the United States and Canada — which share the longest and busiest uninterrupted frontier between any two countries in the world — are the highly symbolic Peace Bridge and the Ambassador Bridge.

Yet recent plans to expand the 3,580-foot-long Peace Bridge, which links Buffalo, N.Y., and Fort Erie, Ontario, haven’t been exactly peaceful. And a long-running dispute over replacing the obsolete Ambassador Bridge between Detroit and Windsor, Ontario, has prompted Canada’s actual ambassador, Gary Doer, to demand immediate action — all this at a time when bilateral ties have been focused on the proposed $7 billion Keystone XL pipeline linking the oil sands of Alberta to refineries in the U.S. Gulf Coast (a project Doer has been actively lobbying for).

It also comes as 30 of Doer’s own staffers in Washington — most of them high-ranking officials — are on strike against their own federal government in Ottawa, part of a labor dispute that’s lasted since April and shows no sign of slowing down.

Canadian and U.S. flags fly over the Ambassador Bridge in Windsor, Ontario. The Canadian government and many U.S. officials and businesses support replacing the aging suspension bridge, but a Michigan tycoon who owns the Ambassador Bridge has blocked efforts to build a new $2.1 billion crossing between the U.S. and Canada.

Doer did manage to quell another dispute that spans vastly different terrain. On June 26, the ambassador and New York Gov. Andrew Cuomo signed an agreement to cement improvements to the Peace Bridge, narrowly averting a bill in the New York state legislature that would have abolished the 80-year-old binational authority that supervises the famous bridge over the Niagara River.

“It’s called the Peace Bridge; it’s not called the Conflict Bridge,” Doer told reporters at a Buffalo press conference, with David Jacobson, the departing U.S. ambassador to Canada, at his side. “This is a good deal for hard hats, not lawyers.”

That’s a lot more, well, diplomatic than the way his administration was sounding just a few months ago, when Cuomo’s chief representative to the Buffalo and Fort Erie Public Bridge Authority criticized his Canadian counterparts for their “deceitful, disrespectful and arrogant behavior.”

The surprising war of words between the two normally friendly neighbors (perhaps more surprising that it involved Canadians than the feisty Cuomo administration) began when Canadian officials demanded to know why their counterparts in New York wanted to spend millions of dollars more than the appraised value for a piece of land near the U.S. side of the Peace Bridge. According to the New York Times, Cuomo’s rep, William B. Hoyt III, even tried to have the authority’s Canadian general manager fired. The Canadians were reportedly shocked at the personal attacks leveled against them.

There was mudslinging on both sides, though. Hoyt accused the authority’s general manager of hiring his son’s air charter business to transport authority officials, while the authority’s Canadian chairman had to undergo sensitivity training after calling an American bridge project manager “the governor’s concubine.”

But now it seems peace has finally been restored to the Peace Bridge.

“We prefer partnership over litigation; we prefer action over congestion,” Doer told reporters, adding that the deal “respects the board’s fiduciary responsibility.”

The four-page accord — which came after intense negotiating on both sides, including six hours of deal making led by Doer himself — leaves the Buffalo and Fort Erie Public Bridge Authority intact. 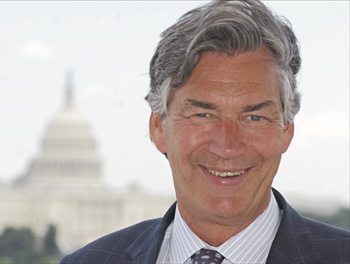 Ambassador of Canada to the United States Gary Doer

It calls for three specific projects to begin quickly and simultaneously: widening the toll plaza on the U.S. side, a pre-inspection project to have U.S.-bound cargo trucks examined in Fort Erie to reduce congestion and pollution on the American side, and various improvement initiatives for the U.S. plaza. According to the Toronto Star, the Peace Bridge Authority will contribute up to $50 million for the projects, while the rest — about $15 million — will come from New York state. In addition, a permanent, $30 million pre-inspection facility is planned, though funding is still to be determined.

“The road map for progress at the Peace Bridge represents a mutual understanding that trade, travel and good relationships benefit Americans and Canadians alike,” said a press statement by Transport Canada that was provided to The Washington Diplomat by a spokeswoman at the Canadian Embassy. “The Peace Bridge is an essential part of both countries’ infrastructure. With $40 billion in trade crossing the Peace Bridge annually, it has a vital role in facilitating trade, creating jobs and supporting both economies.”

In fact, few Americans realize the extent of that trade (also see “Council Smoothes Occasional Hiccup Between Indispensable Trade Partners“). According to a Canadian Embassy handout, more than 8 million U.S. jobs depend on trade with its northern neighbor. Measuring 5,525 miles in length (including 1,538 miles shared with Alaska), the U.S.-Canada border is the longest in the world.

It’s also one of the busiest, with more than 160 million crossings per year, from Blaine, Wash., to Calais, Maine. Last year, Canada’s two-way trade of goods and services with the United States came to $742.5 billion, according to the embassy. Canadian-owned companies in 17,000 locations across the United States employ more than 619,000 Americans.

Canada also buys more goods and services from the United States ($233 billion in 2012) than China, Japan and the United Kingdom combined. It’s also America’s largest supplier of foreign oil, as well as its top source of foreign tourists — more than 25 million a year.

Even more important, Canada represents the top export market for 38 states, with Michigan exporting $25.3 billion worth of goods to Canada in 2012 — more than any other state.

All of which makes replacing the 83-year-old Ambassador Bridge linking Detroit and Windsor an urgent priority, says Canada’s top diplomat in Washington.

“The bridge is too narrow for today’s needs and lacks adequate customs plazas. In addition, access to the bridge is located in downtown Windsor, which requires trucks to travel through residential streets and 16 traffic lights to reach the on-ramp,” Doer complained in an online posting last year to Michigan voters. “Any plans to expand the current bridge do not, therefore, solve the larger congestion and delay problems. With truck traffic conservatively predicted to increase 128 percent over the next 30 years, it is imperative that a solution be found.”

But like the Peace Bridge, the spat over the Ambassador Bridge — which saw more than $120 billion worth of trade cross over it in 2011 alone — has been rather undiplomatic.

Both Canadian Prime Minister Stephen Harper and the governor of Michigan, Rick Snyder, support the building of a publicly owned bridge, to be known as the New International Trade Crossing, to replace the aging suspension bridge.

So do the state governments of Indiana, Ohio and Kentucky, as well as the chambers of commerce of Michigan, Indiana and Ohio, not to mention auto manufacturers, building trades, steelworkers’ unions and farm organizations. 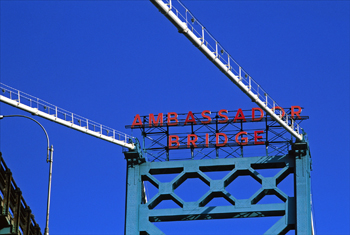 But efforts to replace the bridge have been perpetually stonewalled by Michigan billionaire Manuel Moroun, whose family has owned the Ambassador Bridge since 1979. Lawyers for Moroun indicated that his Detroit International Bridge Co. would file for emergency relief following an April announcement by Snyder and Canadian officials that they had received a U.S. presidential permit to build the $2.1 billion New International Trade Crossing.

Last year, voters rejected a proposal, pushed by Moroun, that would have delayed or blocked the new bridge — even though the tycoon reportedly spent $31 million on newspaper, TV and outdoor advertising in his campaign to keep out the competition.

According to Doer, the new bridge won’t cost Michigan taxpayers a dime.

“Michigan’s share of the bridge cost, estimated to be $550 million, will be paid by the government of Canada and recouped through bridge tolls. Any cost overruns or revenue shortfalls will be paid by Canada,” Doer said in his message to state residents. “The bridge will be built with U.S. and Canadian steel. The waiver to Buy America allows for Canadian steel to be used, but not steel from other countries.”

Furthermore, he promised, the new bridge will create 10,000 to 15,000 direct construction jobs in Michigan, whose unemployment rate is 8.7 percent, one of the highest in the nation. It would also give a badly needed boost to cash-strapped Detroit, which is in the process of declaring the biggest municipal bankruptcy in U.S. history.

That would still leave unanswered the question of what to call the new bridge. It could be named after a famous American or a prominent Canadian. But chances are it’ll be given a neutral, positive-sounding moniker, sort of like the Peace Bridge, in the interests of the kind of political correctness that was sorely lacking until just recently.

In any event, nobody seems in a rush to name it. Even under the rosiest scenario, it’ll be at least 2020 before the New International Trade Crossing carries any actual vehicle traffic — meaning officials won’t cross that bridge until they come to it.