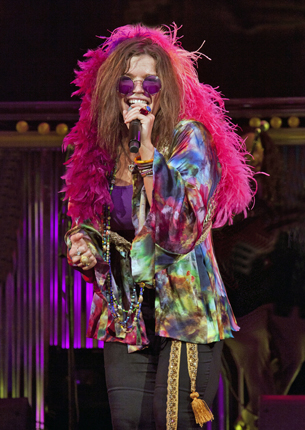 The 1960s was all about catharsis. The belief that letting it all out on a personal and political level will cure you; that experience — up close and personal without restraint — will cleanse you of evil. Compare that with today’s conservative culture where human interactions are once-removed by emails, text messages and instant messaging, and where social caution is considered common sense, not an affront to personal expression.

Playwright and director Randy Johnson must have intuited our collective need for a mix of ’60s idealism and rebellion when he created “One Night with Janis Joplin.”

Mary Bridget Davies gives a rousing tribute to 1960s rock icon Janis Joplin as she belts out hits such as “Piece of My Heart” in “One Night with Janis Joplin” at Arena Stage.

“Janis,” in a revival at Arena Stage this summer, is a well-done tribute to one of the artistic greats who lived and breathed the flower-power philosophy of the 1960s to the fullest and, rightly, shouldn’t be forgotten. The icon’s spirit comes alive in this explosive production, as does her music.

“In these days where fame is instant and true musicianship rare, the word ‘artist’ is an often misused statement,” Johnson wrote. “As we are held hostage to a manufactured pop culture on a daily basis, I feel we must constantly revisit our history and explore the authentic forces that have shaped the landscape of our lives.”

This nostalgic homage (more concert than plot-driven play) makes it painless to glide back to a simpler era of long-hair men (and women) with incredible guitar licks, purple haze, and gut-wrenching rock ‘n’ roll.

This effortless time travel wouldn’t be possible without the mega talent of Mary Bridget Davies, whose impersonation of the “queen of psychedelic soul” in looks, mannerisms and vocal styling is uncanny. Davies, who dressed like Janis Joplin for Halloween growing up in the 1980s, has solidified her career by portraying the singer since 2005 — starring as Joplin in the national tour of “Love, Janis.” She was also awarded Best Actress by the Cleveland Critics Circle Awards and nominated for Best Actress in a musical by Broadway World for “One Night with Janis Joplin,” and she is headed to Broadway in the fall with this current production.

Davies’s vocals are incredulously flawless, a feat that’s hard to pull off given Joplin’s signature pitch-perfect wailing and screaming. She treats the audience to a “concert,” showcasing many Joplin hits, including “Me and Bobby McGee,” “Cry Baby,” “Piece of My Heart,” “Down on Me,” and “Try (Just a Little Bit Harder).” Adding to Davies’s believability is her authentic 1960s garb — wide bell bottoms, flowing tops, brightly colored shades and, of course, the hippie bling of garish necklaces and wrist bangles.

The play’s premise is this: The audience in the theater becomes an audience at a Joplin concert, during which the artist shares snippets from her childhood, sources of her inspiration, and musings on life, love and performing. Those who are not familiar with Joplin’s back story will discover that she was from an upper middle-class Texan family, was a painter before a performer, and grew up singing along to Broadway records (her mother’s influence). 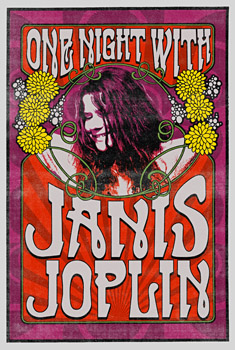 Most important, at an early age she latched onto and was influenced by female blues legendaries like Aretha Franklin, Etta James, Nina Simone and Bessie Smith. The result was a special blend that mixed rock, blues and Joplin’s Southern folksy roots, or “cosmic blues,” as she put it. This passion for blues comes to life with the portrayal of these famous vocalists by the talented Sabrina Elayne Carten, who also played the part of Joplin’s blues inspirations in the world premiere of “Janis” at the Portland Center Stage. Joplin was also heavily influenced by African American girl “doo-wop” groups like the Shirelles, portrayed here by capable singers Alison Cusano, Shay Saint-Victor and Kim Yarbrough.

The fact that Joplin was a young, white girl from Texas (she referred to herself as a “middle-class white chick”) and idolized African American artists at a time when civil rights was just taking center stage is just one of the ways in which Joplin was different from her peers. While being an oddity helped her career — she broke ground as one of the first female rockers to hit the music scene — it didn’t fare well for her personal life.

“No man has ever made me feel as good as an audience,” Joplin tells the crowd more than once throughout the evening.

More of Joplin’s personal life can be gleaned in Arena Stage’s lobby, which features framed reproductions of letters she wrote home from San Francisco, the spot she and others like Jimi Hendrix and the Grateful Dead migrated to follow their musical passions.

Along with Davies, the success of this production is truly an ensemble effort. The singers, the musicians (Joplin’s band), lighting, sound, wardrobe and hair all create an authentic concert high.

As Joplin says, the blues “can milk you with two notes.” The same can be said for this production.

One Night with Janis Joplin