If you are looking for an example of a contemporary global statesman, Gareth Evans of Australia is a compelling candidate. Evans served for more than two decades in Australia’s Parliament and held several important cabinet positions including a high consequential and widely heralded eight-year stint as foreign minister.

Evans left Australian politics and diplomacy and in 2000 became the president of the International Crisis Group. He led that respected organization for nearly a decade and while there, actively participated on a panel assembled by the Canadian government, the International Commission on Intervention and State Sovereignty. Evans helped pioneer the landmark concept, “The Responsibility to Protect,” which seeks to ensure that the international community acts to prevent mass atrocity crimes. The concept of R2P was developed in 2001 and was endorsed by the United Nations in 2005.

Evans has written or edited 14 books including an illuminating memoir, “Incorrigible Optimist: A Political Memoir” (2017). 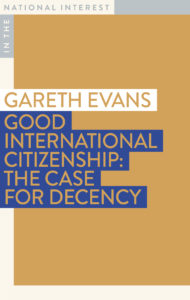 His most recent book is “Good International Citizenship: The Case for Decency” (2022). Evans makes a forceful and persuasive case that nations should conduct themselves honorably and cooperatively to tackle the daunting problems that confront the world. Exemplary behavior and active cooperation can improve the lives of millions and help rebuild the rules- based international order that has been critical over last seven decades and which is now under serious threat.

“For a state to be a good international citizen means, above all else, caring about other people’s suffering and doing everything reasonably possible to prevent and alleviate it,” Evans writes. “States that earn that description are those seen to be seriously committed to helping others, even when there is no direct or obvious security or economic benefit to themselves to be derived from doing so–in areas such as humanitarian relief and development assistance, human rights and environmental protection, arms control, peacemaking and peacekeeping. Being generally seen to be a good international citizen is a mantle hard won.”

Evans argues there are both moral and practical reasons for a country to be a good international citizen. The moral case is that nations and peoples are at their best when they seek to do the least harm and the most good—when they try to do the right thing because it is the right thing. The practical case is that good global citizenship enhances a nation’s reputation that produces tangible benefits such as trade, investment, and tourism.

Evans declares that “the returns from good, selfless international behavior are more than just warm inner glows: that such behavior can generate hard-headed, practical national advantage of the kind that appeals to realists—and political cynics—as well as idealists…In international diplomacy, as in life itself, the keys to being persuasive, and to working cooperatively and constructively, are being seen to be inherently decent.”

First, generous foreign assistance. He reminds us that the widely accepted goal for overseas development assistance as a proportion of gross national income is 0.7 per cent, or 70 cents out of every $100 a nation earns. Norway, Sweden, Denmark, and the United Kingdom regularly meet this goal and several other nations sometimes do. However, most countries do not.

The global response to COVID-19 has not been confidence inspiring, Evans says, citing the prevalence of national rivalry and recriminations rather than cooperation. Nor has the global response to climate change been encouraging. Decades of denial and tentative half steps have put the planet in peril.  “Climate change is not coming, it has arrived. Its causes are unequivocally human and its implications, not the least for Australia, are alarming. Achieving deep carbon cuts in the next ten years will be absolutely critical to holding any kind of line,” Evans writes.”

Evans is most compelling in discussing the “alarming degree of complacency, among publics and policymakers, when it comes to the risks of nuclear weapons.” The world has avoided nuclear Armageddon so far, but only barely and we cannot assume our luck will hold indefinitely. Referring to large nuclear arsenals still in place, he says there is “every prospect that, within the readily foreseeable future, those weapons will actually be used.” He adds: “The fact that we have not had a nuclear weapon used in conflict for over seventy-five years is not the result of statesmanship, system integrity and infallibility, or the inherent stability of nuclear deterrence. It has been sheer dumb luck.”

He believes that even non-nuclear weapons powers can be constructive in developing rules and norms pertaining to the doctrine, deployment, de-alerting, and reduction of nuclear arsenals.

“Good International Citizen” is powerful and persuasive. The benchmarks Evans uses and his plea for a “cooperative mindset” are applicable to middle powers but also major powers such as China and the United States.

This important book outlines practical steps to elevate national behavior and begin rebuilding our rules-based international order. There is no greater challenge facing leaders in the 21st century.