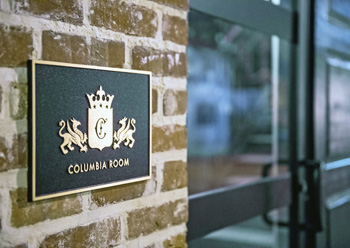 Washington has always been a drinking town.

Liquor lubricates the city’s sometimes stiff social scene, while wine flows freely at countless dinners and events. Alcohol of all varieties plays a starring role at official functions from Capitol Hill to Foggy Bottom to Embassy Row. In fact, Washington typically ranks at or near the top of national surveys of the heaviest drinking cities in America.

Columbia Room, located in the trending enclave known as Blagden Alley, sits just above the Dabney, one of Washington’s most celebrated new restaurants.

But in recent years, the nation’s capital has significantly refined its drinking culture with a slew of new craft cocktail bars that aim to simultaneously delight our palates and challenge our notions of what is possible behind a bar.

No one has done more to propel the trend in recent years than Derek Brown. Brown is proprietor of several of the city’s newest and most exciting eateries and cocktail bars, including Eat the Rich, Southern Efficiency and the now-defunct Passenger, a beloved craft cocktail space that emanated a funky, anyone-is-welcome vibe. Sadly, Passenger closed last year when Douglas Development announced plans to turn the building into an office complex.

But happily, Brown has resurrected one of Passenger’s most appealing features: a private drinking enclave called the Columbia Room near the rear of the old establishment. Brown recently reopened the rechristened Columbia Room in the suddenly sizzling hot Blagden Alley, just a few blocks from the site of the old Passenger near the Convention Center. The swank spot sits just above the Dabney, one of Washington’s most celebrated new restaurants.

While the new-and-improved Columbia Room retains the friendly, laid-back spirit of its former home, it has definitely grown up and taken on a more noticeable whiff of sophistication. The warm space includes a curved burl bar in the eponymous tasting room and tufted leather armchairs in the 22-seat Spirits Library. A gorgeous Italian mosaic is a design showstopper.

The cocktail bar offers standalone libations for about $12 apiece, or you can reserve a seasonal cocktail menu with three specialty drinks and accompanying small plates of food for $75. A champagne tasting menu is also available. Many of the Columbia Room’s bitters are made in-house and the menu offers an appealing selections of traditional cocktails and more modern-leaning creations.

We recently sat down with Brown over inventive libations at the Columbia Room to discuss his latest venture and to learn more about Washington’s transition into a more sophisticated drinking town. Brown said the now ubiquitous “cocktail bar” is actually a throwback to a simpler time. 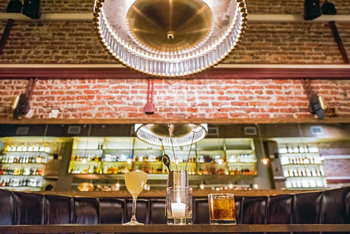 Quarter+Glory offers some two dozen concoctions, including the Illegal Negroni.

“I definitely think it’s more than a trend,” Brown said, noting that this cocktail culture “has always been part of the American culinary world. Part of the resurgence is the popularity of craft beer and wine, and a growing specificity [of preference] among those. The other part is this sort of growing awareness of American culinary tradition.

“Cocktails are American,” he continued. “There has become a recognition that we have this amazing cocktail culture, and it’s ours. If you go to Tokyo or Paris or Argentina, you can get cocktails and that’s part of what we did for the world.”

We asked Brown about the so-called “mixologist,” which to some comes across as a pretentious term used by self-important drink slingers. Brown acknowledged that the word has a legitimate origin — it comes from the 1856 Knickerbocker magazine cartoon — but he frowns on its use.

“The problem is it sort of became this abused word … and a lot of times over the past decade we’ve seen it become this kind of divisive thing,” he explained while conjuring an image of an imperious hipster mixologist with a ridiculous mustache and an insistence on serving a drink that you don’t want, that has 15 ingredients and will take 15 minutes to make.

If you want a run-of-the-mill vodka tonic or even a domestic beer, Brown and his Columbia Room crew will serve it to you.

“If somebody says, ‘I want a Jack and Coke,’ I’m going to make that for them and I’m not going to look at them sideways,” he said. “I won’t discourage them. In some cases, I might encourage them to try something different but that’s because I think we have a lot more to offer.”

And with that our second drink arrived: sherry, dry vermouth, yellow chartreuse, orange chartreuse, celery bitters and a few drops of kelp water. The cocktail was light and refreshing and absolutely unlike any we’d ever tasted. 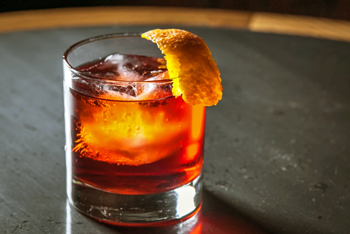 Brown said he envisions the Columbia Room as a place where people can experience high-quality liquors without guesswork and enjoy each other’s company in comfort.

“We just want people to come in and lose themselves, have a conversation or fall in love or conduct some business, whatever they want to do,” Brown said.

Oh, and if you’re a high-profile figure who prefers to keep a low profile when out for a night on the town, Brown assures us that the Columbia Room can keep a secret.

“We’re not the type of people who talk a lot about what happens here,” Brown said. “Discretion is number one. We’ll never call the paper the next day and say guess who was here.”

While Brown has been generating the most buzz on the local cocktail scene in recent months, his Columbia Room isn’t the only new player in the game. Among the city’s most recent craft cocktail arrivals is Quarter+Glory, which bills itself as a modern take on classic American watering holes.

Quarter+Glory, which opened in January near 14th and U Streets, NW, is the first D.C. venture by New York-based hospitality management company Public House Collective. The name comes from a supposed literary society in New York founded by playwright Eugene O’Neill that ended its meetings with the chant, “Give me a quarter and glory.”

Exposed brick walls and towering ceilings give the space a timeless feel, while the centerpiece is a 33-foot oak-topped bar. Quarter+Glory promises craft cocktails served on the fly during busy weekend hours and a more leisurely experience during the week. For now, the menu offers only drinks — about two dozen — but we’re told a food menu is on the way soon.

While we’ve noted Washington’s newest boozy palaces, it’s only fitting that we also mention the Gibson, one of the first establishments to launch D.C.’s cocktail boom and a harbinger of the Prohibition-era speakeasy craze. Opened in 2009, the Gibson also sits at 14th and U Streets — now arguably the most popular intersection in the city. On a recent visit we were reminded why we have always enjoyed this place so much. 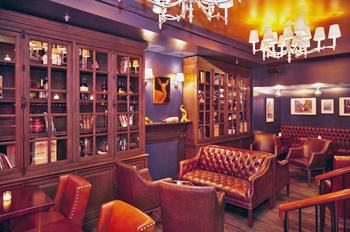 Dark and sexy, with several rooms and a small patio, the Gibson’s minimalist décor keeps the focus on your company and the glass in front of you. Gibson’s bartenders — or mixologists, if you prefer — obviously know their stuff. Asked our liquor preference, we mentioned bourbon and, voila, were promptly served a delicious, dark, smoky-sweet concoction that wasn’t on the menu but was unlike any we’ve ever had.

If you’re a vodka fan, the Gibson gang may try to steer you away from the old standby toward something similar but with a more distinct flavor profile. They might suggest the Automobile, featuring gin, lemon, raspberry, soda and egg white. Or maybe a Brunswick Sour — a delicious and intriguing combination of rum, lime and sugar with a heavy splash of red wine floating on top.

We also tested the Gibson’s traditional skills, ordering up a classic Martinez, one of the oldest drinks in the oeuvre. Old Tom gin, sweet vermouth and maraschino mixed with orange bitters and served up like a martini came on sweet and finished strong. Well done.

We also sampled some bites from the Gibson’s food menu, which is a bit more extensive than most craft cocktail bars. Those options come in handy because drinking more than one or two of these high-octane libations on an empty stomach isn’t a good idea.

If you haven’t eaten before you arrived, consider the Devils on Horseback, dark dates roasted a deep brown and wrapped in crisp, thick-cut bacon and served with a dollop of crème fraîche. The C.L.T. grilled cheese sandwich with dried coppa ham, marinated tomato, arugula, provolone and cheddar wasn’t the most substantial sandwich in town for $13, but it had an appealing flavor.

In a city that loves its liquor, it’s nice to have establishments that return the love. Here’s to drinking in style, Washington.