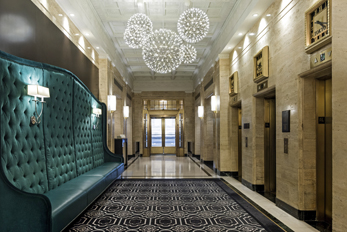 When King Willem-Alexander of the Netherlands has a birthday, everyone gets to party. The country marks the day — April 27 — with several large events in the Washington, D.C., area that double as National Day celebrations.

The Sofitel in D.C. is located a stone’s throw from the White House and has its own event planning service.

“This year we will have three events on that day,” said Ilse van Overveld, public diplomacy, press and culture counselor at the Netherlands Embassy. “We will start with an official reception for our American counterparts, then a smaller reception for Dutch residents or Dutch people living in the metro area that we will invite to come over to the embassy and celebrate our National Day. That reception will evolve into a dance party.”

The DC Dutch club organizes the dance party, hiring a DJ, and “of course we will bring Heineken,” van Overveld said, which is essentially the event’s official beverage.

National Day, or King’s Day, events are traditionally held on the embassy grounds. The courtyard can hold about 500 guests, and an auditorium and reception hall indoors keep the festivities going. The guest list includes ambassadors, officials from the U.S. Departments of Commerce, State and Treasury in addition to representatives from nongovernmental organizations, think tanks and the cultural field. The theme of the party is orange and green — orange being the country’s national color and green being, well, the color of a Heineken beer bottle.

On the menu are traditionally Dutch dishes such as herring and chopped onions and bitterballen, a snack of minced meat formed into balls and dipped into bread crumbs before being fried. “We like that with mustard,” van Overveld said. “Most of our American colleagues are not too fond of our herring, I have to admit.”

Although the receptions are geared toward the adult crowd, children don’t get short shrift. The embassy works with the Dutch School in Bethesda, Md., to recreate scenes that take place nationwide on National Day in the Netherlands.

“Traditionally in the Netherlands we organize flea markets so kids — and their parents as well — can go into their house and find stuff they don’t really use any more and they’d like to sell,” van Overveld said. “The kids are on small blankets or in the streets of any city in the Netherlands, and we will do that at the Dutch School in Bethesda” on April 30.

That event will also include games and musical performances. Children keep the money from items they sell. “We are known for our entrepreneurial spirit. I guess we teach them early how to go about it during our National Day,” van Overveld said.

Years ago, the embassy held National Day events at the ambassador’s residence, but they grew too large for the space. It uses its own grounds for its National Day — rather than a hotel, as many other embassies do.

By definition, a National Day is the date on which a country commemorates its founding, but really it’s a chance for any country to celebrate and share its culture through food, drink, entertainment and general merriment. But many embassies don’t necessarily have the space or means to host celebrations on-site — and as a result, they frequently turn to hotels. 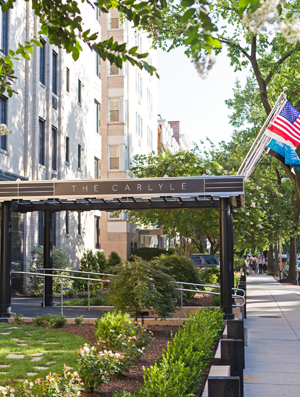 While National Day receptions are often a point of pride for embassies, they are also, as one U.S. government official told us, a dime a dozen in a city filled with premier events. Recognizing that the reception-hosting business is a competitive market, embassies have stepped up their game to make the experience more unique. To mark the 25th anniversary of the end of the Gulf War, for instance, the Kuwaiti Embassy recently held a commemoration and screening at the Newseum to mark the liberation of Kuwait. The unusual venue played host to VIPs such as former Secretary of State Colin Powell and recently appointed Saudi Ambassador Prince Abdullah bin Faisal bin Turki bin Abdullah Al Saud. The Embassy of the United Arab Emirates, for its National Day, held a lavish reception at the National Air and Space Museum, in part to tout the country’s own space program.

“The trend from the last couple of years is that a lot of the embassies tend to want to do it in their own residence or their own space,” said Alexandra Byrne, the general manager of the Sofitel Washington DC Lafayette Square. “The space has been a little more eclectic than it’s been in the past. In the past, the hotel was a go-to place. Now I think embassies are getting a little more creative.”

And hotels, in turn, are getting creative to attract National Day business back. Popular choices in the past include standbys such as the Willard InterContinental Washington and local Ritz-Carlton properties, but other options are emerging as fresh approaches to traditional festivities.

Sofitel has had experience with National Day celebrations. It worked recently with the Embassy of Chad, for example.

“We were able to do some research and find some specific recipes that would be special for the country that people were coming from, and we were able to cook those dishes according to the specs that they had given us as well. It was very successful that way,” said Byrne, who herself is somewhat of a novelty in the hospitality industry. Byrne was recently chosen to be the first female general manager of the Sofitel in D.C., making her the only currently serving female GM of a luxury hotel in the nation’s capital.

She’s got her sights set on attracting more diplomatic events through various means. For one, security is no issue. “We work very closely with the Secret Service. We understand their needs, what is specific about the group — arrival times, security, making sure we communicate the staff members’ names and all those good things to [ensure] security around the visit,” Byrne said.

Then there’s the 237-room building itself. Situated a stone’s throw from the White House, it’s a prime luxury location. Event space is plentiful, with floor-to-ceiling windows in the ballroom and a separate entrance on H Street, enabling guests to bypass the main hotel entrance. The ballroom can hold up to 300 people for a reception or 140 for a sit-down meal.

What’s more, the French-owned brand has its own event planning service called Sofitel Inspired Events, which promises “meticulous attention to detail and creative vision that extends beyond the details,” according to the hotel’s website.

“A lot of the francophone countries really enjoy staying here … but we do have ambassadors in the hotel — we call our employees the ambassadors. We have them from all over the world and they can speak various languages, so we are able to cater to a lot of the embassies around the city as well,” Byrne said.

But what really makes Sofitel attractive, she said, is the service. “What we’re well-known for in Washington is the service,” Byrne said. “Really at the end of the day, clients come to a hotel to get that service, that hospitality — the fact that you feel welcome, that you feel at home. We are able to provide all that and the customers know that.”

With a full renovation costing $10.5 million completed in 2014, the 198-suite Embassy Suites Hotel at the Chevy Chase Pavilion on Military Road, NW, is ready to show off its new look to embassies.

“In our renovation, we did all hardwood floorings, all new furnishings, so we went for a very downtown boutique hotel style with an all-suite property,” said Jeff Brainard, area general manager for Destination Hotels. Other changes include a bigger lobby and the addition of a new bar and restaurant, the Atrio Café.

“That area is more than 7,000 square feet under one of D.C.’s largest glass atriums, so it’s a very unique, open space that can accommodate over 400 people very easily,” Brainard said of the café. “That’s where we like to host the larger events.”

Besides having access to the café chef, the hotel also has an agreement with Range, a restaurant owned by local celebrity chef Bryan Voltaggio.

Additionally, the hotel has about 6,000 square feet of meeting space divided into five rooms. 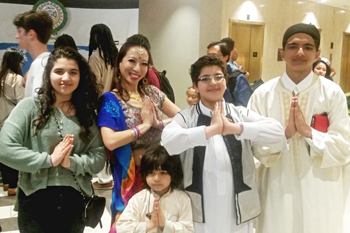 Second from left, Wuiping Yap of the Asia Heritage Foundation poses with friends at last year’s Passport DC, whose Around the World Embassy Tour was partially held at the Embassy Row Hotel.

The hotel’s sister property, the Embassy Row Hotel on Massachusetts Avenue, NW, has worked in the past with the embassies of Kuwait, South Africa and Great Britain.

“Last year was our first year hosting these programs,” Brainard said of the Embassy Row location. “We completely renovated that property, putting in over $17 million. Last year we hosted both daytime and evening events for multiple embassies. We had over 1,500 people throughout the hotel between our Station Kitchen & Cocktails [a coffeehouse and restaurant] and our meeting space.”

The largest space there is the Admiral’s Ballroom, which is 2,265 square feet. A rooftop space adds another 6,000 square feet and an outdoor bar lends another 1,000, Brainard said. And all are up for grabs when it comes to embassy events.

“The entire property is very flexible,” Brainard said. Last year, “we did a combination of hors d’oeuvres and then an appetizer upstairs and then more of an international station buffet in the main ballroom, with drinks and bars set up throughout the lobby and the restaurant.”

At either hotel, the defining feature is service, Brainard added. “One thing that’s been lost in hospitality in my opinion is the ability to listen. And when you’re talking to the different embassies, these events are about celebrating culture, and when you’re celebrating culture, you want to get the finer points of what’s important,” he said. “For these events, it’s a dynamic event. It’s of national significance and pride to the group we’re working with. We have to commit ourselves as a property and not just as a banquet team. It’s not a catering event. It’s not a big group. This is a national event that the entire property needs to participate in celebrating. So we are as much a participant as we are a host.”

The brand itself is the biggest draw for embassies looking to put a funky, fresh spin on their National Day events, said Ursula McNamara, director of sales and marketing for the hotels. Kimpton takes a modern approach to travel, offering at-home amenities such as free coffee and tea in the morning, wine in the evening, yoga mats and bicycles. Plus, pets of all sizes are welcome.

In terms of catering, the Carlyle covers it through the highly rated Riggsby restaurant, where chef Michael Schlow makes American cuisine with a European influence. “We’ll be able to cater the menu and customize it to … what the embassy is trying to celebrate,” McNamara noted.

The hotel has 2,700 square feet of meeting space that can hold 100 people for a reception or 70 to 80 for a seated, plated meal. The Glover Park property, which is undergoing a multimillion-dollar renovation, will have a ballroom that will measure about 1,800 square feet, and it will also have a restaurant space.

“One big thing is we have a multicultural staff that includes team members who can speak German, Spanish, French, Turkish, Amharic, Korean — and that’s just to name a few — and it creates a personalized experience,” she said. “It’s nice when guests arrive at the hotel to be able to welcome them in their native language.”