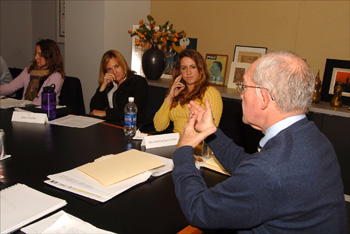 Veteran Diplomat Teaches Students How to Run an Embassy

As U.S. forces pull out of Iraq, Shiite insurgents step up their murderous attacks on the withdrawing soldiers — egged on by the mullahs ruling Iran. At the same time, a tiny oil-rich emirate seizes a boatful of weapons in the Persian Gulf, and a water truck belonging to the U.S. Embassy blows up — while al-Qaeda issues a decree urging the overthrow of that emirate’s royal family for cooperating with the United States.

Ambassador Edward “Skip” Gnehm Jr. quickly assembles his country team around a big conference table. He knows he only has a few hours to craft a top-secret cable to his superiors at the State Department, detailing how Washington should respond to the unfolding crisis.

Yet in this case, the conference table is located not halfway around the world — in some unstable Middle East sheikhdom — but on the fifth floor of George Washington University’s Elliott School of International Affairs, only blocks away from Foggy Bottom. And Gnehm’s “country team” isn’t a select group of seasoned diplomats, but rather 12 determined GWU students who dream of becoming diplomats themselves someday.

“The Role of an Embassy in the Conduct of Foreign Policy,” now in its fifth year, is perhaps the only course of its kind in the nation. Developed and taught by Gnehm, whose official title is Kuwait Professor of Gulf and Arabian Peninsula Affairs, the class meets for five two-hour sessions in a room decorated with brass Arabic coffee pots and posters from Israel and the Gaza Strip.

“The Elliott School has a unique approach to education, in that we try to combine the academics who teach theory, history and geography with professors of practice like myself,” Gnehm told The Washington Diplomat between classes. “We come out of a background of having worked in the field, so we can make it real for the students.”

His name may look somewhat Arabic, but Gnehm — who speaks the language fluently, having learned it at American University in Cairo — isn’t Arab at all. Born and raised in Carrollton, Ga., Gnehm attended GWU in the 1960s, earning bachelor’s and master’s degrees in international relations.

Gnehm joined the Foreign Service in January 1969 (his first assignment was Saigon) and over the next three and a half decades racked up an impressive list of overseas postings, including Lebanon, Syria, Tunisia, Yemen and Saudi Arabia. He also served as U.S. ambassador to Kuwait, Australia and Jordan, as well as director-general of the Foreign Service and deputy permanent representative to the United Nations under Secretary of State Madeleine Albright.

Drawing on his experience, Gnehm generally creates a scenario for his students involving crises in Jordan or Kuwait — two countries he knows well.

“The reason I pick a country is that you need some context for a crisis,” explained the 65-year-old professor. “I couldn’t possibly do this if we didn’t have some boundaries.”

In this particular crisis, he said, “there’s been a huge upsurge in attacks on U.S. convoys as we’re withdrawing from Iraq, with loss of life and evidence that Iran is involved. Washington has made the decision to react to that militarily. We then get instructions to go to the host government and ask for certain things in support of what’s happening. That’s the scenario.”

Each student is assigned a specific role on his country team — i.e., political officer, defense attaché, regional security officer — based on a random drawing from an envelope. Gnehm then feeds information to the students via e-mail throughout the five-week duration of the class, though not all the students get the same information or at the same time. 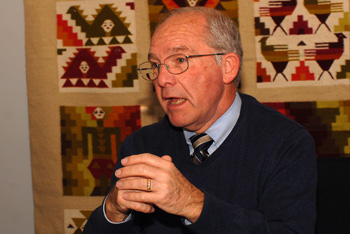 Ambassador Edward “Skip” Gnehm Jr. replicates diplomatic crises for his course on “The Role of an Embassy in the Conduct of Foreign Policy” at the George Washington University’s Elliott School
of International Affairs.

In this case, Gnehm’s 12 country team members had a month to put their cable together, when in practice this usually happens in a matter of hours or days.

Erin Tyler, a second-year graduate student from Norwalk, Ohio, played the role of chief of the U.S. Embassy’s management section.

“My job was to make sure the embassy functioned properly. I was literally in charge of keeping the lights on and paying the drivers,” she said. “In our scenario, I was provided some information, but other people had information I wasn’t aware of. For example, I came to class knowing that a water truck had blown up. Nobody else knew that.”

Tyler, 28, spent two years in the Peace Corps as an English teacher in Armenia. The part-time student — she also works in the Elliott School’s admissions office — says she’d love to join the Foreign Service someday.

“I figured that Ambassador Gnehm’s class would be a good opportunity to get a perspective on what it would actually be like to work at an embassy,” she said. “There was nothing theoretical about the advice he gave us. He taught us that you don’t always have all the answers. You just have to make your best recommendations.”

Throughout the fictional Gulf crisis, Andrew Houk, 29, was chief officer of military cooperation. An international affairs grad student with a concentration in Middle East studies, Houk spent this past summer in Syria learning Arabic. The Canton, Ohio, native says Gnehm’s class will undoubtedly help him prepare for the Foreign Service oral exam.

“I thought it was a very useful course,” Houk said. “He tried to recreate the confusion that might exist in a real scenario. We were expected to follow actual current events, and he brought in actual diplomats to speak to us.” Houk said he was drawn to Gnehm because of “his reputation for being an excellent professor, and because of his qualifications in the Middle East, my immediate area of interest.”

Gnehm, who was ambassador to Kuwait from 1991 to 1994 and U.S. envoy to Jordan from 2001 to 2004, said that speaking the language of the country you’re serving in is extremely important — as is knowing how to make friends.

“In a crisis situation, the ambassador would go to see the most senior official in a country, the emir or the king, or at the very least the foreign minister,” said Gnehm, who has a carved wooden nameplate in English and Arabic on his desk, a memento from a long-ago trip to Egypt. Dealing with the media is also crucial, and in that context it’s important to familiarize yourself with the leading journalists in a specific country.

“You already know which editors will be easy to catch, and the ones who will write an ugly op-ed piece, no matter how long you talk to them,” he explained. “You have to build up relationships. It’s hard for a Middle Eastern head of state to ‘diss’ an American ambassador. But if that ambassador is not effective in terms of building relationships, then they’ll be more reluctant to call him in.”

Gnehm adds that U.S. envoys must be skilled at developing personal relationships so that “you don’t have to wait for an appointment when there’s a crisis.” On the other hand, he cautions, “an ambassador could have a terrific personality, but the embassy could be in shambles because he’s too busy enjoying his friendships.”

“Every now and then, you run into an obnoxious ambassador,” acknowledged the veteran diplomat, who’s not afraid to name names but requests that whatever confidential information he reveals in his classroom stays in the classroom.

Asked by one student whether career diplomats make better ambassadors than political appointees, Gnehm — who spent 36 years in the Foreign Service — thought for a minute.

“I’m not one who would ever tell you that career diplomats are better than political appointees, because one of my jobs was selecting ambassadors, and we have as many problems with career diplomats as we do with political ones,” he finally answered. “I’ve had a lot of political appointees who are extraordinarily good, with access to the president and who know how to promote business. I could go on and on with examples.”

Gnehm also teaches a course in the spring focusing on how ambassadors interact with U.S. agencies abroad.

“In that course, I do a similar exercise in which I organize the class as inspectors, going out under my orders to interview ambassadors about their experiences with other agencies. Since we can’t send the students abroad, I make arrangements with 16 former ambassadors now here in Washington.

They go in groups of three and four, pretending they’re inspectors, and ask the ambassadors to describe the experiences they had in dealing with the CIA, the DEA [Drug Enforcement Administration] and other agencies. Then each of them writes a memorandum of their conversations.”

Seasoned diplomats who have guest-lectured at Gnehm’s classes include Beth Jones, former ambassador to Kazakhstan; Thomas R. Pickering, who served as U.S. envoy to Russia, India, Israel, El Salvador, Nigeria, Jordan and the United Nations; and Langhorne A. “Tony” Motley, former ambassador to Brazil and assistant secretary of state for inter-American affairs.

Gnehm hopes these distinguished colleagues will serve as examples to his students.

“It’s critically important for the United States for young people with integrity and responsibility to go into [the Foreign Service],” said the GWU professor. “There’s a desperate need for young people to serve our country abroad. The challenges are enormous, but an individual does have the ability to make a difference.”

“Skip Gnehm is a real, laid-back, down-to-earth kind of guy compared to other ambassadors I’ve met, and I can see how that style really helps in a crisis,” Turnbull told The Diplomat in a phone interview. “His class is very realistic.”

Turnbull, whose class used Jordan for its hypothetical crisis, noted that “having sat in on several country team meetings, I can say that the way he handled the class really reflects what I’ve seen in the field.” He added — in what must be the ultimate compliment for a diplomat-turned-professor — that “if the ambassador ever went back into the Foreign Service, he’d be an absolute pleasure to work for.”