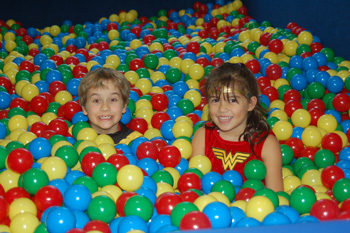 Newton Raises Bar for Children Let Down by Traditional Schools

At this time last year, Allison Abraham became convinced that her son was in the wrong school.

Great Falls Elementary in Virginia’s Fairfax County is a fine institution, she says. But her second-grader, who struggles with attention problems, was simply not reaping its benefits, overwhelmed in a class of 25 other students.

“It was like a revolving door with parents and specialists coming in and out,” she recalled. “The feedback from teachers was that he wasn’t able to do something I knew he was able to do, creating this gap. I was afraid the gap would only grow.”

After looking around the entire Washington region for a school that would engage her son socially in a more intimate setting, Abraham soon realized there was no such place.

So she began a determined, yet fast-paced process of creating her own specialized school.

Lawyers, realtors and education experts came together over the next eight months to help the former businesswoman secure nonprofit status, develop curriculums, hire teachers and finally find a location.

The result is the Newton School, which began offering instruction this fall at its Sterling, Va., campus. Small classes are the hallmark, with no more than four children to every teacher. The focus is on aiding children who previously struggled to reach their potential in a traditional setting.

Abraham is quick to point out this does not mean that all the students have been diagnosed with an attention disorder or learning disability. In fact, of the 20 kindergarten through fourth-graders enrolled this year, there’s an even mix of pupils with medically identified ailments and those who are just behind socially but have not been diagnosed with any conditions.

The one common factor is that the children must be at, or nearly at, grade level so they can keep up on the academic side. 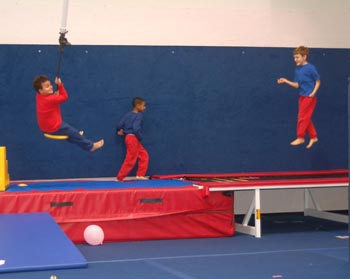 As part of the Newton School emphasis on movement to keep children engaged, students take turns teetering across low and high balance beams, climbing over elevated mats and bouncing off trampolines to complete a staff-designed obstacle course that changes daily.

“It’s a very broad strategy for kids who haven’t done well in the public school system. Public schools are very good at teaching academics and catering to the average or gifted student but not so much at facilitating games and conversations, keeping kids feeling great about themselves,” Newton’s co-creator explained. “That’s what we do. Some kids have Asperger’s syndrome, some a language delay. Some have trouble reading but are fabulous hockey players.… It was really important for us to have a wide variety of kids helping each other succeed.”

Each morning starts off with a burst of activity. Students take turns teetering across low and high balance beams, climbing over elevated mats and bouncing off trampolines to complete a staff-designed obstacle course that changes daily.

This high level of movement is a striking feature at the school.

Unlike typical classrooms, where students remain fixed at a desk for hours on end, Newton students won’t sit still for more than 30 minutes at a time, according to Sonja Lopez, who co-founded the school with Abraham. And because the facility was a former fitness center, the gym is a dominant feature, with a foam pit, rings, trampoline and a tumble track spread out over 6,000 square feet.

Much of the day is spent navigating the equipment while simultaneously keeping the learning going.

On a recent morning, a group of students lined up to swing on a rope from one circular mat to a plush red and blue cushion. But before they were allowed to take their turn, they had to read off a carefully selected word from a note card held up by one of the instructors. After they swung to the other side, each student moved a Styrofoam ball on a wooden display to show how many of the required 10 turns they had taken.

“We’re teaching them how to let go, which is not a natural process,” Lopez said specifically about the rope swing, noting that the words they must read or multiplication table or whatever problem they must solve come directly from the classroom teachers. “Whatever they’re working on academically, the teachers bring us the data and we incorporate it into the gym and into the circuit. The students end up learning even when they don’t realize that they are.

Also unique to an elementary school are the elective activities. Students take taekwondo, swim, have frequent music classes, and will soon receive instruction in yoga. According to Abraham, the idea is to constantly keep everyone engaged, interested, moving and motivated. 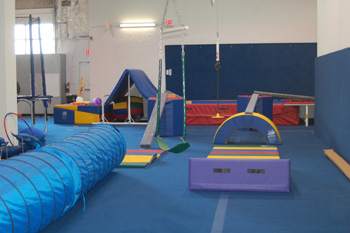 The facility for the Newton School was a former fitness center — hence the gym is a dominant feature, with a foam pit, rings, trampoline and a tumble track spread out over 6,000 square feet.

Field trips happen often, even if they are not always grand in scale. For instance, rather than just explaining to classes how the postal service works in theory, classes go through the motions of writing letters and then visiting their local post office to get a behind-the-scenes tour. They also vote on their class pet and then head to a nearby pet store to understand how someone uses money to purchase the animal of their choice.

Newton parent Diana Sullivan says the interactive approach has worked miracles on her 6-year-old fraternal twins. Her daughter had been attending a private school in McLean, Va., where she was well above her peers academically yet unable to control her abundant energy enough to fully concentrate and stay focused. On the other hand, Sullivan’s son struggled to fit in socially.

The impact that the Newton School’s programs have had on both children, even mere months into the school year, has been immense, according to Sullivan. “They’re starting to talk a lot, holding conversations, coming out of their shells,” she said. “The school gives them that security, and when I send my kids there I am so at peace.”

Sullivan most appreciates the care that Abraham and Lopez took to assemble a diverse group of students who interact well together. In addition to submitting an application to attend the school, families have to bring their children in for a trial run so that administrators can gauge their personalities while they play with other children.

“They took the time to figure out which kids fit together as a group,” Sullivan said. “It’s definitely been noticeable. Even the way my kids walk and hold their body — they stand up straighter. It’s rounded them out.”