Home The Washington Diplomat January 2010 Despite Focus on Renewables,Fossil Fuels Not Going Anywhere 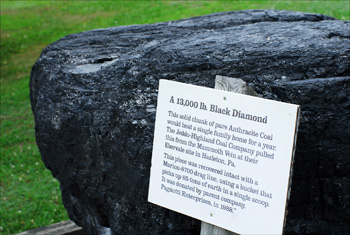 Like it or not, the fossil fuels that powered America’s rise to prominence — oil, natural gas and coal — will keep this country running for a long time, despite solid evidence that all of them contribute to global warming.

Expensive PR and lobbying campaigns, funded by record profits, will also ensure things stay that way, say supporters of the many “green” alternatives that were showcased at December’s U.N. climate change conference in Copenhagen.

The American Petroleum Institute (API) is the oil and gas industry’s leading national trade association, representing some 10,000 U.S. companies that provide equipment, services, supplies and engineering support for oil exploration, drilling and refining operations. The API is currently fighting efforts by Congress to slash the emission of greenhouse gases that are believed to cause temperatures to rise and Arctic ice to melt, thereby raising sea levels.

This solid chunk of pure anthracite coal weighing 13,000 pounds is on display outside the Anthracite Heritage Museum in Scranton, Pennsylvania. The U.S. coal industry is lobbying hard against pending legislation to reduce greenhouse-gas emissions.

An API-funded analysis of the American Clean Energy and Security Act, which narrowly passed the House of Representatives in June, shows that oil refining capacity will shift overseas if that bill — and the Senate’s version of it — becomes law.

“This study clearly shows the devastating impact this legislation could have on U.S. jobs and U.S. energy security,” said the organization’s president and chief executive officer, Jack Gerard, speaking about the House legislation (also known as the Waxman-Markey bill).

The API study claims refining activity could drop by as much as 25 percent (4.4 million barrels a day), while investment could fall by up to billion (a drop of 88 percent) by 2030 if a version of Waxman-Markey becomes law.

For now, oil companies are not exactly suffering — especially when it comes to the money they have available for lobbying efforts.

Combined, the three largest U.S. oil companies — Exxon Mobil, Chevron and ConocoPhillips — spent about million on lobbying in the first quarter of 2009, up from .4 million in the last quarter of 2008.

“They’re under attack, they’re ramping up their operations and they’ve got money to spend,” said Tyson Slocum, director of the energy program at Public Citizen, a Washington-based watchdog group, in recent comments to the Associated Press. “They’re in much better position than other industries to draw upon financial resources for their lobbying effort.”

“The reality is that coal is abundant, efficient and less expensive than most other energy options and will remain an important part of our energy future,” according to Foster Wheeler Inc., a global engineering and construction firm that does big business with utilities. “Coal accounts for about 50 percent of electricity production in the United States and remains the lowest-cost energy source for U.S. residences.”

Robert Murray is chairman, president and chief executive officer of Murray Energy Corp., the largest independent coal producer in the United States. He calls the Waxman-Markey bill and similar efforts in the Senate “a misguided attempt to address climate change” that will cost U.S. citizens trillion over the next eight years, with little or no environmental benefit.

“The most abundant, and by far the least expensive energy source, in this country for generating electricity is coal, rivaling the energy potential of Saudi Arabian oil,” he argues. “Unfortunately, this proposed climate change legislation forces America to throw away this tremendous resource — and our low-cost electricity with it.”

Murray said such legislation sets what he calls “an unattainable cap on carbon dioxide emissions by 2020, with the first reductions due by 2012” — thereby forcing utilities to switch from lower-cost coal to natural gas or other more expensive energy sources.

Likewise, the chief executive of one of the nation’s leading utilities recently testified before Congress that “the 25 states that depend on coal for more than 50 percent of their electricity will have to shut down and replace the majority of their fossil fuel plants as a result of the climate change legislation.”

Whether such dire predictions are merely scare tactics remains to be seen. But it’s clear that not only lobbying efforts that will keep the United States addicted to fossil fuels for the foreseeable future.

For one thing, alternative sources like solar energy and wind power just aren’t that lucrative as long as oil and natural gas remain relatively affordable. And nuclear power plants — while they don’t contribute to global warming — carry their own obvious safety risks, not to mention the enormous capital expenditures required to build them.

In 2008, when oil prices reached a record 7 a barrel, the wind industry was booming and 8,900 megawatts of wind energy capacity was installed in North America. This represents 40 percent of all total new capacity. Yet interest in wind energy has declined along with oil prices.

Earlier this summer, a grandiose plan by conservative Texas oilman T. Boone Pickens to invest billion in a Texas wind farm fell apart after he pulled out of the project, citing lower fuel prices and “the collapse of the capital markets.”

Pickens’ plan was to build the world’s largest wind-energy project, which was to have powered up to 1.3 million homes. It was part of his vision to slash oil imports by 30 percent over the next decade by replacing oil with natural gas in cars and trucks; wind power, in turn, would replace natural gas as a source of electricity. But after spending million promoting the project, he couldn’t get a loan to finance it — and eventually gave up in favor of smaller wind sites scattered around the Midwest.

Debate over just how much oil is left on Earth and when the world will hit its “oil peak” rages on, but regardless, most experts agree that the use of fossil fuels will only rise unless a drastic change in thinking is adopted.

The most recent World Energy Outlook released by the Paris-based International Energy Agency (IEA) confirmed that energy use will grow dramatically over the next two decades, especially in the developing world. Yet ominously, despite the recent push toward renewable energy, the IEA predicts that three-quarters of this increased demand will be for fossil fuels like oil and coal.

Specifically, global oil demand, after suffering two years of setbacks in the economic meltdown, will resume growth and increase 24 percent from 85 million barrels a day to 105 million barrels a day in 2030. Electricity demand, meanwhile, will grow even faster — by 76 percent by 2030 — and global coal consumption will grow 53 percent by 2030. The report assumes that gas, coal and oil prices would rise along with that demand.

The IEA blatantly called the current energy path is “unsustainable,” saying it would result in “catastrophic consequences” from global warming.

“While the details of a binding agreement may not be completely worked out in Copenhagen, it is more important than ever that participants send a strong, indicative and ambitious signal that can guide energy investment and policy decisions globally,” said Nobuo Tanaka, IEA executive director.

Assuming talks at Copenhagen fail and government policy remains the same, the IEA report says that demand for fuel is predicted to rise 40 percent on 2007 levels between now and 2030 — and that global temperatures could rise by up to six degrees Celsius. Limiting the temperature rise to the scientifically recommended two degrees Celsius, the report admits, would require a “low-carbon energy revolution.”