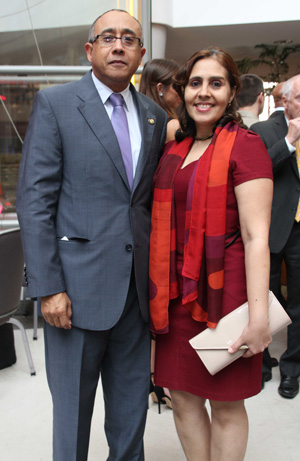 Cuba is famous for its cigars, sugar and rum, but perhaps its most valuable export is its doctors. While many goods are lacking on the communist island, from cars to computers, its free national health care system is highly rated and over the last 50 years, it has dispatched tens of thousands of doctors to treat the poor all over the world.

“Cuba has a program for doctors to work outside the country and many Cuban doctors go to many African countries,” said Rocha, an anesthesiologist. “As someone who is originally from Cuba and worked in Africa as a medical doctor, I’m proud of the African woman I have become, standing in my role here and promoting my country, Cabo Verde.”

In fact, Rocha is the founder of the African Cultural Exchange Group within THIS for Diplomats, a nonprofit volunteer group that welcomes and assists diplomats and their families during their stays in Washington, D.C. “We are like a bridge for linking Africa with other cultures represented here in Washington,” she said.

In her earlier life in Cuba, Rocha was married and had a son. “The father of my son left the country looking for a better life and l became one of many Cuban women who bring up their children alone, being mother and father, with the help of my family. We were three generations of women at home — my grandmother, my mother and me — because my father was living in another Cuban city, a normal Cuban reality,” she explained.

Rocha, too, eventually left the tightly controlled island. Although Cuba has one of the most cost-effective health care systems in the world, its doctors make paltry pay (salaries average roughly $25 a month) and often have to take on second jobs. So while she has fond memories of Cuba and loves to return for the holidays, Rocha also remembers how difficult it was and why she left for a physician’s post in Cabo Verde.

“The Cuban government took 30, 40 even 50 percent of our pay [as a foreign doctor], but it was still better than staying in Cuba. I went because I had to do it. I was dying in Cuba. It was during the ‘special period’ when we had no food, no money, no clothes,” she said, referring to an extended period of economic hardship following the collapse of Havana’s key ally, the Soviet Union.

Cabo Verde, originally settled by the Portuguese in 1462, was the first European outpost in the tropics. Comprised of 10 volcanic islands and five inlets, this archipelago is located some 350 miles off the coast of West Africa and is known for its Creole Portuguese-African culture. The strategically located string of islands, which once served the slave trade, is poor in natural resources but has won a reputation for political and economic stability.

Today, more people with Cabo Verdean heritage live outside the country than the half-million who have remained on the islands. The diaspora includes more than 500,000 in the United States alone, with the biggest concentration in Providence, Rhode Island, and more than 500,000 in Europe.

“They are very active. When we have elections, they vote absentee,” said Rocha, noting that Cabo Verde adopted a new constitution in 1992 that created a multiparty system. Today, it is considered one of the most stable democracies in Africa.

Her husband is a 32-year veteran of diplomacy, serving in top posts such as director of political affairs and cooperation at the Ministry of Foreign Affairs and secretary of state prior to coming to Washington in 2014.

Rocha said she and her husband still travel between both island nations. “We live and work in Cabo Verde, we are Cabo Verdean citizens and we go to Cuba on vacation. It’s two days of travel either from Cabo Verde to Portugal, then onto Cuba, or Cabo Verde to Providence [Rhode Island] and then Cuba,” she explained.

“I went to Cabo Verde because I am a doctor. I am proud to be Cuban. But the countries aren’t so different: The food, the dances, the beaches and the sun are much the same,” she reflected. “They both have some heavy food but people eat lots of fruits and fresh vegetables — only what’s in season.”

She is also learning about American cuisine. This past Thanksgiving, she taught herself how to cook a turkey and how to serve it with cranberry sauce, not the tomato sauce that is used in Cuba.

Before coming to Washington with her husband in mid-2014, she was somewhat familiar with the United States. “I learned from American TV and films. I knew a lot but I decided that it would be better to learn here firsthand. People outside idolize the American lifestyle.” 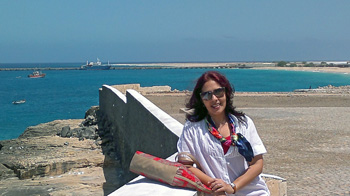 Dr. Yamile Luque Tamayo Saco Rocha is an anesthesiologist who left her native Cuba to practice medicine in Cabo Verde.

Rocha admits that she occasionally indulges in the ultimate form of capitalist worship: shopping. “I’ve discovered Macy’s, Bloomingdale’s, Lord & Taylor, Chico’s, Swarovski. I’ve learned about sales; there are no sales at home. Some people buy here and sell there, taking shoes and handbags — Calvin Klein and Ralph Lauren — even second-hand, to sell at home,” Rocha said, noting that she often wears a traditional “pano di terra” hand-woven scarf from Cabo Verde around Washington. “I found this is a way to show people here something representative of my country. I incorporate it in my fashion style, using it like a scarf draped from my shoulder.”

Besides shopping, Rocha said she enjoys joining her friends at Zumba class or at the pool. Otherwise, she likes to write, especially poems and prose. “I think I will write a book. I wrote a little book when my son was born about his first two years. I also like to read, in Spanish and in English. My favorite authors are Isabel Allende, Paulo Coelho and Gabriel García Márquez.

“When I was a child, I was always reading. I loved books and got them for Christmas, the end of the year, the end of school and my birthday. Wherever I go, I take my books with me. My husband gets books on politics and U.S. presidents like Lincoln and Washington. I read his books too.”

Rocha said she also likes art, pointing to a framed painting by Cabo Verdean artist Kiki Lima on their living room wall. “He is very famous now and also the brother-in-law of my husband.”

While in Washington, she would also like to encourage Americans to learn more about Cuba, especially now that diplomatic relations — and travel restrictions — with Havana have eased. “I want to help Americans travel to Cuba,” she told us. “I want to have good relations with them. They must be more open.”