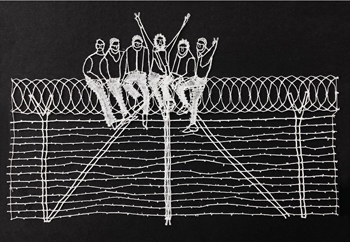 The exhibition title, just two words, hints at something much bigger — the largest exodus of people in recorded history, in fact.

The words speak to a universal desire to uproot your life in search of a better one, especially if your prior life has become a physical manifestation of hell, whether in the form of a rubble-strewn city in Syria or a barren village in Sudan. It is a journey driven by the natural impetus to flee, from war, poverty or persecution — and the inevitable backlash among those who fear outside encroachment on their comfortable existence.

“Escape Routes” is a timely, tight exhibition at the Goethe-Institut that looks at the current wave of global migration through four drawings and 16 lace works by Martin Keil, a visiting artist at the University of Rhode Island, and his mother Rotraut Keil, a German textile designer.

“Escape Routes” is a timely exhibition at the Goethe-Institut that looks at the current wave of global migration through intricate lace works.

Tackling the enormity of this kind of subject matter within the confines of a relatively small exhibition may seem impossible. But taken together, the limited number of works in “Escape Routes” contains more than meets the eye. The digital drawings and pictures made with great care and patience from lace convey a powerful narrative about mutual interdependence and rapid change.

The issue that the art confronts is daunting: The United Nations recently estimated that the number of people displaced by conflict exceeds 65 million. Some are trying to escape the Islamic State in Iraq, while others are fleeing an authoritarian regime in Eritrea or drug gangs in El Salvador.

The bulk of these people have been displaced within their own countries, but it is the millions pouring across national borders who are grabbing headlines, and ratcheting up xenophobic rhetoric in places ranging from Alabama to Austria.

The recent surge in migration has been fueled in part by Syria’s unrelenting civil war. Ever since that nation imploded and a plethora of warring groups — too many to distinguish or extinguish —emerged to fill the vacuum, hundreds of thousands have died and millions more have been on the move, escaping the collapse of their once-ordinary, once-relatively prosperous lives.

They have crossed borders on land and dared the dangerous trek along the Mediterranean Sea, pouring into an increasingly unwelcoming Europe and testing the will and humanity of the European Union. In the process, their suffering, the fears they engendered and their sheer numbers have morphed into both a humanitarian and political crisis. Stories of children drowning and individual portraits of pain and desperation have inspired sympathy and generosity. But they also compete with stories of disease and crime spreading in encampments, the threat of terrorism and the erosion of national identity, all of which have become the fodder of the nightly news and the weapons of demagoguery in Europe and the United States.

Never mind that the majority of Syria’s refugees have streamed into neighboring countries such as Turkey and Lebanon, not Europe or the U.S. In fact, the U.N. found that over 85 percent of the world’s refugees settled into low- and middle-income countries such as Jordan and Ethiopia — i.e. those least equipped to handle the influx.

But that hasn’t stopped EU member states from erecting barriers to stem the tide of migrants seeking shelter on its shores, or U.S. politicians from debating the merits of admitting a paltry 10,000 vetted Syrian refugees. Fears of unchecked immigration prompted Britain to leave the EU and catapulted a billionaire mogul to become the Republican frontrunner in America’s presidential election.

But you will not see such specific references in “Escape Routes,” whether they be Syrians, Mexicans or migrants in general. The drawings and pictures are not horrific. They are, in fact, clear as glass and sharp as a needle.

The titles offer a few specifics: “Hungarian Border;” “Through the Balkans”; “Human Trafficker”; “Boat People”; “Refugee Camp Slum.” The words seem like a predicament, a state of being — a simple description that belies a striking complexity.

In fact, what happens when the drawings upon which they are based become lace is astonishing. The lace pictures have been created from drawings that were stylistically edited for effective transfer into lace. The faces, clearer in the drawings, become somehow more haunting in the passage to lace. You can see the meticulous effort that goes into this transformation, with one loop after another joining to form the outline of a gun, dark figures in a truck, thin girls about to be used, a mother clutching a baby or an imposing barbed-wire fence.

Interlinking knots that twist and turn serve as a metaphor for the mass movement of people seeking a better life, and the quandaries this exodus has created. The world as lace is delicate and fragile — the works seem like they might disappear if a blast of wind comes through the door — yet also tactile, thin and strong, as if they have been imprinted into memory.

The works themselves in a way bypass artistic language. Their fragility as well as their power beg the question: What will happen to these images — and the people in them — in the coming months or years? Will they begin to recede or multiply? Will they stitch together a community of nations with a renewed sense of solidarity and urgency, or unravel our globalized world at the seams?