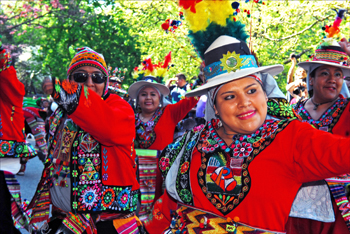 It’s that time of year again when 30,000 people in the Washington area put on their most comfortable walking shoes and stroll around the world without leaving the District, thanks to Cultural Tourism DC’s annual Passport DC celebration.

Passport DC offers Washingtonians a window into a world of cultures, from Bolivia.

Events happen throughout this month, including the Embassy Chef Challenge (May 25) and Fiesta Asia Street Fair (May 21). But the most popular are the Around the World Embassy Tour (May 7) and Short Cut to Europe: European Union Embassies’ Open House (May 14) — when a good chunk of the city’s 180 embassies opens their doors to the public free of charge.

The two open house showcases have become an eagerly anticipated, citywide attraction, drawing in thousands to partake in everything from traditional folk dances and henna demonstrations to children’s face-painting and, of course, food — lots of food. Embassies participating in Passport DC span the globe, from Azerbaijan, Costa Rica and Gabon to Japan, Mexico and Pakistan, not to mention the 28 member states of the EU.

Coordinating with these 70 or so embassies and managing hundreds of volunteers are daunting tasks that seemingly require large teams of experienced professionals to pull off. But Cultural Tourism DC handles Passport DC with a full-time staff of just three people and one part-timer — plus a lot of help from its friends, including Destination DC and Events DC. 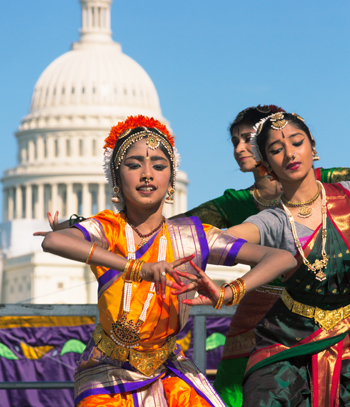 Young performers from Embassy of India

“Because we’re in our ninth year, we don’t have to envision it abstractly,” said Steven Shulman, executive director of Cultural Tourism DC, an independent nonprofit coalition of more than 230 organizations that works to showcase the city’s culture and heritage. “We know how it should unfold and where we need help and what we need to do and when we need to do it to make sure we can accommodate the participants and the volunteers, so it does get somewhat easier by having that checklist of things to do.”

Planning for the month-long series of events starts almost as soon as the previous one ends, with debriefings in June. The organization then takes a breather to focus on other programs before returning its focus to Passport DC at year’s end.

“Our hot and heavy stuff probably really starts in December,” Shulman said. “We do the recruitment of embassies in February because lots of ambassadors are away from the city in December, January. Before we can get any traction, it’s usually late February. We’ll push for a month to have embassies register. At the same time, we’ll look to our affiliates to let us know about programming that might be interesting to an international audience or has an international bent to it.” 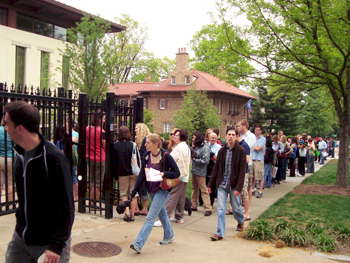 Before it reduced its staff size in recent years, Cultural Tourism DC had about 15 full-time workers, all of whom focused on Passport DC. Today, the nonprofit outsources tasks such as communications and marketing and logistical assistance on event days.

“Like many nonprofit organizations, we’ve gone through a transition,” Shulman said. “That’s probably the biggest change in the past couple years from a logistics standpoint. I’m learning how to manage from a distance by email and little techniques that we’ve picked up about how best to inform people and manage them and get the feedback we need to make decisions.”

He relies heavily on technology to help get the job done now. For example, using web-based customer relations management software, Shulman can be in touch with the 300 people who volunteered to help with the embassy tour. Those helpers signed up through VolunteerHub and will get their job assignments via a ticketing reservation program.

“It’s those kinds of tools that make it possible for us to do a pretty efficient job with far fewer people,” he said.

Jan Du Plain, the embassy liaison for Passport DC, still does plenty of in-person recruitment, though. It’s her job to bring embassies on board for the event. 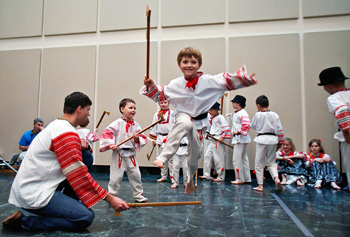 “I know their time is limited so I look at it as how can we best serve you in the time that you have to help bring awareness to your country, to your projects,” Du Plain said. “I’m always thinking — not to sound too patronizing — of their interests. We would not have this program if not for the embassies, and that requires understanding their needs and spending time trying to learn more about what they want.”

The idea, she said, is to support what embassies are doing, not add to their workload.

She also works with the embassies on ideas for presentations that would appeal to visitors. For instance, the Embassy of Nicaragua is having a centennial celebration of a beloved poet. Additionally, she encourages embassy officials to think beyond the building to keep visitors engaged while they’re waiting in line to get in. As a result, guests can expect to see demonstrations of martial arts at the Korean Cultural Center, for example. 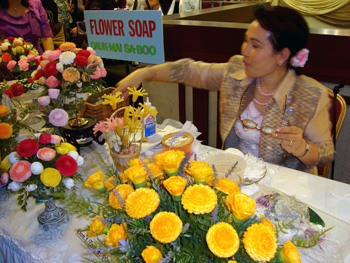 A soap-carver was one of the featured activities at the Embassy of Thailand during Passport DC’s first year in 2009.

Although Shulman draws on Passport DC’s past to prepare for future events, he recognizes the need to change things, too.

This year, Cultural Tourism DC is adding a third embassy tour hub at the Washington National Cathedral. It will join the traditional hubs at Dupont Circle and the University of the District of Columbia — kickoff points for the tours and a spot to pick up information and buy souvenir passports.

Despite Shulman’s best efforts, there is always one thing he can’t control: the weather. “It’s so much better when it’s a nice day,” he said. “People want to be out in it…. The ultimate goal is to work with the weather man or weather woman.”

For more information on Passport DC, which runs May 1 to 31, visit www.culturaltourismdc.org.

For past coverage of Passport DC, see “New Cultural Tourism Chief Ready to Take Flight with Passport DC” in the May 2013 issue of The Washington Diplomat and “Passport DC Still Opening Doors – And Not Just to Embassies” in the May 2012 issue.