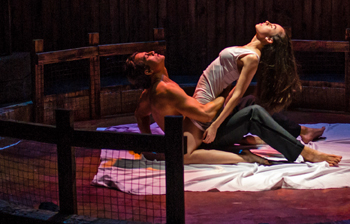 GALA Hispanic Theatre, now in its 40th year of serving D.C.’s Latino community, made a brilliant decision when choosing to produce an adaptation of Gabriel García Márquez’s acclaimed novella “Chronicle of a Death Foretold.” The story’s transition from prose on page to spoken script is seamless and one could argue that the infamous tale of murder in 1950s Colombia is even more compelling in play form.

At left, Erick Sotomayor portrays a rich husband who discovers on his wedding night that his bride, Inés Domínguez del Corral, isn’t a virgin.

The book is based on the true story of how one small town’s unbendable moral codes led to the graphic and vengeful murder of Santiago Nasar for taking the virginity of Angela Vicario. Angela’s fall from grace is discovered by her rich husband, Bayardo San Roman, on their wedding night. The dishonored bride, who was forced to marry against her will, names Santiago as the culprit while being beaten and interrogated by her family. Santiago’s murder — the unquestioned result of Angela’s infidelity — is considered an “honor killing” by her twin brothers Pedro and Pablo, who stab Santiago to death with butcher knives.

Because the narrative reads almost like a poem — it is nonlinear, repetitive and highly symbolic — it becomes more formidable when heard out loud.

This production — brilliantly adapted by Jorge Alí Triana and directed by José Zayas — smartly takes advantage of the story’s heightened dramatics. GALA often delivers dialogue -— performed in Spanish, with English surtitles — in a steady stream of emotionally high-pitched punctuations. While this improbable staccato is sometimes overly theatrical, it is a perfect fit for Márquez’s intensely vivid storytelling. After all, the author is famous for magical realism, which is not without its artistic affectations.

The story illustrates how societal pressures and mass mentality affect people’s actions. The large cast — including standout performances from Nicolás Carrá as Santiago and Inés Domínguez del Corral as Angela — works well together, as if in a group dance, to act out the horrific event.

That the murder was inevitable, no matter how many people could have thwarted it, is ever apparent as a chorus of onlookers in the town not only witnesses the act, but seems to conspire against stopping it through their inaction.

“There’s no way out of this. It’s as if it had already happened,” Pablo says as Pedro hesitates to follow through on the killing.

“On the day they were going to kill him, Santiago Nasar got up at five-thirty in the morning to wait for the boat the bishop was coming on” — that’s the helpless refrain recounted over and again throughout the play by the characters, who can only report the murder, not prevent it. When delivered by the chorus of townspeople, the effect is even more haunting than when spoken by the novella’s single narrator.

“Don’t worry children; they already killed him,” the townspeople chant in almost celebratory euphoria after Santiago is slain. 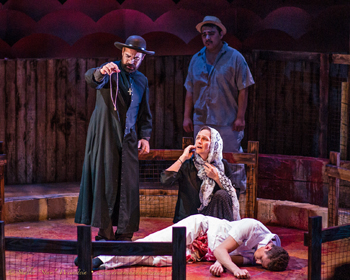 As retribution, her brothers murder the man who supposedly defiled her (Nicolás Carrá, seen above) in Gabriel García Márquez’s “Chronicle of a Death Foretold.”

Scenic designer Elizabeth Jenkins McFadden expertly translates the play’s theme and tone into visual representations, making it clear that this small, unassuming Colombian town runs on barbaric ritual and honor at all costs. What looks like a bull ring takes center stage — the place where Santiago is eventually slaughtered for all the town to see — much like the public, ritualistic skewering of a bull by a matador. An excess of knives swings down from the ceiling, a constant reminder of this society’s accepted brutality; a cow’s carcass hangs, waiting for its butchering; wired enclosures frame the stage, where fresh meat is chopped; and what looks like a river of red blood flanks the backstage wall.

William D’Eugenio, composition and sound designer, has the luxury of adding sound to an otherwise silent novel. A hauntingly beautiful, lyrical guitar accompanies the wedding night seduction between Bayardo and Angela, and it abruptly ends at orgasm. Ominous, repetitive drumbeats anticipate the murder, and consistent and angry dog barking tensely punctuates the uneasy air.

What makes Márquez so special is his gall to relay a gruesome tale without fear, partiality or judgment.

He tells of a clearly sexist society where women are portrayed either as virgin saints or whores. Angela was married against her will to Bayardo. Her mother often said of her daughters, “They’re perfect. Any man will be happy with them because they’ve been raised to suffer.” The male characters, however, also suffer. Santiago is brutally murdered, the twins are imprisoned for their deed and Bayardo is denied his young wife.

This sense of helplessness is ever paramount in the uncertainty over whether Santiago was truly the culprit, or if Angela just shouted out any name to stop her forceful interrogation. When someone asks her, “Do you know Santiago Nasar?” she replies, “He’s my author,” which led some critics to assume the story’s narrator is the guilty party. Regardless, someone had to be punished to preserve the family’s honor, and it almost didn’t matter who it was.

GALA manages — by using careful, excruciating finesse in acting and production — to perfectly capture the essence of this age-old tale. Although the world lost Gabriel García Márquez in 2014, his message lives on.

So does GALA’s mission to expose Washington audiences to Latino arts and culture. The group is hosting a Noche de Estrellas gala on May 10 at the Organization of American States to celebrate 40 years of artistic achievement and to honor Dolores Huerta and other outstanding Latino community and arts leaders.