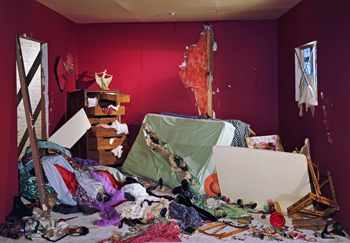 Jeff Wall’s “The Destroyed Room” is among 90 works by more than 40 international artists in “Damage Control: Art and Destruction Since 1950.”

For most people, art is creation, but an unorthodox exhibition at the Hirshhorn Museum presents art as exactly the opposite.

“Damage Control: Art and Destruction Since 1950” delves into destruction and reminds us of its important place in the world of contemporary art. Featuring approximately 90 works by more than 40 international artists, the exhibition includes paintings, sculpture, drawings, printmaking, photography, film, video, installation and performance art.

The exhibition occupies most of the Hirshhorn’s second-floor gallery and begins with the biggest bang of all — a nuclear explosion.

In the 1950s, Harold Edgerton, along with his colleagues Kenneth Germeshausen and Herbert Grier, produced the film “Photography of Nuclear Detonations,” which captured a number of test explosions at the behest of the U.S. Atomic Energy Commission. One of their films, a 16-minute nuclear testing film, depicts a hydrogen bomb detonated in all its fury over the parched desert of southern New Mexico. The roiling intensity of the nuclear inferno and the velocity of the smoke rising to form a dreaded mushroom cloud wasn’t intended as art, but projected here on a wide screen in the Hirshhorn, it is nothing short of mesmerizing.

The nuclear imagery is a bracing introduction to an exhibition that explores artistic chaos in many different — if not always so apocalyptic — forms. 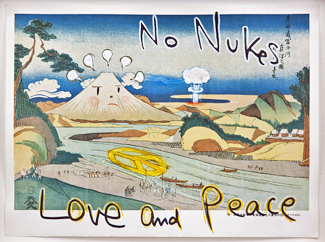 Yoshitomo Nara’s “No Nukes (in the floating world)”

“I felt there was a need to create a thematic exhibition dealing with the numerous artists who since around 1950 have harnessed the powers of destruction as a counterattack on the destructive forces in a world close to the apocalypse,” said Hirshhorn interim director and chief curator Kerry Brougher in a press release announcing the exhibition.

Brougher curated the exhibition with Russell Ferguson, an art professor at UCLA, who said he “had become interested in exploring the way artists, from the mid-’60s on, had begun to re-engage with destruction as a vehicle for self-expression, iconoclasm and rebellion.”

Moving into the next gallery and away from nuclear explosions, Swiss artist Jean Tinguely’s “The Sorceress” strikes a much more whimsical note. Tinguely employs a metallic jumble of hangers, springs, washers and other household items to create “The Sorceress,” which appears to be little more than a scrap heap until plugged in. Then, it transforms into a jangling, throbbing life form. The image is not unlike a wild-haired woman playing guitar — fun and possibly a bit feral. 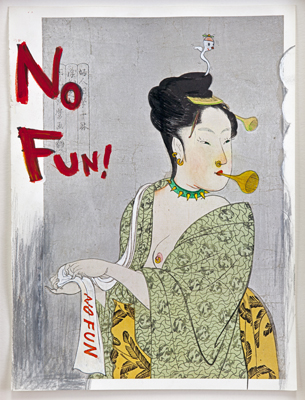 Nara’s “No Fun! (in the floating world)”

Raphael Montañez Ortiz’s “Archaeological Find #3” at first glance appears to be a wood installation, a tree opened up to reveal the organic complexity inside. But upon closer inspection, it becomes clear that this is actually a burned mattress. The browns and beiges of the decayed cotton batting inside form a surprisingly eye-pleasing palette as the mattress’s rusting metal springs jut forth in random sequences.

Meanwhile, Thomas Demand’s “Landing” leaves nothing to the imagination, except perhaps the question of how this could happen. The large-scale photograph depicts Demand’s meticulous recreation of a mishap that occurred in January 2006 at the Fitzwilliam Museum in Cambridge when a visitor fell down a staircase and destroyed three 18th-century oriental vases, smashing them into hundreds of pieces. Demand meticulously recreated the scene of the crime, so to speak, based on photographs, and he manages to find a modicum of beauty in the horror. The soft light, coupled with the jade-colored fragments, is almost soothing.

Douglas Gordon’s series of vandalized photos of pop music stars, titled “Self Portrait of You+Me,” depicts portraits of such musical luminaries as Marvin Gaye, the Bee Gees, Cher and Kurt Cobain in various stages of distress. A classic photo of the Gibb brothers posing back to back in all-white leisure suits is seriously sullied by what looks like blood and burn holes splattered across the frame. Gaye’s typically serene visage morphs into something sinister under Gordon’s treatment, which includes cutting out the famed soul singer’s eyes and mouth.

Pipilotti Rist’s 1997 video installation “Ever is Over All” is arresting not only for its staccato bursts of violence, but for the pretty sheen that Rist’s actress injects into the proceedings. In the short slow-motion film, a young woman walks along a city street, smashing the windows of parked cars with a large hammer in the shape of a tropical flower. The woman’s pleasant green dress and high-heeled shoes create a marked contrast to the aggressive damage she inflicts on the parked cars.

Toward the end of this interesting, if somewhat disjointed, exhibition, the allusions to destruction get intensely violent. In what is perhaps the most difficult piece in the show, Christian Marclay’s video “Guitar Drag,” a Fender Stratocaster guitar is affixed by a chain to the back of an automobile. The guitar — plugged in, amplified and screeching — is dragged down dirt roads and along asphalt thoroughfares. The imagery intends to invoke the horror of James Byrd Jr., a black man who was chained behind a pickup truck by white supremacists and pulled along to his death in 1998.

“Damage Control” isn’t always easy to look at, and sometimes it seems to veer in too many directions. But the exhibition does an admirable job of helping us see destruction as a force that is almost as important as creation in contemporary art.

Damage Control: Art and Destruction Since 1950