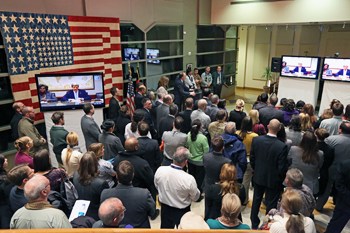 Sitting in a D.C. coffee shop in mid-November, Michael notes with a hint of irony that even though it took him three years to pass the written and oral components of the test that determines who becomes a U.S. Foreign Service Officer, he’s still not sure if — or when — he can expect to serve in a U.S. embassy abroad.

And he’s not alone. Many erstwhile U.S. diplomats are currently stuck in employment limbo, having passed the necessary tests needed to join the Foreign Service but also facing a department that isn’t hiring nearly as aggressively as in years past.

Much like the rest of the U.S. government, the State Department has been a victim of across-the-board budget cuts known as sequestration. In 2013, the cuts amounted to $400 million, forcing the department to ratchet down on hiring, leaving candidates like Michael, who asked that his real name not be used, to languish on a register of Foreign Service candidates without any clear hint as to when they might move off the list.

U.S. Secretary of State John Kerry holds a digital videoconference with American diplomats and military personnel at the U.S. Embassy in Kabul, Afghanistan, last year. In the 2013 fiscal year that just ended, the State Department hired 291 Foreign Service generalists, down 47 percent from the year prior and 150 percent from 2010.

According to figures posted on a State Department message board, the hiring decreases have been substantial: In the 2013 fiscal year that just ended, the State Department hired 291 Foreign Service generalists, down 47 percent from the year prior and 150 percent from 2010. Hiring among Foreign Service specialists — who focus on administrative, management and technical matters at embassies abroad — has also fallen, dropping from 502 in 2010 to 299 in 2013.

“Due to sequestration, the department has implemented a hiring slowdown, hiring one employee for every two that departs. This applies to Foreign Service, civil service and locally employed staff. A few special areas have been exempted primarily for the protection of life and property or where staffing is supported by fees charged for services,” explained the State Department through its press office.

In a February 2013 letter to Sen. Barbara Mikulski (D-Md.), Secretary of State John Kerry warned about the impact of the cuts on American diplomacy, which seems to be making a comeback of sorts with the recent Iranian nuclear breakthrough. “Cuts of this magnitude would seriously impair our ability to execute our vital missions of national security, diplomacy and development,” he wrote.

That’s where Michael finds himself. After three prior attempts, in early 2013 he passed the written portion of the Foreign Service exam, and in September he surpassed the oral portion. (In between the written and oral exams, there’s also an essay, and if that doesn’t pass muster, candidates don’t move on to the oral.) With slowly building fluency in a critical language — which adds points to his final score — Michael felt confident that he could quickly make his way into a new class of diplomats-in-training.

That hope is currently on hold as he joins more than 600 other candidates on the register of applicants who have passed the Foreign Service exam but are waiting for a formal job offer from the State Department.

The hiring freeze isn’t the only challenge he faces, though. The department hasn’t stopped advertising Foreign Service jobs or cut down on the number of annual tests, so even as current candidates may not move off of the register at all, new ones who take the test can be added to it — and, depending on their score, they could place ahead of people who have been patiently waiting for a job.

Michael also worries that his already slim chances are being threatened by Foreign Service assignments provided noncompetitively through initiatives like the Mustang Program, which allows civil servants or Foreign Service specialists to join the traditional diplomatic corps. Military veterans also automatically get a bump in their score, so classes tend to have a sizable military representation.

Despite diplomacy often taking a backseat to defense in terms of prestige, plenty of people want to join the Foreign Service. According to the State Department, some 20,000 people take the Foreign Service exam every year. Despite the fierce competition for a coveted spot, the department hasn’t significantly raised the bar needed to pass the written and oral tests, creating a glut of “successful” candidates who may never get jobs in the present hiring climate.

The wait may feel like it’s lasting forever, but it won’t: Candidates who pass the Foreign Service exam can only spend 18 months on the register before having to start the process all over. Many, like Michael, do so even before their time is up, taking the test every year to ensure that they can extend their stay on the register. Still, it’s a gamble. Candidates can only choose one score, and if they fare poorly on a more recent test, they have to choose between a higher placement that might expire more quickly or a lower placement that would keep them on the register longer.

In the meantime, candidates face another dilemma: jeopardizing their current jobs in the hopes of securing a future one working in U.S. foreign policy. That’s because the hiring process requires intensive screening and background checks. Investigators have to interview a candidate’s current employer, so there’s no way to keep your boss in the dark about the fact that you hope to eventually leave your job. Other candidates come from all over the world to take the oral exam (at their own expense) and even when a “conditional offer of employment” is made, there is no guarantee that will translate into an actual job. On message boards, some successful candidates have complained of waiting years to get hired, including one nine-year odyssey.

In fact, even as State deals with budget cuts, it may be draining taxpayer money by continuing to administer the Foreign Service exam at the same pace as in years past. That’s because of the rigorous vetting process and extensive medical evaluation, which includes chest X-rays and full blood panels. Yet despite the backlog of approved candidates waiting in the wings, the State Department continues to offer the test three times a year, performing (and paying for) hundreds of medical checks on people who may never be brought on board.

Whether the hiring situation will improve — or possibly get worse in the coming year — is a concern for Robert Silverman, president of the American Foreign Service Association (AFSA).

“Our core concern is about the people. The State Department is largely a function of the hiring of people serving overseas in the Foreign Service. That’s how we get things done. What we’re concerned about, our message to Congress and to the public, is that we need to support our people overseas and the budget environment currently will see a drop in our ability to be effective overseas,” he said.

Silverman has taken his message to Congress, and he says that many legislators  — the same ones who rely on Foreign Service Officers for assistance when they travel abroad — are sympathetic to the department’s woes. They also recognize that a changing global landscape requires an adequately staffed diplomatic corps.

“In the Middle East, where we’re winding down from two wars, our military presence in Afghanistan and in Iraq has declined, and will decline further. But our diplomatic presence will not. It needs to continue if not increase because all the democratic changes going on in that part of the world, the upheaval makes it more important to engage with a broader spectrum of the public overseas. The people who do that are the Foreign Service. Our mission is not declining, but the budget is affecting our ability to be effective,” said Silverman, who spent 18 years working in U.S. embassies abroad.

The omnibus budget deal that passed in January should give officials a better sense of whether the hiring slowdown will become more permanent. The bill allocated $49 billion for State and Foreign Operations for fiscal 2014, a $4.3 billion cut from last year. Diplomatic security saw an increase in funding but other areas, including USAID and foreign assistance, took a hit.

In the meantime, Michael tries to stay positive and assumes that it’s only a matter of time before he joins the ranks of diplomats posted abroad. “I’m going to be a Foreign Service Officer. It’s just a matter of when,” he says.

Sam, another hopeful Foreign Service Officer (FSO) who asked not to be identified by his real name, is less hopeful. He says that his current place on the register expires in April, and while he plans on taking the test again this month, he’s not expecting much from Congress by way of additional funds or flexibility for the department.

“I’m fairly certain I will time-off the registry. The current political climate is so toxic it is hard to believe otherwise,” he said. “That somewhat typifies the FSO wannabe’s life — reading the governmental tea leaves hoping to not get my hopes up too much.”