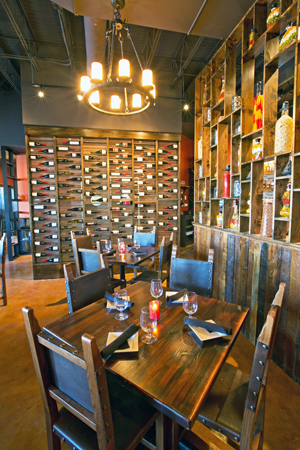 Darna Restaurant and Lounge in Northern Virginia ranges throughout the Middle East for its culinary inspiration.

Arlington does not divulge its culinary secrets easily. Who would have thought there would be an elegant Lebanese-inspired restaurant between a Jiffy Lube and an urgent care clinic with a nice view of the gas station across the street? But there it is, tucked away on a small street between Wilson Boulevard and North Fairfax Drive — a Mideast oasis in Northern Virginia.

Darna Restaurant and Lounge is the brainchild of three partners, Mohammed Abu-el-Hawa, Johnny Kattan and Ahmad Ayyad. The intrepid trio saw potential in the spot — a boxy brick building originally built as a metal fabrication shop that had recently been vacated by Costa Verde Restaurant — and decided to take a chance on the rather odd location to open Darna Lounge in early 2012, followed by Darna Restaurant this spring.

Darna is the team’s first venture, but not their first experience in the industry. Kattan, no stranger to the lounge scene in the D.C. area, helped to establish Darna as one of the top hookah lounges in the area. Abu-el-Hawa grew up working in the kitchen at his family’s business, the venerable Adams Morgan institution Mama Ayesha’s, and his experience shows in his passion for Darna.

The partners chose celebrity designer Yvette Irene to interpret their vision for the venture and together they have created two visually striking and sharply contrasting spaces inside the building’s stark wood-and-orange brick façade.

Darna takes its name from the Arabic phrase for “our home,” and the concept is expressed very differently on the two floors. To get to the lounge, you climb a set of dark, uninspiring stairs that open out to a large, airy space broken into distinct areas set apart by design elements and seating that suggest a library, living room, bedroom and kitchen. But that is where the homey analogy ends. The place is sleek, with striking touches such as canopy-type drapery around the “beds” and a crackle glass bar lit from underneath with blue light for an almost aquatic effect. Even the bathrooms have been punched up a notch with red glass tile walls.

Early in the evening, the feeling in the lounge is relaxed as patrons sip drinks and quietly puff on their hookahs, filling the air with sweet, fruity tobacco smoke. But as the evening passes, the vibe changes. Whether a DJ or live band, the music gets louder and the crowd more frenetic as the dancing starts and the crush at the door builds. Weekends are usually packed upstairs, and reservations are essential to get a table.

Meanwhile, just a few steps away downstairs, the restaurant is worlds apart from the lounge. Here, the domestic moniker seems more fitting. As eye-catching as the lounge is, the restaurant is solid and sedate in soothing earth tones. Stacked stone walls reminiscent of Eastern Mediterranean architecture surround dark wooden tables, leather chairs and booths that are both functional and comfortable. The decorative walls are also graced with glass bottles of brightly colored pickled vegetables that divide the space, and everything is softly lit with simple wrought-iron chandeliers.

Chef Michel Dawaliby’s carefully constructed dishes stand out against this subtle backdrop. Ranging throughout the Middle East for his inspiration, Dawaliby draws not only on his native Lebanese cuisine, but also on Palestinian, Jordanian, Egyptian, Saudi Arabian and other influences in creating dishes that emphasize freshness and simplicity.

He has developed two different menus for the lounge and restaurant, which offer complete meals or snacks with some overlap. Both menus offer a substantial list of familiar hot, cold, rolled and fried mezze, all of which have been consistently good in several visits and some exceptional. The sujok — garlicky beef sausages served in a light tomato sauce — are slightly spicy and very flavorful. For the cheese roll, slim and crispy phyllo rolls of feta and mozzarella are offset with a selection of colorful fresh vegetables. And the zahir — fried cauliflower with cumin and tahini sauce — is appealing in its lack of complexity. 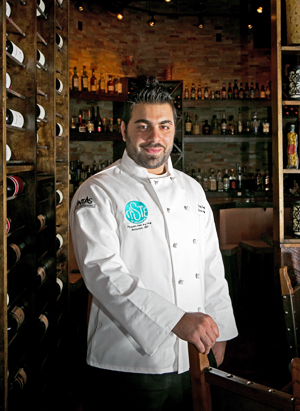 Chef Michel Dawaliby draws not only on his native Lebanese cuisine, but also on Palestinian, Jordanian, Egyptian, Saudi Arabian and other influences in creating dishes that emphasize freshness and simplicity.

Dawaliby included some less familiar mezze as well, including the Jarjeer salad — a combination of fresh mushrooms, baby arugula, walnuts, parmesan cheese, olives and lemon — and the foul modammas, a blend of fava beans, garlic and cumin.

Overall, however, guests will find few surprises among the mezze. But the main dishes, while traditional to the region, are much less common in this area and are nothing short of an adventure. The Molokhia, a classic dish in Lebanon and throughout the Middle East and North Africa, is made of chunks of boneless chicken breast served in a thin stew of mallow leaves and garlic. Mallow, a spinach-like member of the jute family (and a distant cousin of the hibiscus that is blooming so beautifully right now) can often be slimy like okra — but the texture is just right under Dawaliby’s ministrations. Again, the dish is simple in its preparation, but not in taste.

Mansaf, the national dish of Jordan, consists of lamb shank cooked in fermented yogurt and herbs until the meat has fallen off the bone, then served in a thin stew of yogurt and almonds with bread. Another lamb dish, the Kharoof Mahsi, is a combination of baked lamb, ground beef, chickpeas and pine nuts. More familiar dishes from the charcoal grill include a variety of kabobs featuring meats, fish and seafood. Virtually every dish is served with a steaming pile of aromatic, perfectly prepared basmati rice garnished with tiny bits of vermicelli and nuts.

Freshness is a huge component to all of the dishes — down to the mint, which Abu-el-Hawa grows on Darna’s roof in big planter boxes, adding a nice dimension to the green roof concept. As you eat your way through the menu, from the well-known small plates to the more unusual main courses, you almost cannot help feeling virtuous. It a healthy reminder of why the Mediterranean diet is renowned the world over.

But if all that goodness is too much for you, try one of the rich desserts. Kanafa is a traditional, hearty baklava-type pastry of shredded wheat, sweet cheese, baked sugar glaze and pistachios. On the unconventional side, the chocolate fondant, one of Dawaliby’s specialties, is a dense chocolate cake served with decadent vanilla ice cream that will undo all the good intentions of a healthy meal in just a few bites, but it is worth it.

On the liquid indulgence side, the restaurant benefits from being the little sister of a lounge, offering many inventive cocktails that complement the cuisine beautifully. Eric Tollar developed Darna’s beverage program and while he has since moved on, he left behind a collection of cocktails that rely as heavily on freshly prepared ingredients as chef Dawaliby’s menu does. Tollar’s version of a dark and stormy is based on a house-made ginger beer that is more peppery than most — it’s a delicious brew, but not for delicate palates. Tollar also developed a series of cocktails named after cities from the region such as the Tangier — Ciroc peach vodka, triple sec, Chambord, fresh lemon juice and Sprite — and the Beirut — vodka, Frangelico, fresh lime and simple syrup.

There are many Lebanese restaurants in the area, and plenty of them are good. Darna is certainly among the best in its food preparation, but it is also something more. Though it began as a lounge that served food, and not just as a club, as the owners are quick to point out, it has broadened its appeal significantly by opening a restaurant that caters exclusively to people wanting eat a good meal in a comfortable, homelike atmosphere — albeit one that also captures the exotic allure of the Eastern Mediterranean.

As with any home, though, you sometimes have to be patient. Service, while usually agreeable, can sometimes be a bit slow. The kitchen is serving both the restaurant and the lounge, which may account for the occasional glitch. But the ambiance is so welcoming that you hardly notice it. And the food is so wonderful that you hardly care.