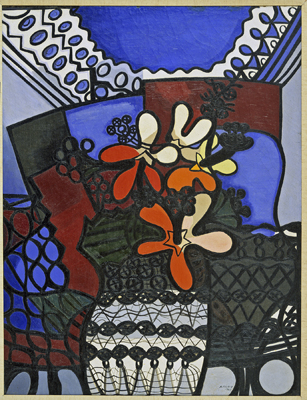 Amelia Pelaez’s “Marpacífico (Hibiscus)” is among more than 60 works of Latin American art that traveled from D.C. to the University of Oklahoma for the show “Libertad de Expresión: the Art Museum of the Americas and Cold War Politics.”

Mark White, chief curator of the Fred Jones Jr. Museum of Art at the University of Oklahoma, wanted a comprehensive, modern Latin American art exhibition for his museum. He looked at a few other institutions, including the Art Museum of the Americas (AMA) in Washington, D.C., for some pieces. But when he closely examined AMA’s works, he said that “something intuitive” emerged from the items on his checklist — the pieces all had freedom of expression themes.

The result became “Libertad de Expresión: the Art Museum of the Americas and Cold War Politics,” an exhibition at the University of Oklahoma museum that showcases the role of art in international affairs and specifically the advancement of Latin American art from the 1940s to the 1990s.

The exhibit — the largest showing of the AMA’s collection in the United States in six years — is a sign of the tremendous growth of the AMA, which promotes the art of the Organization of American States member states. As such, the museum often highlights themes of democracy and development, which artists across South America and the Caribbean explored in the post-World War II period.

“Many of the works were consciously engaging in a dialogue that was really international,” said White, who is currently the interim director at the Norman, Okla., museum. “The styles they were working on were prevalent in Europe and the U.S.”

In fact, the communist tensions that arose in Europe in the late 1940s gave birth to the Organization of American States, whose charter emerged from the Ninth International Conference of American States convened in Bogotá to address the spread of international communism. That charter also noted that cultural diplomacy was key to the OAS’s central mission of promoting understanding throughout the Americas. 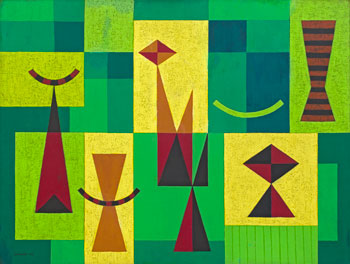 Mario Carreño’s untitled 1954 oil painting is among the works in the collection of the Art Museum of the Americas that depicts the evolution of Latin art from the 1940s to the 1990s.

“Libertad de Expresión” attracted Latin American experts like Claire Fox, author of “Making Art Panamerican: Cultural Policy and the Cold War” and a professor at the University of Iowa, to work on the yearlong project.

“It’s just an incredible boon for scholars and people who have an interest in Latin America,” said Fox, who served as researcher for the exhibition and also spoke at the symposium that preceded the show’s opening reception in October.

Among the main works in the exhibition that Fox mentioned is the renowned “Estudiante Muerto (El Velorio) | The Dead Student (Vigil)” by Colombian painter Alejandro Obregón. The dramatic red oil painting commemorates the deaths of La Violencia, the 10-year civil war in Colombia that raged from 1948 to 1958.

Another is an oil painting called “Agonia (Agony)” by Japanese-Brazilian artist Manabu Mabe. White surmises that the piece’s abstract form and colors — predominantly dark blue with bold splotches of red and brown — expresses some inner turmoil.

“There’s some speculation of maybe that post-war alienation that one often talks about amidst the Cold War — that there’s this general negativity that’s pervasive in the early 1960s,” said White. “It’s a very interesting painting — probably one of my favorites.” 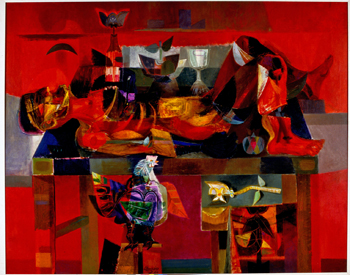 One of the works that illustrates the region’s diverse styles comes from Venezuelan artist Jesús Rafael Soto, whose “Escritura Hurtado (Hurtado Writing)” is a mixed-media piece featuring a panel with vertical stripes and a series of wires suspended in front of it.

The Fred Jones Jr. Museum’s permanent collection includes paintings previously owned by the U.S. State Department in the beginning of the Cold War to showcase America’s diverse forms expression abroad. When Congress shut down those efforts, the university museum purchased in 1948 a good chunk of the collection — 36 paintings — including works from American artists such as Stuart Davis, Georgia O’Keeffe and Edward Hopper.

Earlier in the spring, the museum reunited other former State Department works, acquired by other institutions, with its own in an art exhibition called “Art Interrupted: Advancing American Art and the Politics of Cultural Diplomacy.”

For AMA, the partnership with the Fred Jones Jr. Museum is significant. “Libertad de Expresión,” which means freedom of expression, marks one of the organization’s largest displays of its works. Past showings outside Washington, D.C., have been held at the Centro Cultural Palacio la Moneda in Santiago, Chile, in 2010 and 2011, as well as the Latino Cultural Center in Dallas, Texas, in 2007.

“It’s a tremendous way to promote what we do and our collection,” said Adriana Ospina, collections manager at the AMA, who noted that the exhibition is expected to return to D.C. some time after it runs at the Fred Jones Jr. Museum of Art.

Libertad de Expresión: the Art Museum of the Americas and Cold War Politics

through Jan. 5
Fred Jones Jr. Museum of Art at the University of Oklahoma
For more information, please visit www.ou.edu/fjjma/.

Kat Lucero is a contributing writer for The Washington Diplomat.