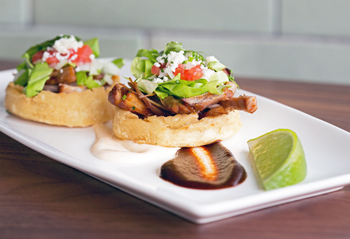 An appealing new addition to the rapidly developing Shaw neighborhood opened at the end of the summer under the watchful eyes of executive chef Ron Tanaka and his longtime friends and partners, general manager Sherman Outhuok and Paolo Sacco. The co-owners, all well-established professionals in the Washington area restaurant scene, bring a balanced pedigree to Thally.

The new 70-seat restaurant is the culmination of Tanaka’s distinguished career that began in the pantry of Morrison-Clark Inn in the mid 1990s and includes a string of stints with such local notables as Michel Richard’s Citronelle, Frank Ruta’s Palena and Eric Ziebold’s CityZen. Tanaka’s individual talent emerged when he took on the executive chef spot at Cork Wine Bar and later revived the flagging New Heights, earning it a spot on Washingtonian’s 2012 list of “100 Very Best Restaurants.”

Thally’s menu is short, but to call it limited would do a huge disservice to the abundant skill and creativity in each dish. Tanaka’s driving principle for Thally (pronounced TAL-lee) is simple, fresh and flavorful modern American cuisine. Everything is certainly fresh and very flavorful, but the simplicity is of the deceptive variety that only an experienced chef with a deep understanding of ingredients can achieve.

The crab roulette, a crisp, thin, wonton-like tube filled with sweet peekytoe crab lumps, is a good example of how Tanaka puts together just a few ingredients to create a thoughtful dish. He pairs the rolls with a spare, crisp cauliflower tomato salad dressed with Old Bay vinaigrette and dill. The preparation is simple; the taste is superb. The same is true of the rockfish, with the filet pan seared and served atop fresh corn salsa, French beans, tomato and bits of tarragon.

Tanaka also grills a nicely sized T-bone pork chop and serves it over a bean puree with greens. Though reminiscent of a classic Southern dish, the accents of ginger and a surprising grilled scallion add an international note. The pork itself is moist, tender and exceptionally flavorful, an effect Tanaka achieves by bringing the pork on mustard.

Tanaka is a master griller, evidenced not only by the pork, but also a Delmonico steak and branzino. The steak, cooked to a tee, is dusted in coffee and served with baby spinach and a rich bordelaise sauce, while the branzino European seabass is served with eggplant caponata, basil and piquillo jus.

Because Tanaka is focused on offering the freshest ingredients, he substitutes ingredients regularly and each visit is likely to offer a few surprises — enhanced by the fact that he’s not necessarily wedded to American cuisine.

The carnitas sope — small, thick rounds of fried masa piled with shredded strips of rich, salty pork and accents of red chili sauce and crema — is a faithful rendering of this traditional Mexican dish. Tanaka takes advantage of the dish’s inherent flexibility by adding a touch of feta and fresh vegetables to lend an interesting new dimension to a Mexican classic. 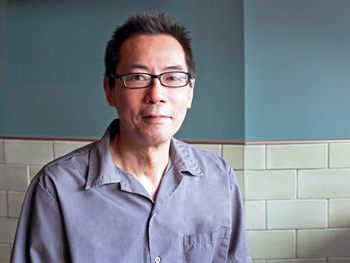 Ron Tanaka, executive chef of Thally, began in the pantry of Morrison-Clark Inn in the mid 1990s and has worked at such local notable restaurants as Michel Richard’s Citronelle, Frank Ruta’s Palena and Eric Ziebold’s CityZen.

Thally typically offers a soup as one of the first courses. Earlier in the season it was a chilled cucumber soup with hints of cumin, dill and mint, making it difficult to tie to any specific cuisine or region. Tanaka is doing more robust varieties as the weather cools, and on a recent visit he offered a cabbage soup whose bland name belied its elegance. The dish arrived with a small pile of roasted gold beets, braised red cabbage, duck confit and crème fraîche. The server poured a pitcher of hot leak puree over the ingredients and voila, soup. Who would’ve thought cabbage soup could be so delicious and playful?

Tanaka clearly enjoys playing with presentation, perhaps nowhere more so than with the watermelon, tomato and goat cheese first plate. Built to look like a sushi dish, the watermelon’s pink flesh doubles for raw tuna and pink ginger. Another vegetarian dish displays equal whimsy. The vegetable medley main course — a hearty combination of Swiss chard, tarbais beans, mushrooms and shallots — is topped with fennel that is prepared to look like an octopus sitting astride a bed a kelp. Funny and tasty.

Tanaka keeps up the creativity on the dessert side. For presentation, the bergamot ganache with chocolate tuile and candied orange is as dramatic as any French delicacy. Just as inspired is the celery root panna cotta (odd sounding but delicious) that is topped with apple gelee and served with red wine reduction, streusel and hazelnut gelato.

While Tanaka is busy in the kitchen, Sherman Outhuok takes care of the front of the house. Outhuok has been in the restaurant industry since his first teenage job at McDonald’s. He knew from the beginning that he loved the day-to-day interaction with customers and later extended that interaction to being behind the bar. Thally is the first restaurant he has planned from the ground up, giving him the chance to bring together the bartending skills he honed at Maple in Columbia Heights and Posto, where he developed the citrus “cello” liquors he is serving up to Thally customers. 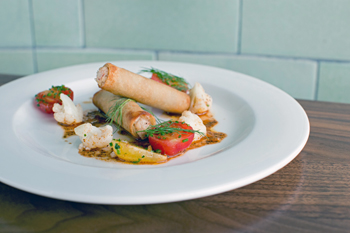 Outhuok has also developed a few tempting “Thallytails,” including the agave guava, an enticingly sweet combination of Sauza Reposado tequilla, elderflower liqueur, guava puree and house-made sour mix. Outhuok takes an interesting approach to Thally’s beverage program. In addition to the cocktails and cellos, he serves about two dozen wines by the glass with a rotating list that changes weekly, craft beers on draft, and a couple of ciders on tap and in bottles. House-made sodas round out the beverage menu, a plus for the designated driver.

Thally is located in Shaw’s Blagden Alley-Naylor Court historic district, one of the last remaining vestiges of the alley neighborhood phenomenon that characterized the District’s development after the Civil War. With a serious housing shortage, builders packed in small houses, stables and shops into the alleyways that ran behind the larger houses on the main streets, especially in Shaw. Though most of the neighborhoods are gone now — new alley dwelling construction was prohibited after 1934 and many of the buildings were torn down because they had become dilapidated and harbored criminal activity — what is left in the Blagden Alley-Naylor area is developing into a robust neighborhood, with residents who share the earlier occupants’ strong sense of community. 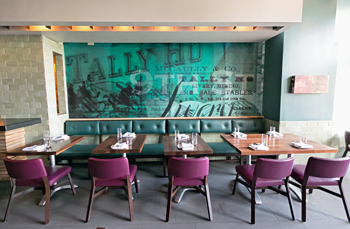 The partners chose this location for their first venture together to be part of this evolution. Though the caliber of the food corresponds to a high-end destination restaurant, the partners aimed for a casual, low-key neighborhood spot that evokes the area’s close-knit past while looking forward to its future.

Heavy wood tables, exposed brick wall, reclaimed woods and vintage barn door hardware conjure the busy bygone industrial spirit of the area, where workers from the surrounding businesses could order their meals from the blackboards touting the daily specials. In the same vein, the atmosphere is comfortable, with music at a reasonable level so conversation is possible at a normal tone. The service is casual but attentive (though the food is not always quick to arrive but is well worth the wait).

The partners called on local graphic designer and artist Matthew Hlubny to develop a design theme that bridges the area’s past and its vibrant future, with Thally at the heart of it. Hlubny melds images and text from advertising for the stables, row houses and carriages houses that once dominated the area into colorful graphic images on huge panels that grace the walls of the shoebox-shaped space (and restrooms). Called out in one of the panels is the Tally-Ho Stables, once housed behind the restaurant in the alley and now the D.C. public records office, which gives the restaurant part of its name; the other part comes from co-owner Outhuok’s daughter Thalia.

Thally currently serves dinner, but the owners plan to offer lunch once things settle down — good news for visitors attending events at the nearby Washington Convention Center.

One of the most appealing features of Thally is its absolute lack of pretention. Tanaka and Outhuok are serious about creating a place where you can get top-of-the-line food and drinks yet feel completely comfortable in whatever you are wearing. It’s a neighborhood spot that’s true to its roots but sure to evolve into a dining destination in its own right.

Reservations: Accepted via online and telephone