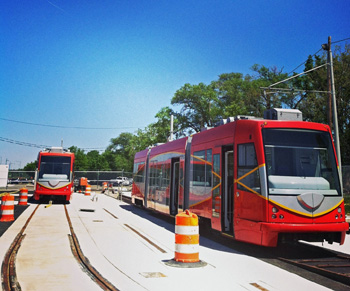 For a century streetcars crisscrossed Washington, D.C., ferrying residents, visitors and commuters from as far away as Cabin John, Md., and parts of Virginia to locations in Georgetown, Dupont Circle, Mount Pleasant, Capitol Hill, and the Navy Yard. By the time World War I began, more than 200 miles of streetcar tracks existed in the region, with 100 of those in D.C. alone.

But by 1963, that extensive network ceased to exist. Pressured by the ever-expanding use of the personal automobile and largely replaced by the more cost-effective public bus, the D.C. Board of Commissioners and Congress opted to tear up its tracks and sell off its streetcars. To date, the only reminder that streetcars ever ran in D.C. are small segments of rail tracks maintained for posterity’s sake along two residential roads in Georgetown.

Now, though, D.C. officials are looking back as a means to move forward. Later this year, the city expects to launch the city’s first streetcar line in more than 50 years — a 2.4-mile route along H Street and Benning Road, NE. The new line, which will connect Union Station with commercial and residential areas to its east, will only be the start of what D.C. hopes will eventually be a 37-mile network connecting the city in the same way that the old network did before it.

Under the city’s current plans, D.C. could eventually have one of the country’s most robust streetcar networks, with lines offering direct connections between various neighborhoods and fueling economic growth along currently underserved commercial corridors. It would also put the nation’s capital on par with many European cities that have long relied on electric-powered rail cars (also called trams and trolleys).

Beyond H Street, the 37-mile network that planners have envisioned includes a line extending west from Union Station and along K Street to the Georgetown Waterfront, while another stretch would run along 7th Street, NW, linking the Southeast Waterfront to the Georgia Avenue commercial corridor all the way up to Takoma. Rhode Island Avenue, NE, could get its own line, and one could also appear along Martin Luther King Jr. Avenue in Southeast Anacostia.

Despite investing in an extensive Metro system in the late 1970s and promoting new options such as car-sharing and bike-sharing today, city officials say that streetcars would help fill gaps in the city’s transit network. Additionally, they argue, the prominence and permanence of the streetcars would increase economic opportunities and spur new development.

“Metrorail service … is not equally available throughout the District and does not reach certain areas with high demand for premium transit. The proposed streetcar system is planned so that it would reach many of those areas, tying them to each other and to Metro. Unlike Metro, the above-ground nature of the streetcar would increase its visibility and expand opportunity for visitors and others to experience the city visually,” said a January 2012 report from the D.C. Office of Planning on the proposed streetcar network. 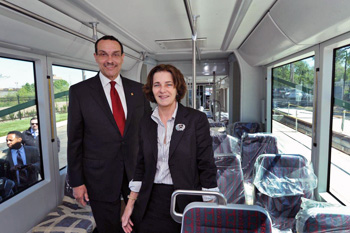 D.C. Mayor Vincent Gray, left, and D.C. Councilmember Mary Cheh board one of the new streetcars that will soon traverse city roads after a 50-year absence.

That city’s study also found that once the system is completed, the benefits to residents and future development could be significant. According to the Office of Planning, the share of D.C. households with convenient access to rail-based public transit would increase from 15 percent to 60 percent. Additionally, retail spending in corridors served by the streetcars would increase by $300 million annually, and between $5 billion and $8 billion worth of new development would occur within the decade after the network’s completion. All told, claimed the report, streetcars would bring in between $238 million and $291 million in new revenue to D.C. coffers.

According to Kenneth H. Rucker, who runs the National Capital Trolley Museum in Silver Spring, Md., city officials aren’t just being hopeful —they’re drawing lessons from what happened when the region was filled with streetcars in the past.

“Streetcars, whether they were horse-drawn, cable-drawn or operated with electric motors, are often referred to as the cars that built our cities,” he said. “If you compare a modern Metro map to a map of the horse car, cable car and electric car lines in Washington, you would find that many of the communities served today had their origin as streetcar suburbs or streetcar communities within the city.”

Rucker says that development patterns throughout the region were shaped by the streetcar lines, and city officials hope that same pattern applies as they build out the new network over the next few decades. This, they say, holds especially true in commercial corridors still struggling to revive after the 1968 urban riots that left many of the city’s neighborhoods abandoned — including H Street, where the first line will run and where investment has swelled ahead of its arrival.

Given the economic potential, D.C. isn’t the only local jurisdiction that’s seeing value in streetcars. Virginia’s Arlington County has also started planning for two streetcar lines, one running along Columbia Pike, the other along Jefferson Davis Highway in Crystal City. According to initial plans, the two lines would converge at Pentagon City. County officials estimate that the new streetcars could add up to 37,000 jobs, 21,000 residents and 11,600 units of housing by 2040.

D.C. officials have also said they’ve discussed the possibility of connecting the city’s eventual network into one that could sprout up in Maryland, highlighting that the eventual success of the future streetcar network might rest on doing what was done in the past — making it regional. 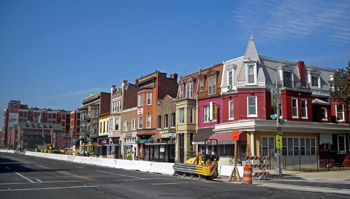 H Street in Northeast has been undergoing construction in preparation for a new streetcar line that will run from H Street and Benning Road.

“The District is no longer the District. All of our transportation projects from this point on are going to cross boundaries,” said Terry Bellamy, director of the D.C. Department of Transportation. “We’re talking to Montgomery County, we met with Prince George’s County. All of us now realize that whatever we do in our particular communities may have an impact outside those communities. What we’re doing on our side and what they’re doing on their side have to match.”

Despite the city’s ambitious plans, at this point the majority of the 37-mile network only exists on paper. Though the H Street line will roll out later this year, city officials are still looking for financing opportunities for an initial 22-mile priority network that they expect to cost $1.2 billion. Last year, D.C. put out requests to private companies — both national and international — for proposals on a public-private partnership for the next streetcar lines. The city received 20 responses, including from firms in China, France and Australia.

City officials are also preparing to deal with more practical challenges. As they get closer to running service on H Street, they’ve had to consider how to educate drivers who will have to learn to share the road with the new trolleys. They’re also dealing with building the infrastructure to support and maintain streetcars, while negotiating with the federal government to avoid violating a law that forbids overhead wires in certain parts of the city.