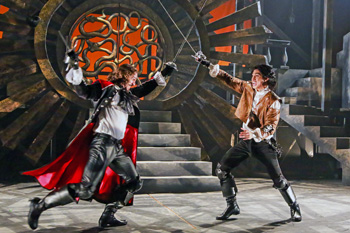 Synetic Theater ventures into new territory with its swashbuckling production of “The Three Musketeers,” featuring Peter Pereyra as Rochefort and Dallas Tolentino as D’Artagnan.

Synetic Theater, acclaimed for its eclectic wordless storytelling of classics, is trying something new: dialogue. Its current adaptation of Alexandre Dumas’s “The Three Musketeers” — in an attempt to steer the company away from being too predictable, perhaps — combines spoken word with a fury of dramatic sword fighting and acrobatic movement. The result is a graphic novel come to life, complete with superheroes, villains, political intrigue and scandal, all orchestrated by an exquisite original score.

Synetic’s founding artistic director Paata Tsikurishvili should be commended for, as he put it on opening night, “always pushing the envelope.” However, another saying comes to mind: “If it ain’t broke, don’t fix it.”

The production delivers Synetic’s expected physical mastery, here in the form of boisterous, swashbuckling duels and on-stage combat, but withholds what the theater has become so well loved for in the D.C. community since its inception in 2001. That is its signature modern dance choreography that is both ethereal and haunting in the absence of speech. Save for one tango-inspired number later in the play, dance, per se, is absent here.

It makes sense to use dialogue for a play whose plot is probably not as committed to memory by the general public as is, for example, Synetic’s upcoming summer production of Shakespeare’s “A Midsummer Night’s Dream.” Though it’s basically a tale of a young boy (D’Artagnan) who comes to the big city (Paris) to sow his wild oats (become one of the king’s Musketeers), the plot has many twists and turns.

In 17th-century Paris during the reign of King Louis XIII, Queen Anne has an illicit affair with the Duke of Buckingham, while the Cardinal Richelieu, who’s after the king’s power, tries to out the affair with the help of a temptress named Milady and his henchman Rochefort. Unraveling the king also includes torturing and humiliating the Three Musketeers, who, along with D’Artagnan, embark on a mission to save the queen from disgrace and death. 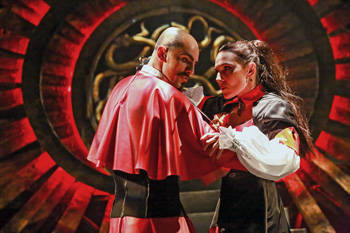 Dan Istrate as Cardinal Richelieu and Irina Tsikurishvili as Milady.

The plot is a mouthful. Although dialogue helps to navigate it, mixing verbal discourse with movement isn’t as seamless as one would have hoped. Given the diverse, strong accents of its resident actors, Synetic should consider hiring a dialect coach for future such endeavors to maintain consistency in pronunciation.

For example, the mysterious Milady (played by Synetic’s cofounder Irina Tsikurishvili), who engages in an intimate and captivating tango with her former husband Athos, could have been more enigmatic if dance was her only form of expression.

Nevertheless, the production, written by brothers Ben and Peter Cunis, choreographed by Irina Tsikurishvili, and directed by her husband Paata, will most likely please connoisseurs of the age-old epic.

The play’s highlight, Dallas Tolentino as D’Artagnan, undoubtedly shines in physical prowess, charisma, and intense focus — the kind that comes with youthful loyalty and naïveté. He and his fellow adventurers/Musketeers, Athos (Ben Cunis), Aramis (Matt Ward) and Porthos (Hector Reynoso), leap, tumble and crawl like relentless spiders around the stage’s many surfaces with deftness and verve. The characters take to their roles as protectors of a weak king and subsequent mistreatment by their enemies in stride with a dash of bravery and humor.

Problems arise when the physical tricks and comedy start to fall flat from overuse and end up feeling more like gimmicks. Although the play is meant to be more folly than pensive fare, some characters could have shown more dimensionality. One unfortunate example is the director’s choice to make the king, played by Robert Bowen Smith, ultra-effeminate, presumably to drive home the fact he is a cuckolded and ineffectual partner for his beautiful and desirable queen. This decision is possibly humorous to some, but could potentially be interpreted as poor taste. 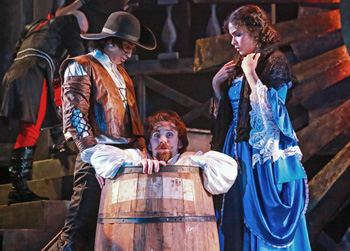 From left, Tolentino as D’Artagnan, Mitchell Grant as the Duke of Buckingham and Brittany O’Grady as Constance.

Help comes with the superb quality of the set and music, which keep the audience entranced and invested. Anastasia Simes’ set is striking, but instead of upstaging, it enhances the play’s action. A mammoth sun sits atop a platform whose protruding rays reach out to the corners of the stage while the interior is an entwinement of snakes (“Paris is a den of snakes,” warns a Musketeer). Characters enter and exit through the sun’s center, as if entering and exiting a den of dangerous reptiles.

Even more enchanting is composer and musical director Konstantine Lortkipanidze’s score. Its emotional crescendos perfectly accompany the plot’s build and excitement, and at times, even overshadow the passion on stage. The final musical piece could have easily accompanied no-holds-barred modern choreography from the well-equipped cast members.

But if you want an exciting, action-packed performance, this production will not disappoint. If you’re looking for goose bumps, you might have to wait for Synetic’s next project. This “Three Musketeers” is “all for one,” but alas, might not be “one for all” after all.