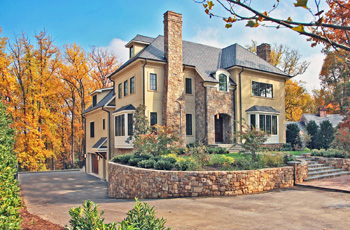 The brand new, 14,000-square-foot house in D.C.’s Wesley Heights neighborhood already had plenty going for it: five stories with eight bedrooms, eight full bathrooms and four half-baths on a lot situated minutes from Georgetown. Then 24 of the area’s best interior designers descended on it and turned it into a haven of modern technology mixed with comfort and livability.

“It turned out to be a strong house with a variety of design styles,” said Susan Hayes Long, DC Design House’s executive committee chairwoman, describing it as “fresh, organic, livable.”

The showpiece of this year’s DC Design House was located at 2507 Foxhall Road, NW.

The sixth annual DC Design House raised more than $200,000 for Children’s National Medical Center, bringing the total dollar amount raised for the center to more than $1 million over the last six years.

The stone-and-stucco property at 2507 Foxhall Road, NW, that was the showpiece for this year’s Design House attracted thousands of visitors, including celebrities such as actress Sharon Stone. It even made quite a scene when “Meet the Press” newsman David Gregory reportedly threw a temper tantrum on the front lawn of the Design House when parking in the neighborhood (where his home is located) became crowded because of all the visitors, according to the Washington Post’s Reliable Source.

That of course didn’t deter gawkers from checking out the glitzy design laboratory between April 14 and May 12 to get décor ideas for their own homes, buy some of the furnishings, or just get a glimpse inside a residence located in one of Washington’s priciest neighborhoods.

“It’s an honorable cause,” said Nestor Santa-Cruz, a second-time Design House participant and a member of the Washington Design Center Hall of Fame. “Design has many ways of enriching life, making it easier. But I always hope to inspire.”

He tackled the formal dining room, which sits to the right as you enter the house. Santa-Cruz said he drew inspiration from Washington’s global community.

“It’s about being in an international area of town, full of embassies,” he said. “I wanted to show how different styles can cohabitate. My task is to find the common language, a certain type of diplomacy of styles, with an American freedom to support it.” 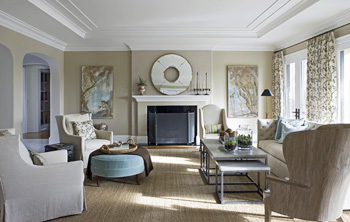 Santa-Cruz mixed Scandinavian furniture with Asian accents and a wall covering by Cannon/Bullock reminiscent of unfinished gray tiling. The centerpiece, as is expected in a dining room, is a circular table, the PK-54 by Danish designer Poul Kjærholm, which sells for more than $20,000.

“It raises questions such as why do formal rooms have to have the same 12 chairs in a row,” Santa-Cruz said.

For Terri Hartwell Easter and Ashleigh Bradshaw of Maris Elaine Gallery in Oxon Hill, Md., the biggest challenge was making a big statement in a small space. They were charged with the powder room and a hallway on the main level between the living room and library.

“We wanted to focus on creating a cohesive feeling between our space and the surrounding spaces and we tried to include elements from each room,” said Hartwell Easter. “The living room has more of a light and fluid feeling while the library is very masculine and a little heavier.”

To bridge them, the first-time participants chose artwork that worked with the library and painted the ceiling with a pop of yellow to add lightness — and surprise. “We did also want to follow our own design aesthetic — ‘black dress, good jewelry’ — which essentially means a great neutral palette with art and accessories as our statement pieces,” Hartwell Easter explained.

The biggest change, she said, was making a built-in bookcase into an art installation with an inset smoked mirror, custom shelving and “Thinking About Men,” sculptures of women’s heads by local artist Theresa Knight McFadden. It’s worth $2,500.

On the top floor, Jeff Akseizer and Jamie Brown of Akseizer Design Group in Alexandria, Va., created a social media lounge and hall gallery that includes a live reef fish tank by Reef eScape built into the wall unit. On the opposite wall is a flat-screen television with three other monitors alongside it for ultimate viewing. 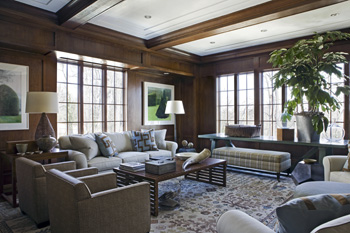 Makeovers were not limited to indoor spaces. The back of the house features several patios and a vanishing-edge pool. Over in the front, Amy Mills of DCA Landscape Architects took on the entry garden. She and her team had helped to design the landscape for the house when it was built, ensuring that grading worked with the entrance, driveway and garage. For instance, they raised the front yard with a stone wall to put the garden closer to the house and create a sense of being level with the driveway.

“The house is not symmetrical and so an overly formal landscape design seemed out of place,” Mills said. “We used evergreens and flowering trees in a balanced manner to add underlying structure, but then pulled in a softer, more casual look with the grasses, roses, hydrangeas and azaleas. The idea was to have interest throughout the year with a color scheme of whites, blues and peaches and pops of chartreuse leaf color.”

Through ticket sales, boutique buys and furniture purchases, DC Design House has raised $1 million for Children’s National Medical Center since its inception. In the past five years, 45,000 people have visited the houses.

Skip and Debbie Singleton, principals of DC Living Real Estate, founded the nonprofit Design House in 2008 as a way for local designers to showcase their talent while raising money for Children’s. For a house to qualify, it must be inside the Beltway and have enough rooms to accommodate 20-plus designers.

Design House committee members assigned each designer a space and they had 35 days to transform it. This was the first time a new house was selected for the event. Designed by GTM Architects, it can by yours for $14.9 million.

“The new construction was a nice breather this year as no one had to endure” demolitions, Hayes Long said. “The open plan and wide corridors have been well received by our visitors. This house definitely had something for every age, budget and design sensibility.”

The search for next year’s house has already begun, she said. “As soon as we shut the doors to this house, we get started looking for the next one. We look for something unique with a great history or a bit of mystery, good street presence and location.”

For more information on DC Design House, visit www.dcdesignhouse.com. Also see “Redecorating for a Good Cause in DC Design House Challenge” in the April 2012 issue of The Washington Diplomat.