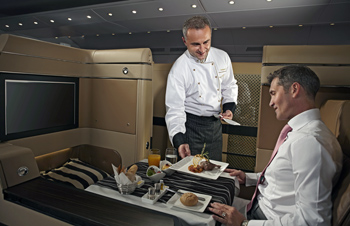 They say it’s the journey, not the destination. But when the journey involves air travel, those long security lines, layovers and delays sure make the destination look good. To make voyages more enjoyable — perhaps even relaxing — especially for first- and business-class passengers, many international airlines are offering amenities on par with those at five-star hotels.

“As an international airline, we put careful consideration into services which make our flights enjoyable for all guests across all cabins, particularly on the long-haul routes,” said Peter Baumgartner, chief commercial officer at Etihad Airways, the flag carrier of the United Arab Emirates.

From fine dining and onboard sommeliers to private suites and massage chairs, here’s a look at what paying premium prices buys you in the air.

Diamond First Class passengers on Etihad Airways can sprawl out in their own private suites and nosh on the airline’s “Kitchen Anytime” menu.

Established by royal decree in 2003, Etihad, the national airline of the United Arab Emirates, leaves no luxury unturned. The Diamond First Class category — available on half the airline’s fleet — means individual suites with Poltrona Frau leather seats that convert to flat beds as the centerpiece; built-in massage; a large wood-finished table; Arabic-style sliding doors for privacy; a 23-inch personal entertainment screen; a personal wardrobe with mirror; a personal mini bar; and four individual lighting options with dimmers. The first-class cabin also has a changing room with a leather fold-down seat and full-length illuminated mirror.

Food is available around the clock from the airline’s “Kitchen Anytime” menu, and choices are tailored to the route, typically including at least one “Taste of Arabia” dish and one Western option.

First-class goody bags, or amenity kits, for Diamond First Class passengers include the usual suspects — a toothbrush, toothpaste, ear plugs, socks and eyeshades — plus a few notable perks: La Prairie cellular time-release moisturizer, hand cream and lip balm. The bags themselves are a treat. Women receive a black cosmetic purse detailed with Swarovski crystals. Men get a black cufflink box filled with a shaving kit with a Schick Xtreme 3 razor and shaving cream.

Passengers also get slippers and tailored male and female sleeper suits, an offering the airline says is exclusive to its first class.

Etihad, named the “World’s Leading Airline” by World Travel Awards for the last four years in a row, is obviously doing something right. It posted record-level profits in the first quarter of 2013, with passenger revenues of $900 million, an increase of 19 percent over 2012 first-quarter figures. Similarly, the number of fliers in the first quarter of 2013 grew by 18 percent, up from 2.3 million to a record 2.8 million.

Etihad flies to 86 destinations in 55 countries and added a D.C. route to its list in March (also see “UAE Goes All Out to Promote U.S. Business, Charitable Links” in the May edition of the Diplomatic Pouch online).

Forget bigger seats and more legroom. First-class passengers on Emirates Airline’s A380, A340-500 and most 777 aircraft get private suites fully equipped with a sliding door, a personal mini bar, vanity table, mirror, wardrobe and privacy divider. Crew members can convert seats into fully flat beds with a mattress, duvet and blankets.

To help passengers stay and arrive fresh, Emirates partnered with the Italian company Bvlgari for its amenity kits. The men’s kit includes the Au Thé Rouge aftershave emulsion, eau parfumée and body lotion, as well as a razor from the British company Taylor of Old Bond Street. Women get Bvlgari nourishing face emulsion, hand cream and Au Thé Rouge eau parfumée. The usual stuff, such as Colgate dental kits, is in there, too.

Of course, passengers might not need all the perfumed lotions. The Airbus A380 planes, which have 14 first-class seats out of 489 total seats, also have “shower spas” made of walnut and marble. Guests can clean up with “timeless spa revive” or “relax” shower kits.

If all that relaxation works up fliers’ appetites, they can choose from a range of dishes prepared on demand throughout the flight and served on Royal Doulton fine bone china with Robert Welch cutlery. Or they can snack in one of two onboard lounges on the upper deck, which serve five-star delicacies, and sip wines selected by the company’s sommeliers or have cocktails prepared by an onboard bartender.

Adults don’t have all the fun, though. Youngsters get treats from the airline’s “Fly With Me Monsters” collection in the form of blanket buddies, seatbelt critters or magnetic sketchers. Older children get items designed in collaboration with Quiksilver, an American sports lifestyle brand, including travel folios, surf-styled Velcro wallets with Quiksilver graphics and game cards.

Emirates, wholly owned by the emirate of Dubai, offers flights out of Dulles.

The popular 87-year-old German airline eschewed the idea of private suites in favor of an open design that passengers indicated they favored in surveys. But privacy is still well respected: Flexible privacy screens are available to passengers in the eight seats that make up the first-class section. Sound-absorbing curtains separate the cabin from the rest of the aircraft and sound-insulating material in the carpet and the plane’s outer skin create what Lufthansa bills the quietest first-class section in the world.

Passengers don’t have to worry about bumping their heads on overhead bins after snoozing on their 6.5-foot beds. The airline also breaks form by omitting overhead bins in first class. Passengers get their own lockable closets instead. Additionally, Lufthansa recently became the first commercial airline to install an air humidification system. Soon, external video cameras will transmit images taken from the tailfin to passengers’ 15-inch monitors.

And if comfort has to give way to work, Lufthansa FlyNet, the first broadband Internet access on long-haul flights, lets you text, email, or simply surf online via Wi-Fi-enabled devices.

From its North American gateways — Dulles is one — Lufthansa operates 241 flights a week, making it the third largest transatlantic route network. 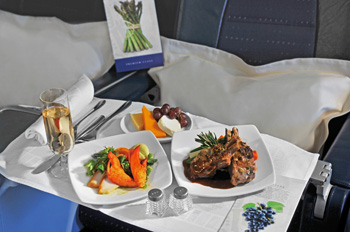 On a recent survey by Business Insider of “The 20 Best Airlines in the World,” which ranked in-flight experience and performance figures, South African Airways, above, came in 11th place.

Children stay occupied with kids’ meals, special programming and video games. They also get a keepsake kids’ pack with games and crayons.

SAA, founded in 1934, has flown the country’s diplomatic corps — including President Jacob Zuma — to assignments worldwide. Celebrities such as Martha Stewart, actor Forest Whitaker, Kim and Khloe Kardashian, and musician Gene Simmons of Kiss have also flown SAA. On a recent survey by Business Insider of “The 20 Best Airlines in the World,” which ranked in-flight experience and performance figures, SAA came in 11th place, tied with Cathay Pacific.

Daily flights out of Dulles go to Johannesburg via Dakar, Senegal.

If the way to passengers’ hearts is through their stomachs, Turkish Airlines is on target. Like South African Airways, its highest class is business, too, although the experience is all about pleasure. “Flying Chefs,” as they’re called by the airline, greet passengers and work alongside cabin crew, cooking and overseeing food preparation with the goal of providing “a five-star restaurant high above the clouds,” according to the company. Flying Chefs serve a variety of Turkish dishes in addition to international cuisine, such as Turkish meatballs, stuffed eggplant, caprese salad and walnut pear tart. 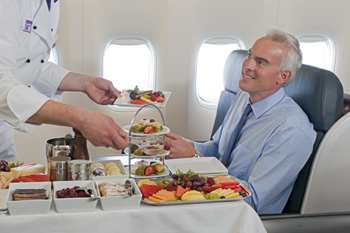 Turkish Airlines takes its food seriously, with “Flying Chefs” who greet passengers and work alongside cabin crew, cooking and overseeing food preparation with the goal of providing “a five-star restaurant high above the clouds.”

To accommodate full bellies, business-class seats include a massage button and an ottoman that creates a 75-inch-long sleeping space. The armrest also serves as a privacy screen and is controlled by a touch button.

For passengers who are making a pilgrimage to Mecca, Turkish Airlines offers a Hajj kit containing alcohol-free liquid soap, a prayer mat and an electronic tally counter to keep track of prayers.

The airline has five U.S. gateways, including D.C., getting passengers from Dulles to Istanbul in about 10 hours.

Flights from Washington to destinations in New Zealand and Australia aboard this 93-year-old Australian airline can take 25 hours. To help passengers stay refreshed, the first-class cabin features 14 private suites with Edelman leather seats that recline into flat, extra-wide beds with sheepskin mattress overlays and ottomans for in-suite companions. Controls on the bed’s armrest move the seat, leg rest and lumbar positioning to a fully flat bed of up to almost 7 feet. They also can be set to massage different body parts.

Forget lukewarm mystery meat on Qantas flights. Dining is taken seriously under the purview of executive chef Neil Perry, who has been with the company for 15 years. He flies to each Qantas destination to train staff in preparation and presentation when the seasonal menus change. Qantas and Perry were the first to offer a degustation menu in-flight, and first-class passengers have the option of an a la carte menu as well. Some flights also offer an eight-course tasting menu, and many have onboard sommeliers. Everything is served on tableware featuring designs by Australian native Marc Newson. 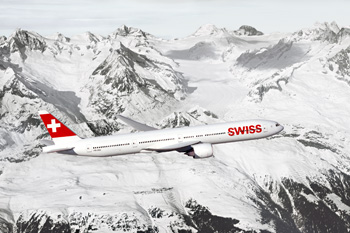 The 11-year-old company has a rule limiting the first-class cabin to just eight armchairs on long-haul aircraft. On its Airbus A330-300 planes, seats adjust to personal preferences for firmness and become flat beds. Privacy panels can turn a seat into an onboard office, and available tables and ottomans enable in-flight meetings.

The airline’s homage to its heritage is apparent in its dining options, too, such as — what else? — Swiss cheese and Balik salmon. In addition to standard multicourse meals, overnight flights offer a la carte menus and bottomless cups of Swiss Nespresso coffee. Since March 6, the business- and first-class cabins on long-haul flights from Switzerland have featured fare reminiscent of the canton of Grisons, or specifically of Michelin-rated chef Martin Göschel of the five-star Relais & Châteaux Hotel Paradies in Ftan.

When the leaders of Central American countries need to travel, they turn to TACA. So have celebrities such as Salma Hayek, Paris Hilton, journalist Andrés Oppenheimer, soccer star David Beckham and Pope John Paul II. The Latin American company’s highest class is business, which features wide leather seats, padded headphones and mood lighting that changes depending on the phase of the flight.

Business-class passengers also get an amenity kit in a bag made of Colombian leather and stocked with socks, L’Occitane hand cream, a sleep mask, lip cream or balm, pen, tissues, toothbrush and Colgate toothpaste.