Home The Washington Diplomat June 2013 Reading Into the Future With ‘Codex Mexico: The Book as Art’ 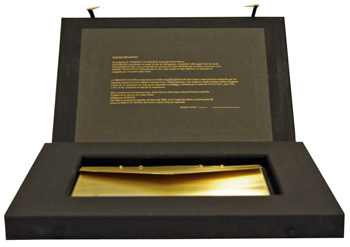 Handcrafted books that have been re-imagined as artwork are the focus of the exhibit “Codex Mexico” at the Mexican Cultural Institute, which is displaying works by artists such as Naomi Siegmann.

The idea of books as art — the printed word re-imagined as a work of art in its own right, using illustrative and contextual materials not always associated with books — is not new. But it’s still somewhat revolutionary.

“Codex Mexico: The Book as Art,” the comprehensive, thought-provoking new exhibition at the Mexican Culture Institute, lays out the unique medium’s broader history, noting that codices and printed material date to pre-Colombian times in Mexico and the Roman era in Europe.

While printers and artisans have been crafting handmade books for quite some time, the art world, specifically museums, had not taken much of an interest in the notion of books as art until recently. In fact, the National Museum of Women in the Arts has pioneered exhibitions on books as art since the 1990s under the aegis of Krystyna Wasserman, curator of book arts at the museum.

Books as art are technically not books to read, though they often include text from stories, poems, fragments of tales or statistical tidbits. They are constructions, meant to be treasured and appreciated but not carried around or studied for information. They are vivid illustrations of the enduring potential in these conduits of knowledge — even as they face formidable changes.

In the digital age where an iPad is marketed as containing access to the world, the idea of books in the traditional sense — bound with printed pages and read in solitude or in libraries — has become quaint and lost much of its appeal. Information and words, the stories we tell each other, are now contained on a tablet or in a text message. There is an app for literature and art, it appears.

But not at the Mexican Cultural Institute, where 22 artists push the boundaries of bookmaking convention while also reviving a long-lost art form: appreciating books. 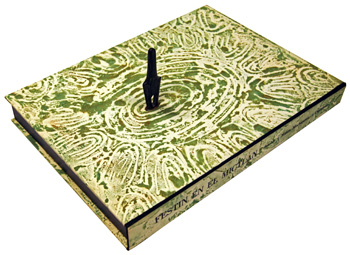 These books — which were made in Mexico, California and Australia — contain fiction, history, poetry and prose by well-known writers such as W.S. Merwin. But they’re also home to paintings, drawings, photographs and less easily classified materials and genres.

The Californian elements hail from a 2011 exhibition at Stanford University’s Iris & B. Gerald Cantor Center for Visual Arts called “The Art of the Book in California: Five Contemporary Presses.” In fact, the fertile atmospheres of those five press shops are duly credited in the works themselves: “Moving Parts Press,” “Foolscap Press,” “Ninja Press,” “Turkey Press,” and “Peter Koch, Printer.” Koch himself has several works here and is considered a leader of the books as art movement and contemporary codices.

The three different places where these artisanal books come from — Australia, California and Mexico — have a kinship with one another in the material that dates back to indigenous groups in all three locales, as seen for example in the Native American content in the California books, including “The Lost Journals of Sacajewea.”

In this exhibition, you’ll be tripped up and perhaps a little bewildered by the sheer variety of content and styles — from a powerful meditation on the evils of slavery to a wonderfully witty creation called “Herakles and the Eurystheusian Twelve-Step Program,” whose binding is designed to separate the 12 steps into single pages that fan out, illustrated with vase paintings. 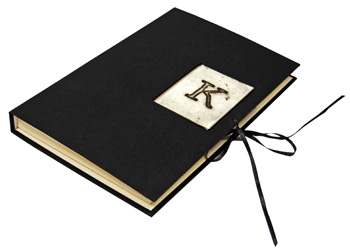 Books have always had a dual character. They’re thick and full of words and images, but also have a distinct physical presence — with the weight and texture of their paper, the imbroglios of ink and print, and their sometimes-dusty covers, standing like architectural constructions. Books as art are more like boxes within boxes, whose pages you can’t turn and content you can’t fully absorb.

But there’s the tantalizing hint of words here and, most importantly, the essence of what makes a book still viable today: its ability to open our eyes to a different world — not in the digital realm, but one that unfurls inside our own imaginations.

So here we are in the 21st century, a time of the tablet and not the book. Perhaps that’s why this exhibition is at once engrossing and thrilling, yet somehow sad. These works reinforce the fundamental allure of books, which are being threatened.

Looking at these creations, you of course want to read into them further, take them and hide them away from prying eyes, which seems counterintuitive. You want the whole story, see it in context. But books as art resist complete understanding, offering snippets and recreations of the whole.

What they do, though, is entice us to appreciate a piece of our history that hopefully still has a place in our future.

Codex Mexico: The Book as Art