Contemporary artist Shaun Gladwell captured images of Australian soldiers serving in Afghanistan in intimate photo-graphs and videos that offered unusual perspectives of the war, including portraits from the back and scenes of troops resting.
It is easy to get caught up in the loud headlines and muddled politics of armed conflict while overlooking the perspective of those directly at the forefront: the servicemen and women in warzones. With foreign combat troops expected to withdraw from Afghanistan by 2014, a timely new exhibition at the Embassy of Australia, “Point of View – Afghanistan,” focuses on these individuals’ perspectives through intimate photographs and striking video.

“These works provide a unique perspective on the war at a time when both United States and Australian troops are preparing to leave Afghanistan,” said Australian Ambassador Kim Beazley, who officiated the exhibition’s opening reception in Washington.

The original exhibition, “Shaun Gladwell: Afghanistan,” included 10 photographs, two paintings and three video pieces. Gladwell included the addition of “Sleeping Soldiers” in the display at the Australian Embassy to provide another lens through which viewers can reflect on the complexity of life in a warzone.

The images show soldiers sleeping in seemingly various stages — while one appears to be fast asleep with his mouth open in fatigue, another has his eyes closed but is gripping a tool in one hand and a water bottle in the other, prepared to wake up to attention at any moment.

“It was the best way for me to present vulnerability, exhaustion, escape and rest,” Gladwell said. “I was also thinking of the idea that sleep or rest is a removal from the intensity of war, and it is also the state in which the war and its trauma will return to many who have experienced it.” 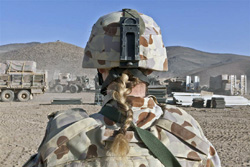 The Afghanistan project was vastly different terrain for Gladwell, a Sydney native known in the art world for his “performance landscape” video and photographic works depicting urban subcultures and extreme sports such as skateboarding and BMX bike riding.

In 2009, he was commissioned by the Australian War Memorial to spend two weeks with the Australian Defence Force in the Uruzgan province of Afghanistan. The mission was part of the institution’s Official War Art Scheme, which dates back to 1917 and is Australia’s oldest ongoing art commission. Gladwell is the first digital artist tasked with venturing into conflict areas with Australian military forces under the initiative. The resulting work, which will be archived in the memorial’s permanent collection, represents the first time video has been used as a medium by an official Australian war artist. 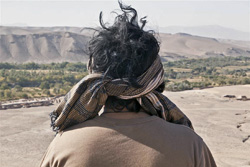 “It has been really refreshing to work with that kind of open-mindedness — actually getting things done and swiftly in spite of institutional bureaucracy,” said Emma Crimmings, the program manager of cultural affairs at the Australian Embassy and curator of the Gladwell display in D.C. “Let’s face it: Servicemen and women all over the world use photographs, videos and Skype to send messages home to their families. So it is perfectly logical that an artist would use the same mediums to reflect the changing technologies.”

Further reflecting the Australian War Memorial’s gradual move toward embracing newer technologies is Gladwell’s dual-screen, floating video display of synchronized film titled “POV mirror sequence.” With a loud whooshing sound of wind on sand emanating from the screens in the small, dark corner of the gallery, spectators find themselves in front of a live mise en abyme: On the left, a soldier is seen walking in a circle and holding a camera, while on the right side, Gladwell is complementing the circular walk, also with a camera in his hand. The two — serviceman and artist — are filming each other at the Tarin Kowt military base in Afghanistan, and with each step they take, the viewer feels encircled. In a recorded interview, Gladwell confirms this sensation, explaining that the effect is one of being caught in the “image crossfire.”

As an artist, Gladwell is constantly intrigued by the interplay of landscape and bodies — as seen in the arid isolation of “POV mirror sequence.” He also has an unconventional way of capturing perspective.

The main portion of the embassy exhibition features a wall of eight portraits shot from behind the subjects, presenting their respective points of view — hence the exhibit title. Each snapshot documents a different visual perspective, with the large outline of an individual giving way to the various horizons in front of him or her: blurry mountainous terrains, barbed wire fences, Humvees, etc. 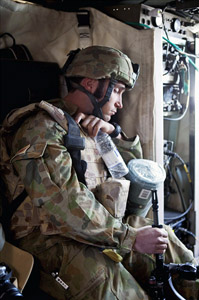 “If you boil it down, the purpose of sending an artist into that kind of environment is providing a very unique point of view, and only through the eyes of someone who sees the world differently can you access it,” said Crimmings. “Here, what Shaun is trying to see as an artist is the point of view of the servicemen and women. Hence the shots from the back — what they’re looking at, what their experiences are. It’s also quite vulnerable … who’s coming behind you. In a city, that’s not so bad; in a warzone, that’s kind of bad.”

Vulnerability is an inevitable part of human nature and, particularly, war, yet so is overcoming it with acts of bravery. Gladwell’s video “Portrait of Mark Donaldson VC” reflects on the soldier who was awarded the Victoria Cross, the highest military decoration in Australia, after he exposed himself to enemy fire in Afghanistan in 2008 to save the life of a wounded interpreter and protect injured troops. In Gladwell’s installation, Donaldson’s perspective is shown as he is sitting inside a Black Hawk helicopter looking out over a vast, empty landscape below.

Though we see his face, unlike Gladwell’s back-of-the-head portraits, his expression and mood are hard to discern. It reinforces the fact that there is only so much viewers who’ve never experienced war can understand about those who have. But through his humbling, eye-opening work, Gladwell pulls back the curtain on the theater of war just a bit, revealing an on-the-ground perspective that’s both instructive and illuminating.