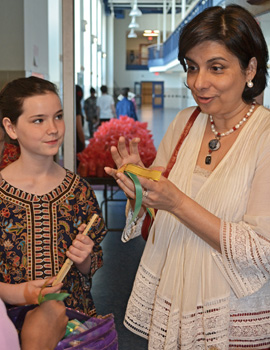 It’s obvious when you first meet Gouri Mirpuri, wife of Singaporean Ambassador Ashok Kumar Mirpuri, that she is not only extremely active but also deeply inspired to act on social issues ranging from youth empowerment to environmental sustainability.

“I want to create social impact in everything I do,” said Mirpuri, a passionate activist and author who has written several books and publishes a regular environmental column in Globe Asia, a business magazine.

“If I feel something is wrong, I have to do something about it.”

And she has done plenty, both in Singapore and in nearby Indonesia, where her husband served as ambassador before coming to Washington, D.C.

Gouri Mirpuri is the founder of the Learning Farm, an organic farm that helps to provide livelihoods for Indonesian street children, and she’s the co-founder of the HUB in Singapore, a collaborative space for Asian social entrepreneurs that’s part of a global network of 6,000 innovators in nearly 40 HUBs across five continents. She’s also the founder of I-Hear, a support and advocacy group for the deaf, and an advisor for the International Dance Festival of Indonesia.

Here in Washington, she’s continued her can-do attitude and activism, serving on the board of the Environmental Film Festival in the Nation’s Capital. More recently, a local CVS store became one of her targets for change.

“When you buy something at CVS, they give you this three-foot-long receipt with endless discounts and conditions that is too long for the wallet,” she explained. “So I just yesterday wrote an e-mail to ‘Mr./Ms. CVS’ suggesting that instead of all this waste in paper and ink, it would be much more efficient to reduce the font size, not be repetitive and, better yet, make it a mobile app.

“I got a ‘thank you’ back, saying it was a good suggestion and they would take it up at the next big meeting. How nice!”

One of her biggest achievements is perhaps the Learning Farm, whose premise is to give Indonesia’s street children and vulnerable youth a new future. After four months of living and working on an organic farm, these children take their newly acquired skills back to their villages and use them to not only make a better living but also to teach others better agricultural practices while providing healthy food to themselves and their families.

As the Learning Farm explains on its website, “This social entrepreneurship program aims to empower marginalized youth. Along with organic farming, they are taught enterprise development and other valuable life skills, which enables these youngsters to become more economically self-sufficient, capable and productive members of their communities.”

Mirpuri called it an opportunity for these children to use their hands and their heads through “additional life-skills training, such as computers, English and first aid,” and “to enrich their hopeful hearts through the recognition of their ability and existence to encourage their self-confidence.”

She hopes that in Indonesia, where roughly 70 percent of the population earns a living through farming, these “young boys and girls will find inspiration and a sustainable lifestyle working with nature.”

Mirpuri then went on to establish the HUB in Singapore, which has grown into a vibrant space for “a community of like-minded entrepreneurs and social entrepreneurs to connect, mingle and have coffee with” — not just in Singapore but now throughout the region.

The HUB in Singapore is the first of its kind in Asia. In the United States, “three HUBs are open in the Bay area; there’s one in Seattle, New York and Denver. Boston also very soon,” Mirpuri said proudly, “and one will open here in Washington anytime.”

According to its website, the HUB is a “global strategic partnership where people can rent work space or just share ideas from wherever they are in the world. It is not an incubator but a community where like-minded change makers reach out to each other.” 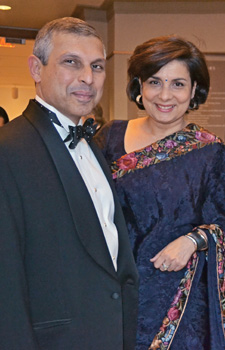 It adds: “We are the only space to bring together people making change regardless of industry. Members work at the HUB Singapore, attend and produce events, access funding and mentorship, source co-conspirators, find social networks, and launch companies.”

“So far, 4,200 ‘rock stars’ of social entrepreneurship are having fun and being inspired by each other,” Mirpuri said. “The HUB is growing into a global workplace where change makers kick-start their ideas and don’t feel lonely anymore.”

She credits her early success with the Learning Farm and the HUB to the seven-year experience she had working in change management for Burson-Marsteller, a leading global PR and communications firm, and setting up the Corporate Communications Department for Jones Lang Wootton.

Mirpuri, who holds a master’s in linguistics from the National University of Singapore, has also been busy writing columns and books and translating. She wrote a handsome salute to individual Indonesians playing a positive role helping the environment called “Indonesian Eco Heroes.” And with Cindy Saja’s illustrations, she produced “40 Green Tips,” which features environmental ideas for children that were originally published in her regular column in the Jakarta Post. The witty series of cartoons is still used in schools and organizations throughout Indonesia and abroad and led to an invitation for her to speak at the Technology, Entertainment and Design (TED) forum in Indonesia in 2012.

She also translated “The Jungle School” by Butet Manurung, an award-winning educator. This book chronicles the first year Manurung spent living with the Orang Rimba tribe on the Indonesian island of Sumatra.

Gouri Mirpuri is happy to be in Washington, D.C., but she admits it can get lonely with the family spread out over three continents. “It’s painful,” she said, admitting that Skype doesn’t make up for the physical separation. 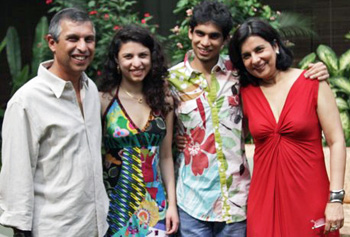 Gouri Mirpuri, right, and her husband, Singaporean Ambassador Ashok Kumar Mirpuri, stand with their two children: daughter Nikisham, 24, a lawyer in Singapore, and Nihal, 20, a computer engineering student at the University of Melbourne in Australia.

Their 24-year-old daughter Nikisha is a lawyer in Singapore, while their 20-year-old son Nihal is studying computer engineering in Australia at the University of Melbourne. “That’s 30 hours away,” this long-distance mom pointed out, looking melancholy.

With Skype calls to family and colleagues all over the world and nonstop e-mails from her thriving nonprofits, Mirpuri has her hands full. However, she is looking to make a contribution and a difference during her next three years in Washington as an ambassador’s spouse.

“The demands of this job are huge and each time you go to a new post, you have to set the needle back to zero and start all over again. For the ambassadors, they just go from office to office but we have to start all over each time we move,” she told us.

“Some people think it is glamorous but it is also lonely, tiring, challenging. But I love it.”

She added: “My life is like Chinese checkers, where you take one step and you never know where that’s going to lead you. I try to think about what I could do today and what I could do tomorrow, not what I used to do or be.”