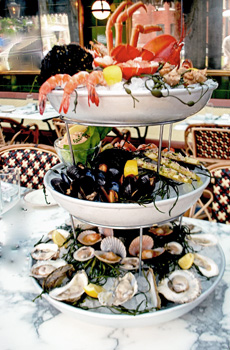 Philadelphia’s prolific and eclectic restaurateur Stephen Starr opened his first D.C. location recently in an old dry cleaner’s building on 14th Street in Logan Circle. It has been fascinating to watch the transformation from impersonal industrial to cozy French bistro over the past several months — a credit to Starr’s instincts and imagination. In fact, he only decided what kind of restaurant he would open after he had found the empty space while touring Washington.

The decision seems to have paid off: Le Diplomate is generating buzz and business as a Parisian haven in Washington, D.C.

Starr turned to Shawn Hausman, who’s designed the interiors of several of his other restaurants, to bring his vision for Le Diplomate to life. Hausman and colleague Jessica Kimberley scoured France for artifacts and have brought together a pleasing assemblage of pieces that recreate the feel of an authentic French bistro, notably the large zinc bar. Even the floor is authentic. The designers worked with a New York firm specializing in reclaimed flooring to recreate a hardwood floor they saw in a bistro in Paris, complete with the squeaks. The color palette of red, gold and medium wood lends a warm and cozy feel to the fairly large space. In sharp contrast, the alfresco atrium off the dining room, with a tiled green main wall and full-length glass window leading to the outside dining area, is almost like eating in a green house.

The newest of Starr’s 30 or so other restaurants spread throughout Philadelphia, New York, Atlantic City and Fort Lauderdale, Le Diplomate is one of only two French establishments in the group. The other, Parc restaurant in Philadelphia’s Rittenhouse Square, is clearly a strong influence, though Starr has modified his vision to fit local tastes. Le Diplomate’s menu offers classic French bistro cuisine, and Washingtonians may be struck by its similarity to Bistrot du Coin in Dupont Circle and Mon Ami Gabi in Bethesda, Md. But after the first bite, what really strikes you is just how exceptional this seemingly typical bistro fare is.

After an intensive search for his top man, Starr selected Adam Schop to lead Le Diplomate’s kitchen, passing over several French chefs in the process. A newcomer to D.C. dining, Schop is noted for his work at the pan-Latin Nuela in New York for which he earned the New York Rising Star award in 2011. His previous work at Zinc Bistro in Scottsdale, Ariz., gave him the opportunity to develop French skills that he first learned at the Culinary Institute of America.

Schop’s treatment of the starters is admirable. The mushroom tart is a rich delight, with a round, flaky crust, pioppini mushrooms, truffles and pecorino cheese. The tuna carpaccio arrives deceptively looking like a bowl of pink soup. A full plate of seamless, tender, not-quite-paper-thin tuna is very lightly seasoned with a leek vinaigrette for a dish that is both delectable and intriguing. For a heartier flavor, try the plump ricotta ravioli nestled under an intense plum tomato and basil sauce in a small but agreeable dish. 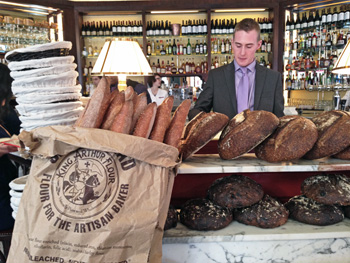 The veal escalope — served with a rich morel cream, garlicky braised ramps and al dente asparagus — is superb. One has to wonder what will happen when ramps are out of season as they are a key part of what gives the dish its unusually intense and full flavor.

One of the more unusual creations, the skate grenobloise, is arguably one of the best. A thick slice of skate wing is pan fried until a tender crust forms, then seasoned with lemon, caper and beurre noisette. It is stunning in its simplicity. A classic, the steak au poivre, asserts itself with an intense cognac demi glace that effectively complements the coarsely crushed black pepper crust. A sizable portion of buttery garlic spinach is a harmonious side, but it’s the nice basket of thin, crisp frites that complete the dish.

A special daily menu also mixes it up with rotating items such as lavender roast duck, lobster risotto, pork Milanese, rabbit en gibelotte, bouillabaisse, Dover sole meunière, and veal sweetbreads. It is a good way to guarantee return visits, as one wants to sample all these delicacies. In recent visits, the sole and the rabbit have been exceptional.

Unlike some French bistros, dessert at Le Diplomate is not an afterthought. Pastry chef Naomi Gallego’s desserts demonstrate the same mastery of technique and creativity as the rest of the menu.

For instance, the milk chocolate pot de crème is smooth as silk and rich as a Cadbury bar. But the star of the menu (at least for chocolate lovers) is the dark chocolate napoléon. A beautiful concoction of almond dacquoise, chocolate mousse, bitter chocolate ice cream and caramel jam, it is intensely chocolate without being overwhelming. On the lighter side, the grapefruit coupe glacée is a refreshing combination of tart grapefruit sorbet, petits financiers (tiny almond flour cakes), cinnamon cream and red grapefruit compote. The combination of grapefruit and cinnamon flavors is a particularly unusual touch. 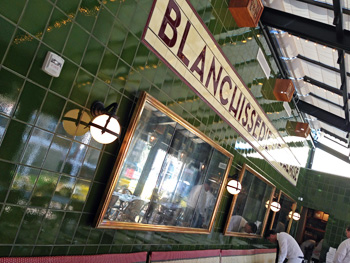 Le Diplomate’s take on the ubiquitous cocktail menu is lighter than most, featuring creations like the Joséphine — a concoction of Bugey wine, Byrrh apéritif, crème de pêche, Stolichnaya vodka and strawberries over ice — and the sparkling wine-based Pamplemousse Pressé, both perfect summertime drinks. Meanwhile, the substantial and rather pricey wine list at Le Diplomate is a balanced collection of French and international labels. Beers are a better bargain, with a respectable selection of bottles and several varieties on tap.

Le Diplomate has brought another Philadelphia original to the area, coffee from La Colombe Torrefaction (which plans to open a café in D.C. before the end of the year). The internationally renowned coffee-roasting company makes a perfect end to the meal and offers an extra incentive to stop by on a weekend morning for a quick cup along with some excellent treats turned out by the in-house bakery. The evening bread baskets alone are also a worthy sample of the kitchen’s talents.

Judging by the crowds at Le Diplomate virtually any night of the week, Starr probably has his answer as to whether his particular approach will work in the D.C. market. It is exciting to consider what empty space might catch his eye next, and what it will suggest to his fertile imagination.