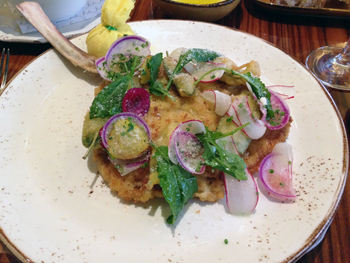 The arrival of the December holiday season has us thinking about leisurely lunches that allow us to unwind with friends and colleagues in cozy settings with delicious food and ambience to spare.

There are plenty of these types of restaurants scattered across Washington, from Georgetown to Dupont Circle to Penn Quarter and beyond. As the chill of autumn set in, we visited three such establishments to see how they measured up at lunchtime. Two of our choices are relatively new or have recently been reborn on the D.C. dining scene, while the third is a well-established eatery that we hadn’t visited in several years.

For our first mid-day meal we visited Fiola, chef Fabio Trabocchi’s exquisite ristorante in Penn Quarter. Fiola has earned a slew of accolades since opening in 2011, including a coveted “best restaurant” in D.C. honor from Zagat this year. During our lunch in Fiola’s sleek but warm and inviting dining room, the hosannas seemed entirely deserved.

The veal Milanese at Fiola, a rare treat in American restaurants, features parmesan and an assortment of fall greens, pickled red onion and citrus vinaigrette.

Fiola’s lunch menu allows its diners to be as decadent or restrained as the mood fits. The Maria Menu, featuring two courses and a light dessert for $28, is a particularly nice touch for those who might be calorie conscious or reluctant to break the bank for a midweek lunch. As we perused Fiola’s traditional lunch listings, an amuse-bouche of smoked salmon and grapefruit arrived at the table. The delectable bite — a mouth-watering combination of salty and tangy-sweet — proved the perfect palate opener.

The lobster bisque cappuccino, known as “soup” to the American layman diner, was densely packed with Nova Scotia lobster chunks, mussels, oysters, smoked salmon and salsify, a root vegetable similar to a long, thin parsnip. This starter was a hearty and delicious autumn comfort food, beautifully presented with an intensely fresh, flavorful and warm golden broth.

Next, we had several slices of the sashimi of hamachi. The delicate yellowtail fish was accompanied with baby artichokes, pickled ginger, delicately shaved daikon radishes and yuzu vinaigrette. Incredibly tender and almost buttery in texture with an interesting citrusy kick from the yuzu, the sashimi was another flawless appetizer.

Moving on to the main courses, we decided on a pasta dish; this is an Italian eatery that makes its own versions daily, after all. We also chose the classic veal Milanese, which is difficult to find in American restaurants. In fact, our amiable server said Fiola is the only restaurant in the city that prepares it.

The hand-cut pappardelle pasta with ham hock ragu, forest mushrooms, Merlino cheese and prosciutto de parma was tender with a robust, earthy flavor. The warm pasta boasted a fresh-as-advertised flavor and, again, seemed a solid choice for warming the bones on a chilly day.

The veal Milanese with parmesan and an assortment of fall greens, pickled red onion and citrus vinaigrette was yet another superlative experience. Bountiful and beautiful on the plate with the bone-in and a light, golden-fried texture, the pounded veal was crispy, tender and mouth-wateringly delicious. Small, lightly fried sage beignets added an amusing and surprisingly flavorful punctuation mark, while the side salad helped to lighten the overall dish.

After the robust meal and with a few hours of work still waiting back at the office, we were grateful for Fiola’s extensive coffee menu. The restaurant prepares and pours many of the hot, caffeinated beverages tableside in silver urns, making for an impressively elegant finish to a leisurely lunch. We had a stout and flavorful cup of cappuccino, as well as an affogato, hot espresso poured over vanilla gelato.

Fiola was outstanding from start to finish — from the sexy, understated ambience; to the attentive yet never obtrusive service; to the supremely flavorful food and rich, warm and delicious coffee finish. Bravo.

The first thing you’ll probably notice upon entering the dining room at Iron Gate — a beautifully understated Mediterranean restaurant in a converted residential property on a tree-lined street near Dupont Circle — is the woody aroma of a burning fireplace.

There are two fires in the low-lit, romantic dining room: a wood-fire stove in the kitchen and the actual fireplace in the center of the room. The ambience of Iron Gate’s exposed wood beams and rust-colored leather banquettes, coupled with an expertly curated menu of small plates, makes a satisfying setting for a relaxing, extended holiday season lunch.

Like many Mediterranean restaurants these days, Iron Gate serves up mostly small plates with a few entrée-size selections. We stuck with the smaller plates to allow us to sample more of the flavors emanating from chef Tony Chittum’s kitchen, recently renovated and reopened after a period of three years in which it was closed. We’re glad we did. 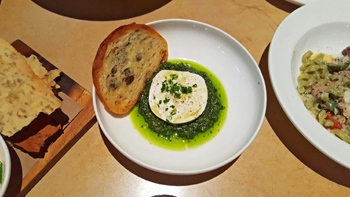 At Iron Gate, imported burrata, a fresh Italian cheese made from mozzarella and cream, is served in a pool of gleaming green salsa verde.

The curried cauliflower soup with grapes, almond slices and caper was nothing short of gorgeous to behold. Pale yellow with green grape halves glistening like jewels in the savory broth, the soup’s flavor was outstanding. The combination of grapes and nuts made the dish simultaneously sweet and earthy, while the caper added a dash of salty flavor. We were off to a very good start.

Egg and dill gemelli pasta served with delicately braised rabbit was a bit overly salty, most likely because of the two varieties of olives served as part of the dish. But the feta and roasted pepper dip with scallions served with house-made fennel seed crackers could be added to the federal government’s list of addictive controlled substances. Tart and creamy with an appealing pinkish hue, we couldn’t get enough of this dish but resisted a second order.

Imported burrata, a fresh Italian cheese made from mozzarella and cream, served in a pool of gleaming green salsa verde with anchovy and garlic ciabatta bread was another stunner. The freshness of the dish practically popped off the plate and had us struggling with restraint once again.

Not to be redundant, but the maple-roasted squash with pomegranate, house-made yogurt and spiced seeds was also marvelous. Chittum’s decision to combine the sweetness of maple with the tart punch of pomegranate dropped into a cool, tangy bed of yogurt is nothing short of culinary genius. At this point, it won’t surprise you to learn that the chicken kalamaki wrapped in Virginia ham and charred onions was similarly delicious. Roasted grapes inject a sweet offset to the hearty flavor of the chicken and ham in this dish. Yet another winner.

Iron Gate is now officially one of our very favorite D.C. restaurants and a primo spot for lunch.

The final stop on The Washington Diplomat’s tour of upscale, relaxing lunch spots in the District of Columbia took us to the Tabard Inn, one of the city’s old standbys for brunch and leisurely lunches. 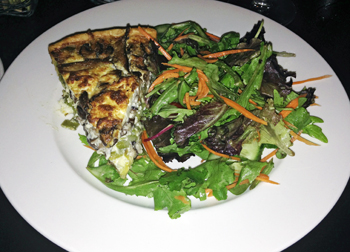 While we’ve enjoyed evening cocktails in the old hotel’s Victorian sitting room, we found the Tabard Inn’s dining room neither relaxing nor particularly enjoyable. Although the food was better than decent, the dining room was dim and cramped with inattentive service, tired décor and noise levels that approached a dull roar. As we waited for our table, we gave the forgetful bartender our order three different times before he actually delivered the drinks. Not a good start.

More unfortunately, I couldn’t shake the image of a mousetrap — thankfully empty — stashed clumsily underneath the banquette where we were seated. Restaurants, especially those in old buildings in D.C., commonly contend with mice, but patrons certainly don’t want to be reminded of it. Yuck.

Despite this inauspicious start we soldiered on, skimming the Tabard Inn’s eclectic-to-the-point-of-confounding brunch menu. Huevos rancheros or seafood gumbo? Pumpkin French toast or a chicken Caesar salad? I went with a regular Caesar salad with anchovies to start and a burger made with a half pound of Angus beef, applewood smoked bacon, crispy onion straws and aged cheddar cheese. The salad was ho-hum and a bit overdressed with creamy dressing, but fresh. The anchovies saved the day. The burger, however, was very good. Perfectly cooked and juicy with an appealing combination of flavors, I was impressed — and barely able to finish it.

My dining companion ordered the “savory tart,” a generously proportioned pie full of mushrooms, leeks, asparagus, goat cheese and mixed greens. Cheesy and rich, the flavorful tart made a good choice for fall/winter dining because of its stick-to-your-ribs denseness.

We’ll give the Tabard Inn points for offering affordable, mostly well-prepared food. But unfortunately, the cramped quarters and yawning service had us yearning to leave, which we did as soon as we were able. On a slower day, one may well find the Tabard Inn’s ambience more appealing. But if you’re looking to impress a friend, family member or colleague over a long holiday lunch this month, we’d recommend Fiola or Iron Gate without hesitation.