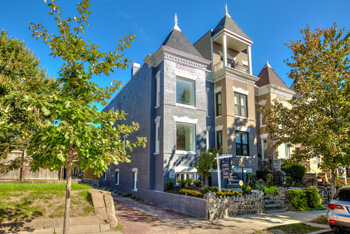 The Washington metropolitan area is a hopping real estate market. Even when the nation’s economy tanked in recent years, along with home prices, analysts say the region emerged relatively unscathed, compared to other big-city markets, thanks in part to the fact that the U.S. government, the biggest employer in these parts, never goes out of business.

New statistics from real estate giant TTR Sotheby’s International Realty show that the D.C. residential market continues to chug along at an impressive clip. The total sold dollar volume here increased 7.3 percent and the median sold price increased 4.6 percent during the third quarter of 2015. Fairfax County, Va., leads the region in overall sales, which rose by 12.5 percent to $6.4 billion through September.

Even in this relatively durable market, however, there were some fluctuations. The historic D.C. neighborhood of Georgetown saw a dip in sales of 4.3 percent, with homes sitting on the market longer. But other places saw big movement, including up-and-coming Logan Circle, with the average number of days that properties sat on the market decreasing steadily. The picture was more mixed for places like Maryland’s affluent Montgomery County and Alexandria, Va., where sales increased but, conversely, homes were slower to offload.

We talked with Mark Lowham, managing partner at Sotheby’s, about how real estate in this area compares to other metropolises, how it’s evolved and where it’s going.

The Washington Diplomat: How has the real estate market in this area changed in the past five to 10 years?

Mark Lowham: In general, we’re experiencing a continued renaissance and new energy in the Washington, D.C., proper market. There were portions of Washington which have always been vibrant — Northwest D.C., places like Georgetown and Kalorama, American University Park. 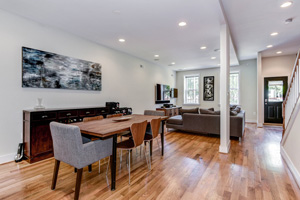 TWD: What are some of the hottest spots to live in the D.C. metro area?

Lowham: Logan Circle is a great example I think of how the D.C. market is changing. That submarket has taken off and now today has probably the lowest days on the market for new listings … than any other submarket in the region. Things sell usually in days and usually with multiple offers. Certainly 10 years ago that wasn’t a submarket that was on anyone’s radar. Five years ago it was starting, but today it’s one of the most vibrant submarkets in the region. And then you can just track that to the east to Shaw, as an example, which is quickly catching up to Logan Circle — very vibrant, lots of energy and lots of excitement about people moving into that submarket — and then it goes beyond that into Petworth, into Bloomingdale.

TWD: D.C. seems like a pretty transient area. Is that a misconception?

Lowham: I don’t think Washington is any more transient than other major American cities. I think the misconception is people move here and then move out. People tend to move here and then just stay. They may move because of lifestyle choices, so someone may get married and need more space or have a family and decide they’re going to take a look at schools, but they’re staying within the region, regardless of the ebb and flow of the administrations or the political landscape.

TWD: What’s the average cost of a single-family home and of an apartment here?

Lowham: We really need to be more specific when we talk about an average because the Washington metropolitan area has a huge range of submarkets for both single-family homes and multifamily homes. The average sold price for a single-family home in Georgetown is $1.9 million, so that’s one very specific submarket. But then you can go into what I think are still incredibly vibrant and emerging neighborhoods like Logan Circle and the average is closer to $1.1 million. [In] Arlington, for example — again, really vibrant market — the average is about $850,000. 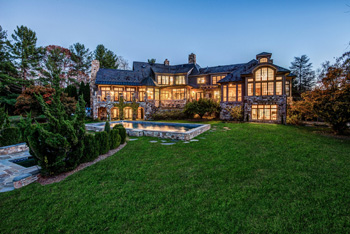 The residence at 626 Philip Digges in McLean, Va., is under the Sotheby’s portfolio.

One thing that’s emerging, which is not a surprise, is people are increasingly interested in being located in close proximity to good transportation infrastructure and to amenity bases that allow them to be less dependent on their cars…. Markets like Arlington, Old Town Alexandria, Vienna, Va., in terms of Northern Virginia are doing very, very well, because they have access to good transportation infrastructure and those are communities where you can be clearly independent of a car. Submarkets on the other end like Potomac, Md., for example, which is a beautiful community — large homes on large parcels — but very dependent on access by car, those markets right now are not performing as well as some of the others.

TWD: How do prices here compare to other parts of the country?

Lowham: We want to look at New York, San Francisco, Dallas, Los Angeles, Atlanta and in particular we want to look at Los Angeles, New York and Boston as our most comparable submarkets. The Washington metropolitan area in general remains a really tremendous value compared to those other metropolitan areas. Prices for single-family homes and multifamily homes in those other markets … on average are significantly higher than they are in the Washington metropolitan area. So Washington is, compared to those markets, a tremendous value, and it becomes even more profound when you look at Washington compared to other global capitals — places like London, Paris, Shanghai, Hong Kong, Tokyo.

TWD: What about in terms of real estate growth?

Lowham: I think that there is some pent-up demand for the condominium product for the multifamily sector, so we’re going to see some more for-sale product entering into the market over the next several years.

The other reason for that is increasingly as Washington continues to show up on the radar screens of the global investor, a great product for a global investor is a condominium because they can buy it, they don’t have to worry about the maintenance, it’s easy to rent. 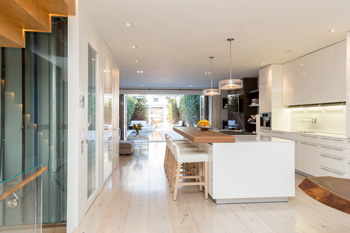 The property for sale at 3245 N St., NW, sits in the heart of Georgetown, which overall in 2015 didn’t fare as well as up-and-coming D.C. neighborhoods like Logan Circle did.

That I think goes back to my point about how Washington is a good value. Per square foot here compared to London is about 40 percent of the cost of comparable product in London. If you’re a global citizen who moves freely among countries and markets, Washington is increasingly showing up as a great opportunity.

Lowham: It’s notable to us in 2015 the energy and the activity [of downtown D.C. markets] like Logan Circle, Shaw. I think that we have been surprised at the other end at the lack of energy in the upper brackets, particularly in Montgomery County and Northern Virginia, where there are magnificent homes that are available at well below their replacement costs. In places like Great Falls, Va., and Potomac, Md., where you can buy a house for much less than it would cost to duplicate, the days on the market continue to increase. In both of those cases, I think transportation plays a role. But also … I think the government contracting sector is being very cautious in 2015, particularly on the heels of sequestration and budget cuts that happened at the end of 2013. The people who own and operate those companies are being cautious, so I think that put a little downward pressure on the market.

Lowham: Where the upper brackets were quiet in 2015, I think we’re starting to sense that some of the people standing on the sidelines are going to step forward and we will see more sales, much more activity in the upper brackets than we saw in 2015. I think we’ll see continued strength and momentum in the downtown Washington market that will continue to push further east. Markets like Old Town Alexandria will continue to be strong because that’s a walkable community with reasonable access to Metro and Washington Reagan National Airport.