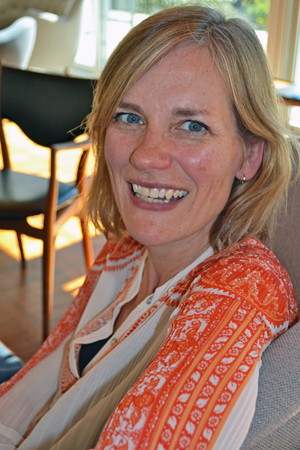 Ulla Rønberg, wife of recently appointed Danish Ambassador Lars Gert Lose, has spent her career promoting cultural diplomacy long before the term came into vogue. Although she’s on a leave of absence from the Danish Agency for Culture while in D.C., Rønberg is finding ways to incorporate her love of culture with her new role as an ambassador’s spouse.

“[Cultural diplomacy] is an area where arts and culture can both pave the way for development in the arts and point at new solutions in societal issues,” she told us. “Cultural doors open political doors.”

For the past three years, Rønberg was the project leader of international cultural exchange projects at the Danish Agency for Culture, which employs roughly 300 people and aims to promote Danish arts both at home and abroad. Her portfolio included Asian countries such as South Korea and Vietnam, and her most ambitious undertaking was a yearlong showcase in China that featured more than 60 individual projects covering the arts, music, film, literature, theater, design, architecture, learning programs and even a Viking exhibit. She made six trips to China to coordinate the 12-month calendar.

In addition, she oversaw the approval and funding of cultural exchange programs between Denmark and the United States. “In the States, we work to establish partnerships and new opportunities for Danish artists and cultural institutions. Often, the connections already exist, as there is a well-established dialogue between the American and Danish artist milieus. We work to make these connections stronger and broader,” she explained.

Today, from her perch in Washington, Rønberg is always on the lookout to expand these connections. “In Washington, there is great potential for collaboration between museums. Danish museums are well aware of this and are looking closely at possibilities for new American partnerships.”

Rønberg has extensive experience working with museums. She was curator and head of audiences and development for the Hirschsprung Collection in Copenhagen, as well as curator and head of education for the KØS Museum of Art in Public Spaces. Prior to that, she was an editor with the Université Paris-Sorbonne.

Rønberg studied art history at the University of Warwick in Britain and journalism at the Danish School of Media and Journalism before earning her master’s degree in art history and Scandinavian literature at Aarhus University.

Rønberg said her interest in art was piqued by her mother. “My mother was an art teacher and specialized in clay. We were three kids so she practiced on us.”

Rønberg takes after her mother in another respect: She too has three children. Björn, 15, and Ellen, 12, both attend the Field School in D.C., while Siw, 4, is in pre-school at the British School of Washington.

“We walk through the woods to the British School; it’s only 10 minutes away,” Rønberg said of the residence, a modern complex that abuts Rock Creek Park and doubles as the country’s embassy.

The Danish Chancellery is, in fact, the first modern embassy built in the United States — constructed in 1960 to pay homage to Denmark’s spirit of innovation and transparency. The entrance hall of the residence portion emphasizes the country’s openness with white marble shipped in from Greenland, expansive windows that flood the space with natural light, clean lines and a stately but understated aesthetic.

Like her predecessors, Rønberg has added her own personal touches to the residence, including contemporary canvases and examples of award-winning Danish furnishings. “We would like to have modern, more contemporary art that reflects the architecture of this beautiful building and Denmark,” she said. “This setting is the perfect showroom for Danish art and design.”

Danish fiber artist Grethe Wittrock, who recycles weather-beaten boat sails, is creating a two-floor art installation that will hang in the entrance from the reception rooms upstairs down to the lower level where the ebony baby grand piano used to be.

“We moved the piano so that we could have concerts here in the library — and Ellen and I could play it more often,” Rønberg explained, pointing to a nearby guitar. “As you can see, my husband plays the electric guitar. He used to be in a heavy rock band and have long hair.

“We’ve known each other since high school,” she added, “but I didn’t pay attention until he cut his hair.” 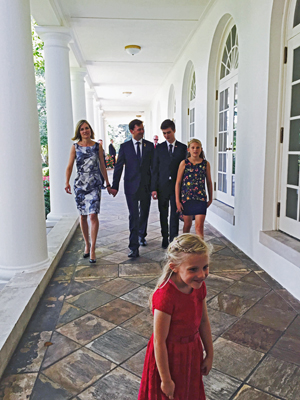 The ambassador has come a long way since his days of wild hair and heavy metal. Prior to coming to Washington earlier this year, Lars Gert Lose was Denmark’s permanent undersecretary of state, serving as chief foreign affairs advisor to the prime minister. He began his diplomatic career in 1997 as head of section in the European Union Coordination Office and has since held high-level positions such as head of the Foreign Minister’s Office.

Rønberg also began her career in 1997, writing articles in magazines, newspapers and web sites. She became head of education at the ARKEN Museum of Modern Art in Copenhagen, designing exhibits and educational strategies for children and young people. During Lose’s posting in Paris, she helped develop digital educational material for students studying Danish at the Sorbonne.

In addition to her educational and cultural work, Rønberg has often been responsible for fundraising and budgets during her museum stints. While with the Danish Agency for Culture, her job included tailoring programs to fit the cultural scenes of different partner countries and adhering to a bottom-up approach that set the stage for a cross-cultural dialogue and long-term exposure for Denmark. The “Danish Cultural Season in China,” for example,

“In Denmark, women work and have careers,” Rønberg said. “We want to achieve ‘work-life’ balance — and husbands are a great part of this deal. We take this for granted. In our family, the children’s grandparents have played a big role in helping out. They have made all the difference. Plus, parents are entitled to one-year maternity leave.”

In addition to gender equality and generous child-care benefits, Denmark consistently ranks at the top of many happiness and well-being surveys and is a pioneer in achieving a “work-life” balance in other areas such as commuting.

“We are a biking culture. Early morning in Copenhagen, you see people riding their bikes to work — often dressed in colorful Spandex. An hour later, they are all in suits,” Rønberg said. “In every modern workplace, they have showers but it isn’t just about having showers. It is a way of thinking that includes room for bikes on the road, safe bike storage and an understanding that you have to sacrifice something to achieve a goal like more bikes in the city.

“Denmark is innovative, green and all about sustainability. That includes all layers in society: how we eat, what we wear, in the arts and crafts. We have solar panels even in our houses,” she added.

Now, Rønberg is adjusting to the American way of life and Washington diplomacy specifically. Her philosophy on running an official residence is to create not only a functional, representative symbol of her homeland, but also a comfortable haven for her family.

“We live diplomatic life very intensely as the residence is our home and at the same time the official building for dinners and receptions. It can be a challenge with three kids and a dog in the house. So we have an ‘open house policy’ where the kids are welcome to come down and have a soda and some hors d’oeuvres at all times. We can’t live here with the doors shut because this residence is also our home. We live here 24 hours a day.”

And while Rønberg is excited to imbue the residence with the cultural flourishes she has spent her career honing and developing, she is also enjoying the cozier side of life in D.C. “We have the most wonderful view of the park — silence at night except for the sound of the animals.”