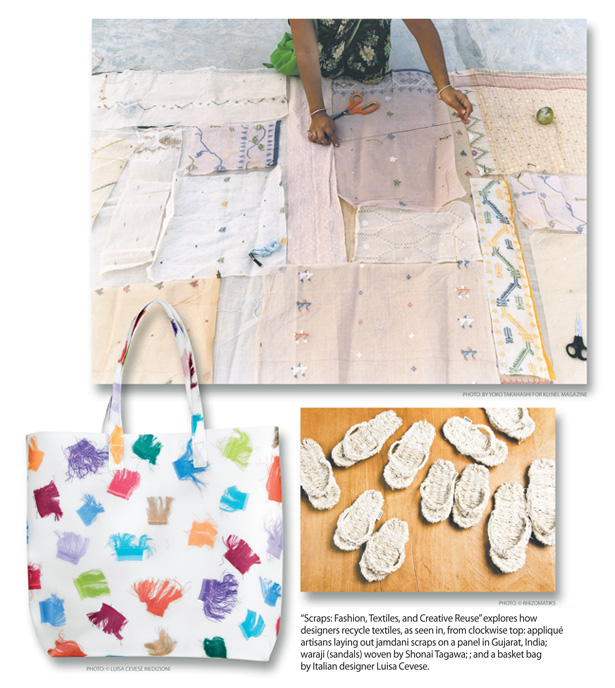 In an age of “fast fashion” brands like Zara and H&M, clothing has become disposable, and the mere idea of sewing a button back on or stitching up a ripped blouse is now an archaic concept. But those cheap T-shirts and bargain-basement jeans apparently aren’t a good look for the environment.

Today’s overconsumption has contributed to making the $2 trillion clothing industry the world’s second-largest industrial polluter — right behind big oil. D.C. is shining a spotlight on recent strides to make the apparel industry more sustainable with several events this fall, including the “Scraps: Fashion, Textiles, and Creative Reuse” at the Textile Museum.

“‘Scraps’ reveals the environmental impact of the global fashion industry and offers creative solutions by leading designers who are dedicated to reducing waste,” said John Wetenhall, director of the George Washington University Museum and the Textile Museum.

The exhibition, which takes up roughly one floor of the museum, is easily accessible with a little more than 40 works on display, featuring three designers: Luisa Cevese, founder of the Milan-based design studio Riedizioni; Christina Kim, founder of the Los Angeles-based brand Dosa; and Reiko Sudo, co-founder of the Tokyo textile design firm Nuno. The artists zero in on different points of waste in the production chain, using scraps and cast-offs to create one-of-a-kind textiles in an effort to make the industry eco-friendlier.

“Textiles used to be precious. You didn’t just toss away a piece of cloth — you would mend it,” said Camille Ann Brewer, curator of contemporary art at the museum.

Today, however, many people treat clothes as a disposable luxury. Roughly 20 pieces of clothing are manufactured per person each year, according to the World Resources Institute (WRI). In fact, the average consumer bought 60 percent more clothing in 2014 than in 2000, but kept each garment half as long.

The result is greater water stress and pollution caused in part by the cultivation of cotton, the most common natural fiber used in clothes. As Deborah Drew and Genevieve Yehounme point out in a July 5 WRI blog post, “Cotton is also a very thirsty crop, requiring 2,700 liters of water — what one person drinks in two and a half years — to make one cotton shirt.”

Meanwhile, even the production of synthetic fibers like polyester carries a heavy carbon footprint because of the greenhouse gas emissions emitted by the production process. Synthetic clothing also takes hundreds of years to decompose. This problem is only set to grow as the world’s middle class continues to expand and the demand for clothes increases.

While more than 15 million tons of used textile waste is generated per year in the United States alone — from yarn to dying to quality control — nearly all textiles and clothing are recyclable. But most Americans don’t recycle their clothing, even though the benefits to the environment are tremendous. The recycling of 2 million tons of clothing per year would be equivalent to taking 1 million cars off U.S. streets, according to Rick LeBlanc, who wrote about textile facts and figures for The Balance website on Jan. 31.

The necessity and beauty of recycled textiles is exactly what the designers in “Scraps” set out to prove in a variety of creative ways. 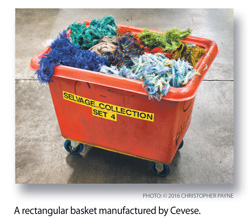 When one looks at Reiko Sudo’s work, the soft periwinkles and grays of her silk panels bring hygge — the Danish word for coziness and comfort — to mind. She works with the city of Tsuruoka in northern Japan to explore possible uses for discarded silk. Her focus is on kibiso, the rough outermost layer of the silk cocoon protecting the precious delicate silk underneath, and ogarami choshi, the silk thread that remains on the production machine and must usually be cut away. Sudo reworks the kibiso into finer yarn for machine weaving.

The exhibit has several trays of cocoons on display that museum-goers can examine. It’s worth visualizing that it takes 1,700 to 2,000 silkworm cocoons to produce just one silk dress, and Sudo’s work uses every last thread of each cocoon. Also on display are sandals woven out of the rough kibiso and accompanying videos to illustrate the process of salvaging silk waste and transforming it into innovative new creations.

“I love waste” is the mantra of designer Luisa Cevese, who previously headed research at an Italian silk-weaving center in Como. Beyond the simple utility of waste, Cevese is also attracted to the visual appeal of certain leftovers from the textile industry. Her work — which features everything from handbags that can be found on sale at the museum’s gift shop to gold and silver placemats — stands out for its use of tufted colorful scraps embedded into polyurethane. Each product in Cevese’s line is different because of the diversity of scraps she collects.

The clothing industry has also received a lot of criticism for its dubious labor practices abroad, especially with more than 99 percent of clothing and footwear sold in the U.S. produced overseas. South Korean-born Christina Kim believes in cherishing the old-fashioned craftsmanship used to create clothes and developing long-term relationships with local artisans in India to produce her collections.

“It’s not just thinking about the natural resources, but the human resources,” Kim said in a 2009 interview with the Los Angeles Times. “That’s probably the biggest thing you give … that you’re not just looking at them as tools, you’re looking at them on a human level.”

Kim’s ethereal collection includes dainty peasant blouses and dresses all recycled from jamdani saris traditionally worn in India, and Bangladesh. Each collection of clothing featured in a season by her fashion line gets recycled into the next season’s designs and scraps are used to make things like traditional healing amulets — tricks of the trade she learned during her travels to Oaxaca, Mexico.

“Scraps” will also feature various programs, including a film and panel discussion on fashion and sustainability; workshops on mending and scraps patchwork; and conversations with designers Sudo and Kim.