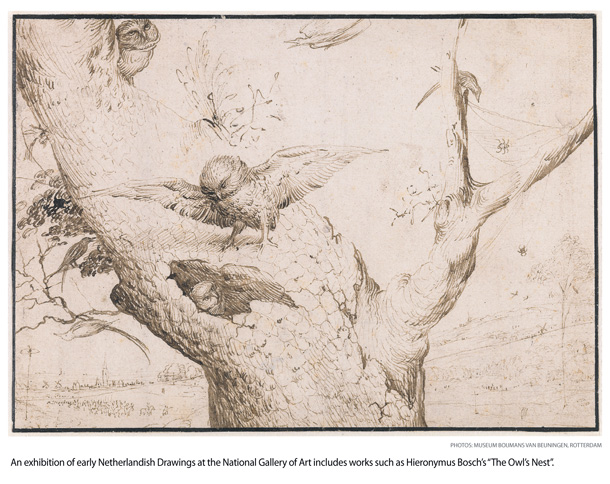 You’ll want to pick up one of the National Gallery of Art’s provided magnifying glasses to study the mysterious, intricate details found in its exhibition on early Netherlandish drawings.

At “Bosch to Bloemaert: Early Netherlandish Drawings from the Museum Boijmans Van Beuningen, Rotterdam,” it is the unknown aspects of the images that stay with viewers, from the artists’ use of hidden meanings to the fables depicted that are lost to history. The drawings are full of fascinating minutiae and different styles to pore over, with subjects as varied as fantasy worlds and rolling farmlands.

Featuring works from Rotterdam’s Museum Boijmans Van Beuningen — home to one of the world’s finest collections of 15th- and 16th-century Netherlandish drawings — this show offers an “amazing opportunity” for those in the United States to see such a comprehensive display, said Stacey Sell, associate curator of old master drawings at the National Gallery of Art (NGA).

“There are not many good collections of Netherlandish drawings in this country, and it’s not as widely collected,” Sell told The Washington Diplomat.

In particular, 15th-century Netherlandish drawings are “so rare,” she said, and the NGA does not have many in its permanent collection. The Boijmans approached the NGA about the exhibition, which was shown there and in Paris before coming to D.C. 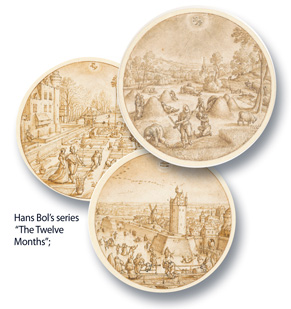 The drawings — depicting landscapes, portraits, biblical scenes, mythology and other themes — were varied in their purpose, with some serving as studies for paintings, prints or glass design, and others seen simply as works of art in their own right. Don’t miss the gems from Hieronymus Bosch at the start of the exhibition, beginning with the double-sided “Spinster and Old Woman” — likely the earliest surviving drawing by him — and “Fox and Rooster” drawn years later on the back of the page.

His “The Owl’s Nest,” a pen-and-brown-ink drawing, absolutely demands the magnifying glass for the owls of the title and the countless intriguing details of spider webs, leaves, birds and the broad landscape behind them.

Pieter Bruegel the Elder’s pen-and-ink “Fortitude” also makes a splash as a depiction of frenzied violence and strange creatures. A design for his “Seven Virtues” suite of prints, the artist takes inspiration from Bosch’s famous fantastical figures in his wild scene. Its companion in the exhibition, “Charity,” is Sell’s single favorite drawing in the show — “but it keeps changing,” she noted.

Hans Bol’s series “The Twelve Months” is also a delight, featuring seasonal, pastoral activities in the round with each drawing topped, somewhat oddly, by a zodiac sign.

The exhibition traces shifts in time and style, with rooms dedicated to Bruegel and the rise of landscape as a genre; the growing interest in Mannerism and the use of classical literature and mythology; and the rise of naturalism, among other changes. In the pieces themselves, there’s a feeling of movement from precision to freer lines, with pen and ink with wash and some color entering the show as museumgoers head to the next century. 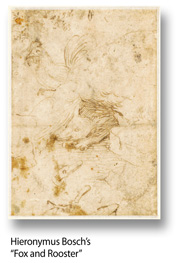 The theme of internationalism runs through the exhibition, with the key artists of the period beginning to travel more and more to Italy and the imperial courts of Prague and Vienna, Sell said. Take Hendrick Goltzius, for instance, who introduces more overt color into the drawings late in the exhibition and made drawings that were widely prized by collectors. From the influence of the classical and Renaissance works he saw during his journey through Italy to the impact of his fellow artists bringing back styles from their sojourns abroad, he created Mannerist engravings that made him internationally acclaimed in his time. At the NGA, visitors can see his drawings made with chalk in shades of only black, red and white.

The show concludes, as the name suggests, with Abraham Bloemaert and his chalk studies of figures, revealing a look at the process of an artist testing out different poses and body parts for future works.

As Sell noted, the inclusion of small magnifying glasses for visitors really “worked out” for a show that revels in such intricacies. Whether getting lost in the crosshatching and dots and dashes of Hieronymus Wierix or trying to decipher the lost meanings in Bosch’s works, the exhibition offers a multitude of rewards for those who take a closer look.

“The drawings are just so beautiful, and they are finished designs rather than rough compositional sketches,” Sell said. “They’re full of interesting details. As long as people take their time and really look, it’ll be rewarding, whether or not they know a lot about the time period.”