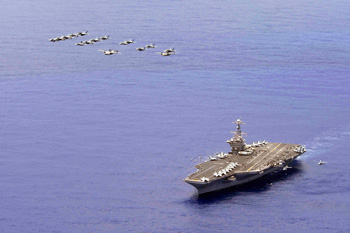 With Republicans now firmly in control of both houses of Congress, President Obama faces potentially bruising battles this year over everything from immigration policy to lifting the embargo against Cuba to battling the Islamic State. But on one issue — Obama’s goal of a “rebalancing” to the Asia-Pacific region — most Americans see eye to eye with the president, according to polls.

In fact, the Center for Strategic and International Studies (CSIS) says the so-called “Asia pivot” is perhaps the most bipartisan foreign policy issue in Washington. That may be the case, but from its outset in 2010, the pivot has been consistently derided and dismissed by critics who’ve questioned the president’s commitment to the region. Pressing global crises from Syria to Ukraine to Iran also seem to have conspired to relegate Asia to the sidelines.

But according to Obama, the pivot is still on course, as evidenced by his fiscal 2016 budget, which includes $585 billion for the Pentagon and $53 billion for the State Department. The president’s federal spending proposal calls the rebalancing to the Asia-Pacific region a priority, alongside “degrading and defeating” the Islamic State; countering Russian aggression; ensuring a smooth transition in Afghanistan; boosting cybersecurity; combating terrorism and extremism; and other security challenges.

The budget makes specific funding requests for immediate challenges such as training Iraqi and Syrian forces ($1.3 billion) and bolstering Ukraine’s weak government ($275 million). In contrast, the Asia-Pacific pivot is designed to be a long-term military, political and economic strategy, one that capitalizes on Beijing’s increasing assertiveness to improve ties with regional allies who are wary of Chinese hegemony.

The pivot is already boosting America’s military presence in the region, with a particular focus on maritime security, although any redeployment of resources is subject to potential budget cuts. Economically, it aligns the U.S. with one of the fastest-growing regions in the world, one that will continue to play an important role in the U.S. foreign policy agenda, whether it’s combating climate change or curbing North Korea’s nuclear ambitions.

For this reason, the White House and GOP lawmakers must work together to “chart a common course” on U.S. policy toward Asia over the next two years, urges a new report by CSIS called “Pivot 2.0: How the Administration and Congress Can Work Together to Sustain American Engagement in Asia to 2016.” That engagement, it says, should start with passage of the Trans-Pacific Partnership (TPP) by this summer. The trade pact would tear down tariffs and regulations to boost trade with a region that accounts for 40 percent of the world’s GDP and 26 percent of global trade.

“Most of us would agree that the most important thing the U.S. can do to cement our long-term engagement in the Asia-Pacific region is to complete negotiations for the Trans-Pacific Partnership,” said Michael J. Green, senior vice president of the Asia program at CSIS. “Our report recommends that the president follow up on statements he made in December that he was ready to move forward in spite of opposition from some of his own political base.”

According to Green, “TPP will be the defining element of the Obama administration’s Asia policy if we can get it done. [Senate Majority Leader Mitch] McConnell (R-Ky.) said this is one area where the White House and Congress can work together well.”

Green, speaking Jan. 5 at a CSIS event attended by about 200 people, outlined six key recommendations for the president to consider as he faces off against the GOP-dominated 114th Congress in the final two years of his administration. Besides trade, the report urges Obama to: 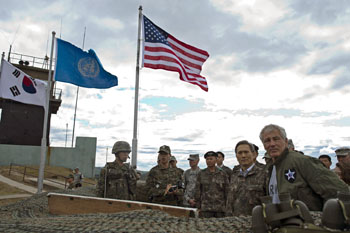 Green said a completed TPP, with 12 countries, would create the largest free-trade area in which the United States participates — far larger than the North American Free Trade Agreement encompassing the United States, Canada and Mexico — and that without the TPP, regional actors will view Obama’s pivot with skepticism.

“Unless you have a high-level, sustained case being made to the American public and Congress, you can’t get these things done. The window is narrow. An agreement has to be reached primarily with Japan,” he said, noting that the differences that remain involve relatively insignificantly areas. “On 95 percent of the TPP chapters with Japan, we have a common view.”

But the differences between Japan and the U.S., the two largest participants in the talks, are hardly trivial. Japan is reluctant to open up its heavily protected agricultural and automotive sectors (tariff on imported rice is nearly 800 percent), a key demand by Washington. Meanwhile, Democrats don’t see eye to eye with the president on the sweeping trade deal, arguing that it’s been hammered out in secret and would erode American jobs along with critical consumer and environmental protections.

Green pointed out that trade policy is an issue that divides Democrats but unites Republicans. For this reason, he says Obama must actively manage his party’s politics while cooperating with GOP majorities in Congress who will provide most of the votes. A realistic estimate is that it would take six months to get “fast-track authority” with a bill presented to Congress in late 2015.

Noticeably absent from the TPP talks is China, which is pushing its own competing trade pact and views the pivot in general as a thinly veiled attempt to contain its ascension — in its own backyard. Indeed, some critics say the beefed-up U.S. military presence in Asia is a disproportionate and provocative maneuver that will needlessly ratchet up tensions in the region. Despite the friction, experts on the CSIS panel said the U.S.-China relationship can be managed.

Green told his audience that “the prospects for a major breakthrough in U.S.-China relations are small, but there are some stabilizing elements in the relationship.”

“The deep economic interdependence between the United States and China has long served as an important shock absorber to keep the competitive elements in the relationship from tipping it over into conflict,” the CSIS report says. But it also warned that “both sides seem reluctant to truly embrace the avoidance of zero-sum approaches or the bent toward dividing Asia into discrete spheres of influence.”

Bonnie S. Glaser, who holds the Freeman Chair in China Studies at CSIS, said that while the symbiotic economic dependence between the two countries tends to define the relationship, Obama should continue to raise human rights concerns with Chinese President Xi Jinping.

Yet furthering the implementation of “conflict-avoidance mechanisms” must remain a priority in the military-to-military arena, she added. The Pentagon should also offer China incentives to engage in cooperative behaviors in the East and South China Seas — where six countries have overlapping territorial claims — while imposing costs for destablizing, coercive actions.

“The jury is still out as to whether we’ll see a reduction in some of China’s more provocative policies, with regard to territorial disputes,” Glaser said. “That’s what the U.S. is particularly concerned about. We don’t want to see China intimidate its neighbors.” 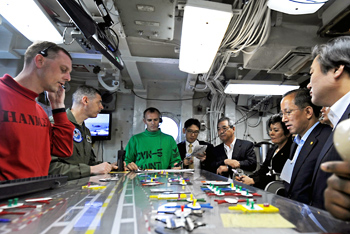 That intimidation, however, has left an opening for the U.S. to cozy up to neglected and nervous allies such as the Philippines and Vietnam. On that note, CSIS urges Obama to visit Vietnam following his September 2014 decision to partially lift the ban on the sale of U.S. weapons to Vietnam. The ideal time for such a trip, it suggests, would be November, when Obama is scheduled to attend the Asia-Pacific Economic Cooperation summit in the Philippines as well as the East Asia Summit in Malaysia.

“It’s time for President Obama to go to Vietnam, where we have an increasingly important relationship. This is not easy because of human rights violations,” Green said, noting that “we need to support countries like the Philippines that are pursuing legal means to address China’s claim of territorial rights in the South China Sea.”

The region’s biggest flashpoint is, of course, North Korea. Pyongyang’s alleged involvement in the recent cyberattacks against Sony Pictures in response to the entertainment conglomerate’s release of “The Interview” grabbed headlines worldwide — and once again raised tensions on the Korean Peninsula. It also obscured the larger picture: Pyongyang’s determination to build a nuclear weapons arsenal.

CSIS says the Obama administration must be prepared to meet a range of provocations “with concrete measures that acknowledge the necessity of deterring a nuclear North Korea.” This includes deploying more advanced missile defense systems on the peninsula, as well as encouraging South Korea to enhance its joint operational capabilities with existing U.S. missile defense assets and intelligence in the region.

The Hermit Kingdom’s record of systematic brutality should also be part of the equation. “Given the movement on condemning North Korean human rights violations, human rights should be a more central part of U.S. policy toward North Korea,” said Green.

In addition, the think tank urges the White House to work behind the scenes to mend relations between South Korea and Japan, Asia’s two most important advanced industrialized democracies. After all, 2015 marks the 50th anniversary of normalization of those ties. But while South Korea and Japan are America’s strongest allies in the region, the two share a troubled wartime history.

“It is also strategically imperative for the U.S. to work on improving Japan-Korea relations,” Green said. “This creates foreign policy complications. Korea has information-sharing agreements with 25 countries, but not with Japan.”

In the midst of uncertainty, a few Asia-Pacific success stories do shine through. One is Indonesia, where the election of Joko Widodo as president prompted The Economist to recently name Indonesia its runner-up “country of the year” (the top award went to Tunisia).

In recognition of Jakarta’s growing strategic importance, CSIS recently announced that it is renewing the Derwin Pereira Indonesia Initiative, which studies the emerging powerhouse of 250 million people. Ernest Bower, Sumitro Chair for Southeast Asia Studies at CSIS, will lead the one-year initiative, named after the award-winning journalist who is now with Harvard University’s School of Government.

“Indonesia’s rising power will be felt more tangibly in time. This project will capture the essence of its rise in the economic, political and strategic fields,” said Pereira, who has followed developments in the world’s largest predominantly Muslim nation since 1995. “Jokowi’s presidency marks a transition from Suharto’s authoritarian-led growth to a more sustainable, democratically based growth model, founded on transparency and accountability but also characterized by a laser-like focus on competence and effective governance.”

Another potential bright spot is Myanmar (Burma), whose military junta opened up to the West in 2012. The pace of political and economic reforms was dramatic, although human rights advocates have criticized the administration for easing up on sanctions too soon, before Myanmar’s transition to democracy could be completed. Longtime democracy icon Aung San Suu Kyi is widely expected to sweep elections scheuled for later this year, giving her National League for Democracy party control of Parliament for the first time ever, although she is still constitutionally barred from running for president and the military retains control of the quasi-civilian government.

“The administration has played a very responsible role in Myanmar. Our ambassador in Rangoon [Derek Mitchell] is a former CSIS staffer,” said Bower. “I think the administration really needs to work hard on the Hill to make sure there are no unrealistic expectations, but that we do have a very nuanced and effective advocacy for human rights in Myanmar. If we don’t lead with those points, we’ll lose a lot of ground in Asia.”