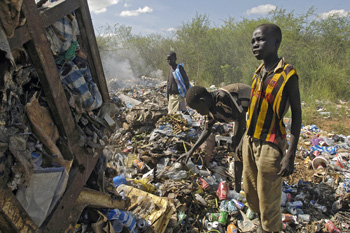 About 805 million people — more than one-ninth of the world’s population — suffer from chronic hunger. Yet inhabitants of the oil-exporting sheikhdoms and emirates of the Persian Gulf wolf down an average of 3,700 calories a day, leading to the highest rates of obesity on Earth.

Sudanese youth scavenge for food and clothing in a municipal garbage dump in Juba.

“Essentially, there’s been an absence of political will,” said GMU event organizer Phil Thomas, ex-assistant director of global food security and food aid issues at the Government Accounting Office. “Five years after the 1996 World Food Summit in Rome, many countries had developed plans of action on paper, but things had not changed. There was just a growth in rhetoric. What we found was a lack of will to implement the policy plan.”

The World Food Summit set a bold target of “eradicating hunger in all countries, with an immediate view to reducing the number of undernourished people to half their present level no later than 2015.” Meanwhile, in 2000, the Millennium Declaration promoted the goal of halving, between 1990 and 2015, the proportion of people who suffer from hunger.

There has been some progress. According to the U.N. Food and Agriculture Organization (FAO), the number of chronically undernourished people around the world is down more than 100 million over the last decade. But the developing world won’t reach the ambitious target set by the World Food Summit, and gains in some parts of the world mask wide disparities in others, such as sub-Sahara Africa and Asia.

Women and children are also disproportionately affected by hunger and malnutrition, Thomas said, noting that the world will need to increase food production by at least 60 percent by 2050, in order to feed the 9 billion people expected to inhabit the planet by then.

Thomas was among 15 scholars at GMU’s first-ever Summit on Global Food Security and Health. Among the organizations represented: Oxfam America, the International Medical Corps and the U.S. Agency for International Development (USAID). Thomas said that besides inadequate funding of agriculture development, there’s been way too much dependence on food aid and not enough on long-term solutions.

“It’s like putting a Band-Aid on cancer,” he quipped. “Food aid is not food security, and it has to be put in that context.”

The issue grabbed headlines in late 2007 and early 2008, when dramatic increases in the price of wheat, rice, corn and other basic commodities — triggered by droughts, rising oil prices, the increasing use of biofuels and the demand for more varied, richer diets in rapidly growing countries like China and India — led to food riots in Africa and elsewhere. Violence broke out in dozens of countries, but protests were particularly intense in Bangladesh, Brazil, Burkina Faso, Cameroon, Egypt, Haiti, Mozambique, Senegal, Somalia and Yemen.

In response, the Bush administration in 2008 launched an internal inter-agency review of U.S. global food security issues. The incoming Obama administration continued that review, and at the G8 summit in L’Aquila, Italy, in 2009, the White House pledged $3.5 billion, leveraging an additional $18.5 billion, to address global hunger issues.

That led to the May 2010 establishment of the Feed the Future (FTF) initiative, an alphabet-soup of bureaucracies led by USAID that also involves the U.S. Department of Agriculture, State Department, Millennium Challenge Corp., Peace Corps and other agencies.

Together, FTF is committed to spending $1 billion a year on 19 food-insecure countries in four regions, but with a primary focus on sub-Sahara Africa.

Thomas said he’s seen some advances, noting that under USAID’s development of a results-oriented monitoring and evaluation system, the program has: helped more than 7 million smallholder farms and food producers adopt improved technologies and management practices to increase yields; reached more than 12 million children under 5 with nutrition programs; and supported a $100 million increase in the value of agricultural products sold by farm households.

In 2012, the U.S. government strengthened FTF with the establishment of the New Alliance for Food Security and Nutrition, which has expanded its reach to 10 African countries, more than 160 local and international companies, and more than $7 billion in planned investments.

Meanwhile, in September, members of the House and Senate each introduced legislation to authorize the FTF initiative with an annual appropriation of $1 billion and make it permanent. 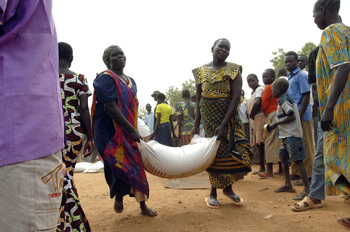 “Our concern is that once the Obama administration leaves, it will cease to exist. There is some hope that when the lame-duck session of Congress reconvenes [after the November midterm elections], it will pass,” said Thomas. “The rhetoric is easy, but the reality is that it takes time to get Congress to understand that you can’t get quick results. This has to be done in a planned, consistent, strategic manner.

Asma Lateef agrees. Since 2007, she’s been director of the Bread for the World Institute, a Washington-based Christian nonprofit that aims to end world hunger by 2030.

“There’s bipartisan support in Congress around the two bills, and there has been quite a bit of support for funding levels over the last few years. Where we are now is more than double where we were in 2008,” said Lateef, who also spoke at the GMU food security summit. “The fact it hasn’t slid during various attempts at slashing the budget is quite promising.”

In addition, Lateef said recent years have seen a huge effort to integrate nutrition into agriculture, with politicians paying more attention to issues like malnourishment in children and its long-term implication for public health.

Yet experts frequently disagree on how best to solve these complex problems.

Kenneth A. Reinert is a professor of public policy at GMU. He said that too often, economists treat food as a commodity — “just one of many things that can be consumed by households or by governments” — rather than as a basic need.

“My lens for food security is through this basic-goods approach, but it’s extraordinary how difficult it is to get economists to acknowledge that this exists,” he said. “It seems common-sensical, but economists don’t see it that way because everything is about preferences rather than needs.”

Those needs, he said, include clean water, sanitation, health services, housing, electricity, security and nutritious food. The last, said Reinert, is a “central basic good that addresses a set of needs: calories, vitamins, minerals and micronutrients. Over 800 million people suffer from chronic hunger, and vitamin, mineral and micronutrient deficiencies are even more widespread. These can lead to severe health problems.

“The United Nations says we will add 2 billion people by 2050 and an additional 1 billion by 2100, for a total world population of around 10 billion,” Reinert added. “Approximately 1 billion of these additional individuals will reside in Africa, and another 1 billion in Asia. Both Africa and South Asia are currently basic goods-deprived environments.”

Even worse, he said, “the majority of countries whose population growth is expected to be fastest in the future are precisely those showing inadequate food consumption and high levels of undernourishment.”

At the other extreme are a handful of small Arab states in the Persian Gulf that owe their mind-blowing wealth entirely to oil and gas. Yet Deborah Wheeler, a professor at the U.S. Naval Academy in Annapolis, Md., sees dark clouds on the horizon even for nations overflowing with energy riches.

“These countries depend more than 90 percent on the global food market to eat and drink,” she pointed out. “Kuwait imports 98 percent of what it eats and drinks. It makes sense for them to import. But relying on that global market is becoming increasingly problematic.” 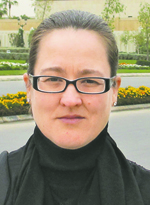 Wheeler showed her GMU audience a photo of the glitzy new Dean & DeLuca gourmet food emporium in Kuwait City. At 21,500 square feet, it’s the largest Dean & Deluca franchise in the Middle East. Another image was of the new Cheesecake Factory outlet at a Kuwait City mall.

“We’ve sent all our worst habits to the Gulf, and they are very happy to have them,” she said. “The Gulf countries are a perfect lab for studying non-communicable diseases. Diabetes is growing faster here than anywhere else on the planet, yet they’re in a water-scarce region — and it’s oil wealth that allows them to mask this problem.”

Wheeler, a political scientist who lived in Kuwait, said that in the country of 3.3 million, 70 percent of the adult population, and 48 percent of all adolescents, are either overweight or obese. 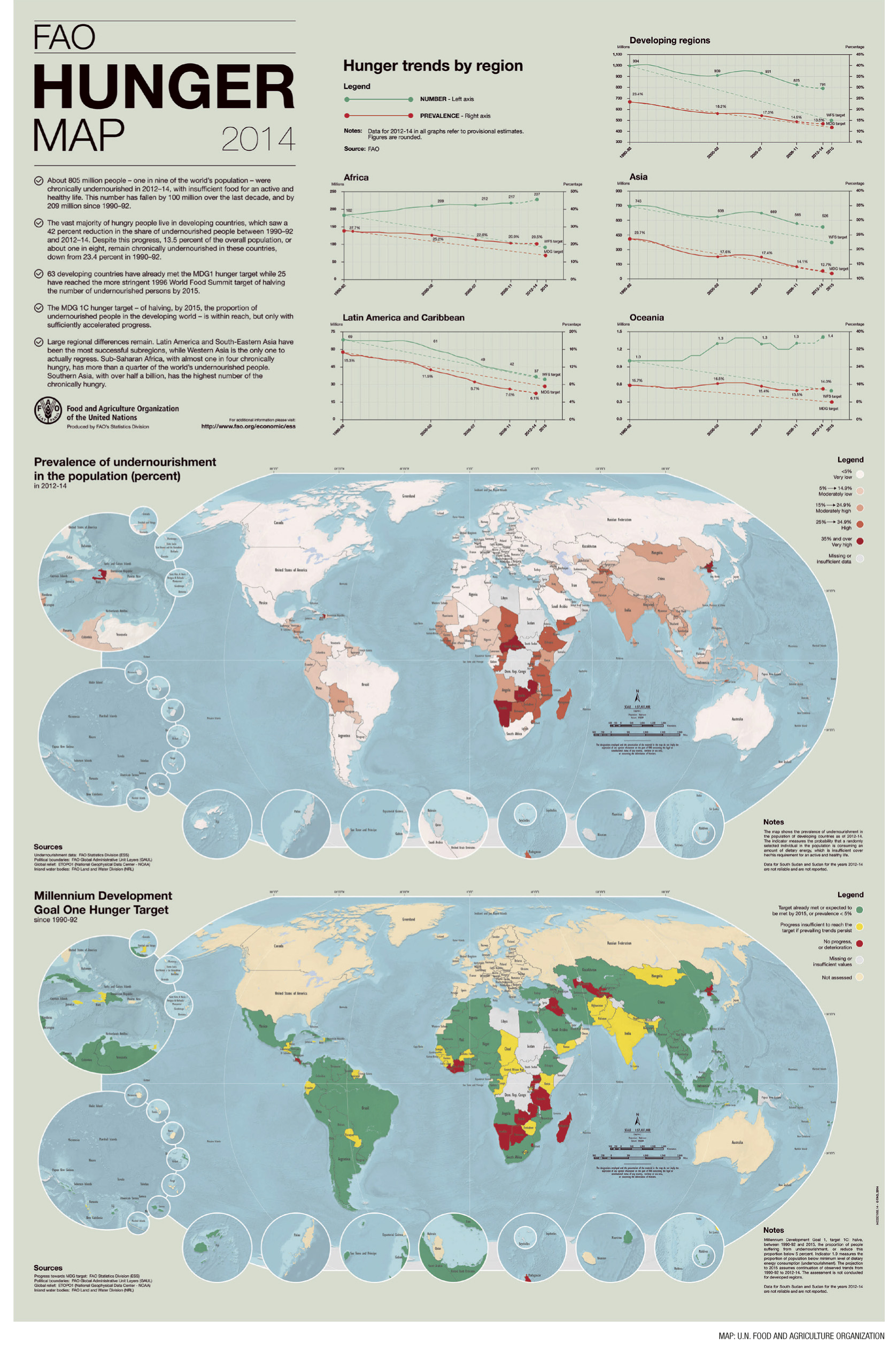 Click on the map to view a larger version

“As we know, as GDP goes up, consumption is transformed. These are rich countries and they eat like rich countries. The problem is, they don’t produce anything they eat,” she warned. “In spite of having all that oil wealth, which allows them to live way beyond their ecological footprints, we’re starting to see cracks. How did the Tunisian revolution start? A vegetable seller set himself on fire. That led to a transition.”

Wheeler added: “These countries are so fragile. As soon as they collapse, we’re going to see massive Islamization.”

In fact, Kuwait, Qatar, Saudi Arabia and the United Arab Emirates rank in the bottom 10 percent of the world’s sustainable nations. All of these countries have seen population growth exceeding three times the global average, yet during the same time there’s been a rapid decline in the amount of available fresh water. They also have the world’s highest per-capita water consumption, even though their countries are among the driest on the planet.

These countries are among the biggest food wasters in the world as well, producing 150 million tons of municipal garbage a year. In addition, they release more carbon into the atmosphere on a per-capita basis than anyone else. Yet they don’t produce anything, which is why the Gulf Cooperation Council’s food import bill has jumped by 105 percent since 2010; experts estimate that the six GCC nations will spend a combined $53 billion a year on food by 2020.

Budget constraints and the plummeting price of oil are why some Gulf countries are broaching the sacrosanct but costly subject of fuel and food subsidies that governments dole out to keep their citizens happy. But any talk of cutting the artificially cheap oil and gas that Gulf residents have come to expect provokes instant outrage.

“People are aware of the fact the cost of living is increasing rapidly. And what are their governments doing? They’re cutting subsidies. This leads to public protests in places where we don’t expect it,” Wheeler said, arguing that this is why Washington needs to be concerned. “Last summer while I was in Kuwait, there were public demonstrations in support of the Islamic State. They’re upset with their government, and any movement that looks like it might sweep that existing government out of the way will get their support.”