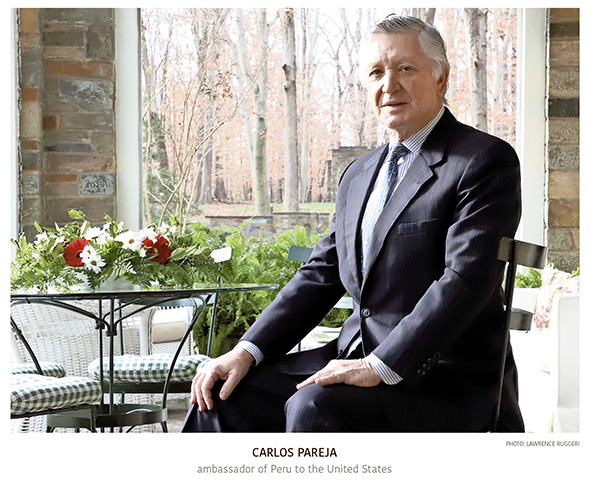 Peru, which is world-famous for its delicious ceviche, the majestic ruins of Machu Picchu and pisco sour — a sweet but potent alcoholic beverage — is also apparently a Latin American cesspool of corruption.

The last four presidents of Peru before the current one, Martín Vizcarra, are all being investigated for wrongdoing in connection with Odebrecht, a giant Brazilian construction and engineering conglomerate whose web of corruption scandals has ensnared governments from Colombia to Ecuador to Peru.

“We’ve had political turbulence, dictatorships and military governments in Peru’s history, but our democracy continues to function very well, even with the corruption we’ve seen in the last few years,” said Carlos Pareja, Peru’s ambassador to the United States. “Our former president, Pedro Pablo Kuczynski, took office in July 2016 but had to resign, due to this big tsunami of corruption related to Odebrecht. The vice president, Vizcarra, took over, with no complaints from the judicial system or the press. It was a very smooth transition.” 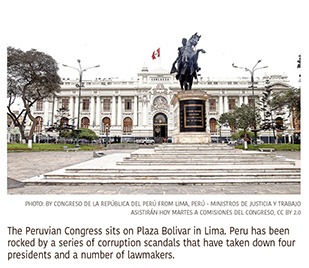 Pareja spoke to The Washington Diplomat on Oct. 30 during one of our Ambassador Insider Series events, held at the Peruvian Embassy near Dupont Circle. The Q&A, followed by a reception, attracted about 100 people, including the Washington-based ambassadors of Jamaica, Belgium, Paraguay and Nicaragua (also see photos in this month’s spotlight section).

Nearing retirement after a long career in the Foreign Service, the 68-year-old Pareja is no stranger to Washington. From 1984 to 1990, he was a political counselor at the embassy. The ambassador’s father, José Pareja Paz-Soldán, was a prominent member of Peru’s Foreign Ministry as well as director of the Diplomatic Academy of Peru. And his great-grandfather actually started the Peruvian Foreign Service in 1864.

Pareja has also been posted as ambassador to Chile, Spain and Switzerland, and he was chief of state protocol in Peru. In addition, he’s served at the Peruvian Foreign Ministry as director-general for the Americas, and later director-general for Africa, the Middle East and the Gulf — a post he held until returning to Washington for his current assignment in September 2016.

Peru currently has 32 million inhabitants, well over a third of them in Lima. That makes it South America’s fourth-largest metropolis after São Paulo, Buenos Aires and Rio de Janeiro. Nearly twice the size of Texas, Peru is the world’s second largest exporter of copper, after Chile, and has a GDP of $211 billion. It’s also, along with neighboring Colombia, one of the world’s top cultivators of coca, the main ingredient in cocaine.

On the whole, Peru’s economy — once dubbed the “Pacific Puma” — is one of the most enviable in Latin America. After decades of military rule and the highly polarizing presidency of Alberto Fujimori in the 1990s that saw both economic gains and authoritarian backsliding, Peruvians are doing better than many of their neighbors.

The country has seen four successful democratic elections since 2001, along with steady, robust economic growth driven by sound, market-oriented policies. Yet Peruvians, while doing relatively well economically, don’t trust their own leaders — and all four of their most recent presidents have been toppled by allegations of corruption and human rights abuses. (A fifth, Alberto Fujimori, is in jail while his daughter Keiko, an influential politician, was recently arrested for corruption.)

The list of disgraced presidents includes Pedro Pablo Kuczynski, in office from 2016 to 2018. He resigned ahead of an impeachment vote in the wake of a string of scandals, including accusations that he took bribes from Odebrecht and tried to buy votes to avoid impeachment. 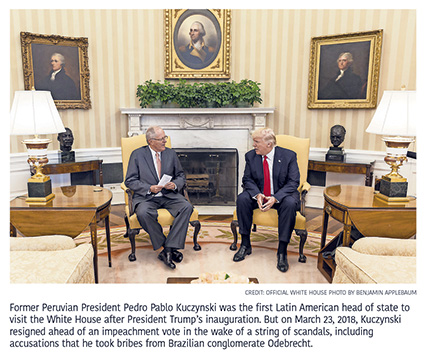 Likewise, Ollanta Humala, in office from 2011 to 2016, is accused of taking bribes from Odebrecht to bankroll his election campaign; he is currently in pre-trial detention.

Alejandro Toledo, in office from 2001 to 2006, is also accused of taking millions of dollars in bribes from Odebrecht. He’s currently a fugitive in the U.S. fighting extradition back to Peru.

Finally, Alan García, in office from 1985 to 1990 and again from 2006 to 2011, had a particularly roller-coaster presidency. His first term was marred by an economic crisis and social unrest. Under his second term, though, Peru registered impressive economic, but eventually, García, too, was suspected of taking kickbacks from Odebrecht. In December, he sought asylum in the Uruguayan residence to escape bribery charges in connection with the Odebrecht scandal, but his request was denied.

“As in many countries, people are not confident in their governments. Many don’t believe in their traditional leaders or institutions any more,” Pareja conceded. “And social media is so important now, especially for young people. It’s quite a revolution.”

It’s a seismic revolution that has shaken the entire region. Odebrecht, the company at the center of this corruption tsunami, has already admitted to having paid close to $800 million in bribes to politicians in a dozen countries, in exchange for help winning lucrative contracts to build everything from gas pipelines to hydroelectric dams. Nearly half that total, $349 million, involves Brazil, where the conglomerate is based. Also implicated are politicians in Peru, Venezuela, Panama, Angola, Argentina, Ecuador, Guatemala, Colombia, Mexico, Mozambique and the Dominican Republic.

To be fair, Peru — which marks its 200th anniversary of independence in 2021 — has made enormous strides in reducing endemic poverty among its millions of indigenous citizens. Under President Alberto Fujimori, who ruled from 1990 to 2000, the murderous Shining Path terrorist group was defeated. But the violent crackdown also resulted in the deaths of nearly 70,000 people.

Fujimori was ultimately sentenced to 25 years in prison on corruption and human rights charges. In December 2017, Kuczynski freed the 79-year-old former strongman on humanitarian grounds. Given that Kuczynski narrowly defeated Keiko Fujimori in the 2016 election and that he considered the Fujimori family dynasty to be his political rivals, the pardon raised more than a few eyebrows. So did the fact that Kuczynski survived an earlier impeachment attempt thanks only to the abstentions of a few lawmakers from Fujimori’s party. 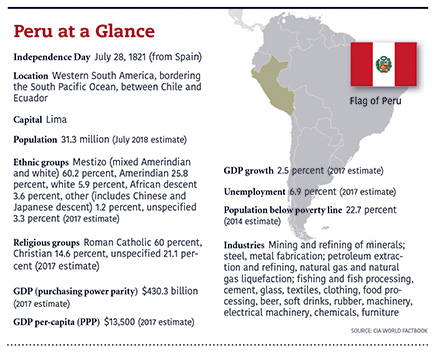 The apparent quid-pro-quo sullied Kuczynski’s reputation and cemented his downfall. Meanwhile, Alberto Fujimori’s release sparked an outpouring of joy among his supporters, and widespread rioting by those who remembered his authoritarian rule with fear and loathing. (Kuczynski’s pardon was overturned by the Supreme Court in October and Fujimori is now back in jail.)

Meanwhile, Fujimori’s daughter, Keiko, is also now in prison, facing charges she accepted $1.2 million in bribes from Odebrecht in 2011. A judge ordered Keiko Fujimori to serve three years in prison as a preventative measure while prosecutors investigate claims she ran a “de facto criminal organization” within her political party to launder campaign donations. The once-powerful politician, who lost presidential election runoffs in 2011 and 2016, denies all wrongdoing and claims the charges against her are politically motivated.

“Politics in Peru currently looks more like a crime series. But it also shows that in spite of the daily surreal events, Peruvian institutions have the strength to overcome them and move forward,” said Katya Salazar, executive director of the Due Process of Law Foundation. “President Vizcarra is making the right decisions, several judges have been detained or removed from their positions, and the new head of the judiciary is an honest judge and academic. It’s our responsibility to keep monitoring the situation and not dismay.”

The new president has made headway in his push to curb corruption. Voters overwhelmingly approved a series of reforms that Vizcarra proposed in a Dec. 9 referendum. Among the measures that voters supported, according to exit polls: allowing the public to vote on nominated judges; making political parties and campaign finance laws more transparent; and ending consecutive re-election for legislators. But voters rejected a fourth measure that would have added a second legislative body by recreating the Senate that Peru had until 1992, when Fujimori dissolved Congress.

Ironically, despite the referendum, which marked a clear victory for Vizcarra over the opposition led by Keiko Fujimori, the Fujimori dynasty retains strong support. Pushed to explain Alberto Fujimori’s enduring popularity — especially among average Peruvians who wax nostalgic about his authoritarian rule — Pareja said that in the late 1980s, his country was an economic basket-case teetering on the edge of bankruptcy. That, he said, was largely the fault of then-President García.

“Fujimori won the election in 1990 because people were afraid of a liberal revolution,” Pareja said. “Upon taking office, he implemented the privatization of state-owned companies. Much of the progress you see in Peru today came from the Fujimori regime’s economic transformation. He also put an end to terrorism, and people are really grateful for that. Unfortunately, his was a very corrupt government.”

So, apparently, were all the governments that followed Fujimori, at least until the current one. 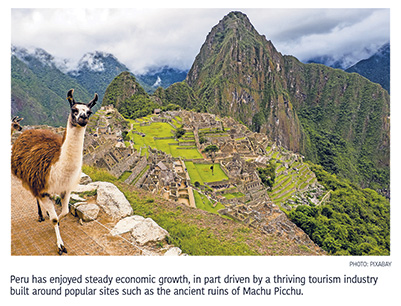 “Peru is going through a period of presidential banditry where all elected presidents — Fujimori, Toledo, García, Humala and Kuczynski — are being accused or investigated for alleged bribery, money laundering or conflicts of interest,” said Francisco Durand, a political science professor at the Pontifical Catholic University of Peru. “Keiko Fujimori joins the infamous list and runs the risk of being jailed again together with her inner circle. All these politicians, invariably, claim to be ‘persecuted’ but the cases are not baseless.”

In Transparency International’s 2017 Corruption Perceptions Index, Peru ranks 96th — placing it on par with Brazil and Colombia, but not as bad as Ecuador, Mexico, Russia, North Korea or Venezuela. On the other hand, it scores worse than Uruguay, Chile, Costa Rica, Cuba and even Argentina.

But Latin America’s epic fight against graft has barely registered with its neighbor to the north. Asked whether the United States under Donald Trump has neglected Latin America — as some high-level U.S. diplomats including John Feeley, the former U.S. ambassador to Panama who resigned last year in protest, have alleged — Pareja, unsurprisingly, took a diplomatic approach.

“Our region has no major conflicts, no religious wars and no civil wars, even though we do have a very difficult situation in Venezuela,” he said. “We are not a threat to the security of the United States. Maybe that’s why the White House focuses on Iran, North Korea, China and the Middle East. On the contrary, we are quite friendly with the U.S., and fortunately, our two countries have a very warm relationship.”

Pareja pointed out that 11 members of Congress and nearly 200 business executives accompanied Vice President Mike Pence to Peru for the Summit of the Americas, which Lima hosted last April. And he added that Kuczynski was the first Latin American head of state to visit the White House after Trump’s inauguration.

Despite some nostalgia for the law-and-order days of Fujimori, Pareja said he does not see a trend toward authoritarianism, even with the recent election of right-wing populist Jair Bolsonaro as president of Brazil.

“Argentina came out of a very populist, corrupt government under [Cristina Fernández de] Kirchner, and now they’re going in the right direction. So are Chile, Ecuador, Colombia, Panama and Costa Rica,” he said. “Most of our governments in Latin America are on the right path now.”

Meanwhile, “President Vizcarra has found that leading the fight against corruption is politically advantageous to him; his popularity shot up 16 points in the last month,” said Julio Carrión, associate chair of the University of Delaware’s Political Science and International Relations Department. “The forces that are fighting to end corruption in the judiciary and the nefarious practice of using undeclared funds in electoral campaigns have found a powerful ally. Nevertheless, it is too early to tell whether this anti-corruption campaign will have enduring consequences.”

Pareja admits that most Peruvians are “furious” at their country’s legacy of corruption but that his country has finally turned a corner.

“President Vizcarra sees this issue as a matter of great importance,” Pareja told us. “These scandals have been terrible, but I’m really optimistic that after we have fallen so low, we will survive and be better off.”