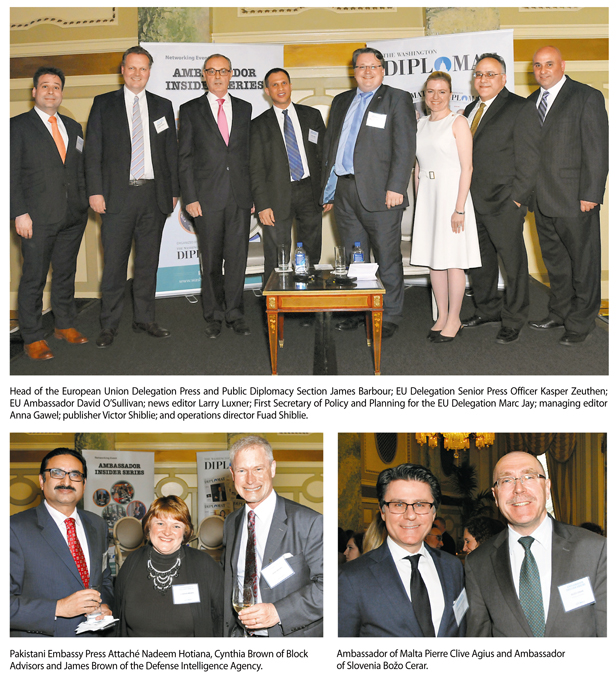 David O’Sullivan, who has represented the 28-member EU in the United States since November 2014, captivated his listeners for an entire hour with his witty answers to questions posed by The Diplomat. His audience of about 150 included 30 fellow diplomats — among them the ambassadors of Albania, Hungary, Malta, Serbia and Slovenia — and staffers from 20 members of Congress.

“I may represent an institution which represents, in its turn, 508 million people, but of course I don’t represent all 508 million of them,” he explained. “I have 28 ambassador colleagues who do an excellent job representing their countries. My job is to speak on those issues where we have decided the European Union should be the spokesperson — for example, certain aspects of foreign policy, trade, security, high-tech issues, the digital single market, food safety, a whole range of issues. The motto in America is e pluribus unum — out of many, one; the EU motto is ‘united in diversity.’”

But that unity is being sorely tested — ironically by the bloc’s diversity, or more specifically, its immigration policies. O’Sullivan spoke a few weeks before British voters — angry in part over an influx of immigrants — stunned the world and opted to leave the European Union in a June 23 referendum that dealt a significant blow to Brussels. The longtime Irish diplomat, who joined the European Commission in 1979, was candid about the problems the bloc faces, though he preferred to focus on the positive.

“We have a lot of challenges, but Europe is actually a pretty good place to live,” O’Sullivan said when asked how the EU was dealing with its various crises. “We’re the largest economy in the world. I like to joke that when America and China argue over who has the biggest economy, you’re fighting over second and third place. And regarding our biggest crisis of the moment — the refugee crisis — forgive me, but it’s actually a sign of our success. Why do people want to come to Europe? Because it represents peace, prosperity, social justice, the rule of law and opportunity. It is still a glorious place to live and work, with a very great future ahead of us — in spite of the current difficulties.”

O’Sullivan said the 19-nation eurozone is still recovering from its 2008 financial meltdown and a near-collapse of the Greek economy, and that the EU is today in sound shape. With a combined GDP of $18.5 trillion, it comprises 29 percent of the global economy and ranks as the top trade partner for 80 countries around the world.

“Yes, we’ve had enormous difficulties following the 2008 crisis. There was a global recession, one of the largest in living memory. It exposed flaws in the architecture of economic and monetary union, but I firmly believe that without the euro, we would have had an even worse recession in Europe,” said O’Sullivan, predicting economic expansion of 1.5 to 2 percent this year and in 2017.

“For the last four years, the eurozone has seen positive growth,” he said. “Unemployment has come down from 10 to 8 percent on average, and we have turned the corner, though being competitive in the 21st century is a challenge for all the aging economies of the world.”

O’Sullivan challenged the notion pushed by so-called “euroskeptics” that EU membership has been a burden to its 28 member countries. 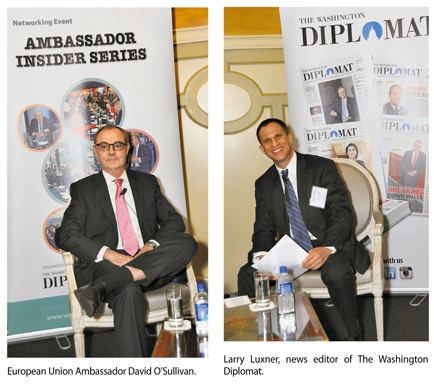 The same holds true for the bloc of Central and Eastern European countries that were admitted to the EU club in 2004, he said.

“Compare Poland and Ukraine,” he suggested. “In 1990, Ukraine’s income was multiples that of Poland. Today it’s absolutely the other way around. Why? One joined the EU and the other one didn’t.”

O’Sullivan noted the historical significance of holding an EU-focused event at the Willard. During World War II, the stately hotel on Pennsylvania Avenue housed the ninth-floor office of Jean Monnet, a French diplomat who advised President Franklin D. Roosevelt on the war effort and later became one of the founding fathers of the European Union. In 1997, the hotel unveiled a bronze plaque honoring Monnet.

In keeping with EU policy, O’Sullivan refused to discuss the U.S. presidential elections, and he offered only brief remarks on the landmark Brexit referendum, which had yet to take place at the time.

Meanwhile, O’Sullivan — only the second diplomat to represent the Brussels-based bloc in Washington since the position was established in 2009 — has his hands full dealing with Europe’s refugee crisis, the worst since World War II.

More than a million migrants, mostly refugees from Syria’s never-ending civil war, poured into Europe last year alone, and the cumulative total could reach 2 or 3 million by December 2016. Yet the idea that Europe is quickly becoming Islamized is patently ridiculous, O’Sullivan told his audience.

“We are far from overrun by Muslims,” he said, estimating Europe’s average Muslim population at 5 to 6 percent of the total, though that varies widely by country. “This is a very welcome community that contributes enormously to our well-being and our diversity, and long may it stay that way.”

And that welcome mat must remain out there even as European capitals from Paris to Brussels continue to be targeted by Islamic State radicals, he said.

“I don’t think we should conflate the issues of refugees and terrorists. These refugees are fleeing from the very same terrorists who are setting off bombs in Europe,” he said. “Every day, infinitely more terrorist acts are committed in Iraq, Afghanistan, Lebanon and Pakistan than in the Western world. Put this in perspective: These events are horrible, and we should do everything we can to protect our citizens.”

But European terrorism has been around since at least the 1960s, said O’Sullivan, recalling that as a boy growing up in Ireland, bombs were an everyday occurrence.

“Terrorism is not a new phenomenon,” he said, ticking off the Irish Republican Army, Germany’s Baader-Meinhof gang and the Basque separatist group ETA. “We’ve overcome it in the past, and we’ll overcome it in the future. But the thing we must not do is fall into the trap set by the terrorists — of allowing them to divide our societies or to provoke us into excessive reactions which actually turn us into recruiting centers for those very same terrorist organizations.”

O’Sullivan said the solution ultimately lies in stopping Syria’s civil war and getting urgent help to Syria’s neighbors, “which have borne the brunt of that crisis.” That includes overcrowded Lebanon, where Syrian refugees comprise a fourth of the country’s population, and Jordan, where one in seven inhabitants is now a Syrian refugee — as well as Turkey, which is home to 2.5 million refugees.

“These people don’t want to leave their country. They’re being driven out of their country,” he said. “We have an obligation to show understanding for their situation and to respect our international obligations under the Geneva Conventions to protect and offer asylum to those people who are fleeing conflict and persecution. They don’t see a future for themselves as long as this conflict continues, so they turn to the next most attractive place, which is Europe.”

Absorbing even 2 million refugees for a wealthy continent of 508 million inhabitants would not be too difficult on a continental scale, he said. “But unfortunately, we don’t manage refugees and asylum-seekers on a continental scale. We manage it at the level of each member state. Germany alone has had to absorb 1.2 million asylum seekers, which is equivalent to 5 million in the United States.”

Far more dramatic is the case of cash-strapped Greece, whose 11 million people have absorbed 1 million Syrian, Afghan, Iraqi and other refugees; this is equivalent to the United States taking in 32 million desperately poor people.

“If faced with a challenge on that scale, the U.S. would also have to struggle to find an immediate answer,” O’Sullivan said, adding that these refugees and asylum-seekers have legal rights.

“When these people knock on your door, you cannot simply open the door and close it again, or give them a piece of paper and tell them to come back in a few years,” said the ambassador. “We are legally required to bring them in, look after them, house them, offer them shelter, medical needs and process their application for asylum in accordance with international law. We cannot pretend this is not happening.”

But human rights critics say that under a new EU pact with Turkey, that’s precisely what is happening. Turkey has offered to swap refugees traveling the Mediterranean route to Greece for Syrian refugees already vetted in Turkey in a controversial deal that promises Ankara visa-free travel to the EU and sped-up talks on joining the bloc in return for clamping down on migration. Despite the criticism, O’Sullivan said that Turkey is key in the current attempt to slow down the exodus of asylum-seekers.

“Our objective is not permanent migration, but to create a peaceful situation in Syria to which they can return and build a future. We’re asking the Turkish authorities to help us block the cynical exploitation of these refugees by smugglers,” he explained. “We have said we will provide additional resources to help refugees already in Turkey. This money is not for Turkey or the Turkish government, but for the refugees. We’re trying to break the grip of smugglers and put in place a much more efficient and humane way of dealing with the refugee crisis.”

What about Eastern European countries like Hungary, which have no tradition in general of taking in outsiders — and particularly Muslims — and have erected barriers to keep migrants out?

“Some member states feel it is not fair to ask them to accept refugees who were not looking to go to their countries but who have landed elsewhere,” said O’Sullivan. “If you manage this on a continental scale, then 2 or 3 million refugees would not mean a very heavy burden for any one country. But if you don’t, then you necessarily push the responsibility onto the frontline states like Italy and Greece, or those countries that have announced a willingness to accept refugees, such as Germany or Sweden.”

The dilemma, he admitted, has led to unprecedented disagreements following the European Council’s November 2015 decision to relocate 160,000 refugees throughout Europe. But some leaders, notably Hungarian President Viktor Orbán, oppose the mandatory quota plan and have called for a national referendum on the subject.

“We have, for the first time in the EU’s history, a situation where some member states have said that, ‘Well, that may be a legal decision, but we don’t feel very comfortable implementing it.’ This is a very serious situation and we have to deal with it,” said O’Sullivan — though he added that ultimately, the EU itself is built on solidarity.

“All of our member states come to Brussels at some point looking for help from other member states. That’s how we function,” he said. “We cannot ignore the pressure on frontline states, particularly Italy and Greece. We have to share this burden equitably or it will become unsustainable — but we cannot abandon our very important European commitment to humanitarian values. We have to show an example to the world.” 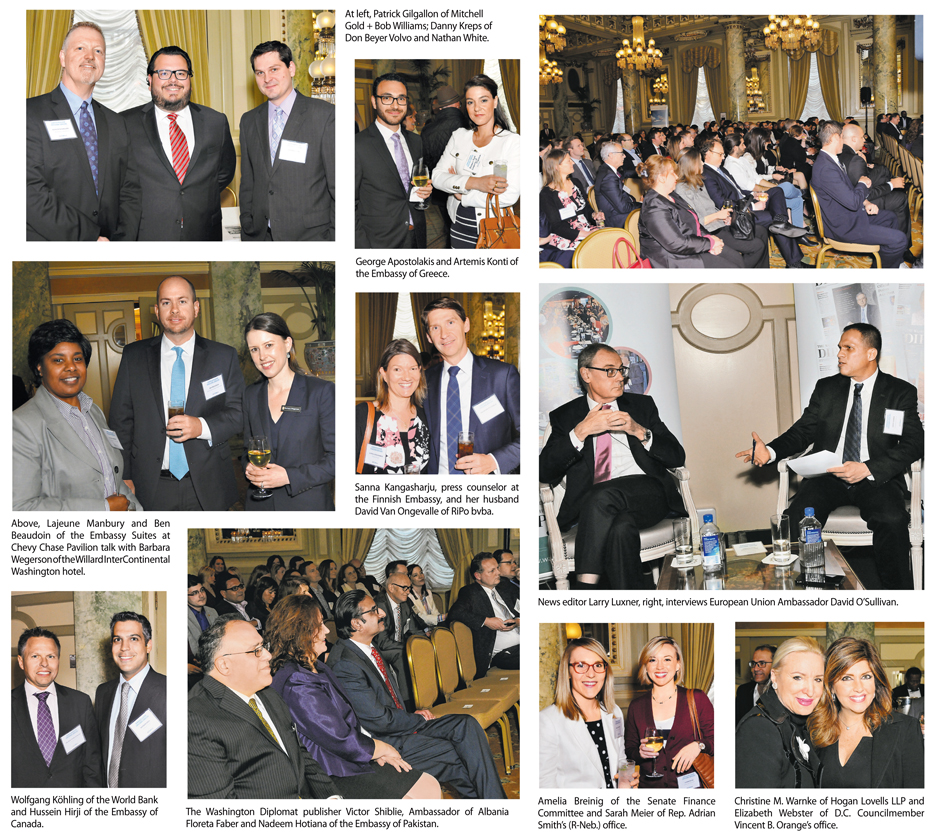