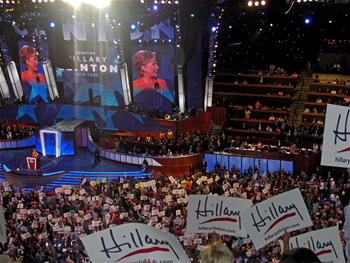 From fistfights between delegates to a parading baby elephant through the festivities, the national conventions of America’s political parties can be a wild ride.

Every four years, each party gathers its faithful in respective conventions to nominate a candidate for president. This year, the Republicans will hold their presidential nominating convention from July 18 to 21 at the Quicken Loans Arena in Cleveland, Ohio. The Democrats, meanwhile, will host their convention in Philadelphia at the Wells Fargo Center from July 25 to 28. If history is any indicator, political observers may be treated to some crazy sights and high drama.

Political conventions are a classic American tradition and integral to today’s democratic process, although they are not mentioned in the U.S. Constitution. But the country has moved far from the Founding Fathers’ original distrust of the party system and the early process to nominate candidates in secret caucuses by those in Congress.

There had been some speculation over whether this year’s GOP convention would be a contested convention, in which no candidate wins the majority of delegates in the primaries, or a brokered convention — when no candidate is picked in the first round of voting and then deals are made during a behind-the-scenes free-for-all until a candidate gets the needed votes. But GOP presidential candidate Donald Trump in May secured enough delegates to clinch the party nomination. Democratic contender Bernie Sanders, meanwhile, could upend the party’s gathering by bringing his campaign platform into the convention, even though former Secretary of State Hillary Clinton locked down the Democratic nomination in June.

Given that both Clinton and Trump have the delegates required, there’s likely to be little real drama over who will be each party’s nominee for president at 2016’s conventions. But that doesn’t mean there won’t be any excitement.

Business mogul Trump has pledged to use the skills he honed as a reality TV star to turn the coronation into a must-see mega-event. He’s flirted with the idea of revealing his vice presidential pick and Cabinet lineup at the convention to build suspense, renting out a sports stadium to deliver his acceptance speech and bringing on “winners” to speak, such as Pittsburgh Steelers quarterback Ben Roethlisberger. The prospect of turning the convention into a “showbiz” attraction, however, has establishment Republicans nervous, especially after the Orlando mass shooting that killed 49 people.

Meanwhile, Sanders is calling for a “fundamental transformation” of the Democratic Party, saying he will push his progressive agenda at the upcoming convention. Among his demands are open primaries and the elimination of “superdelegates,” party officeholders and insiders who can cast a vote for whoever they want.

While it remains to be seen how far Trump and Sanders will go to upend tradition, conventions are still crucial for other purposes. The parties will both present their platforms and feature speeches from top leaders and up-and-coming members — all done within the helpful hours of prime-time TV. 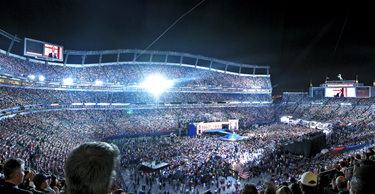 Over 80,000 people fill Invesco Field in Denver to hear Barack Obama’s acceptance speech at the 2008 Democratic National Convention. This year’s Republican nominee, Donald Trump, has floated the idea of renting a stadium for his acceptance speech as well.

One of the key features of a political convention will likely come to the fore in 2016 more than in recent years, as members work to demonstrate party unity and remove any notion in voters’ minds of conflict within the party. No question that will be a hard task after the divisiveness of both the GOP and Democratic primary season, so expect potential fireworks as different players seek to advocate, or in the end subjugate, their visions of American politics.

In the modern era, political conventions serve a crucial role as glorified advertisements for their parties, so watch out for what themes and players emerge on television screens. (In 2004, a then-unknown senator named Barack Obama, who had just been elected to Congress a few months earlier, gave the keynote address at the Democratic National Convention in Boston, propelling him to political stardom.)

And along with the potential strife within both parties after this election’s brutal primary season, expect plenty of other shenanigans at the respective party conventions this summer. Just look back at some of the craziest moments from conventions past for an idea of how wild these events can get.

The GOP took its spirit animal to another level in 1948. The Republicans gathered together in Philadelphia to choose between New York Gov. Thomas Dewey and Sen. Robert Taft, who was backed by a sizable supporter. That would be Little Eva, an elephant who came to town to “throw her weight behind” his presidential candidacy, as the Associated Press wrote on June 19, 1948.

“Backers of the Ohio senator promptly labelled her as the ‘weightiest’ supporter of his drive for the Republican presidential nomination. They hoped she would tip the scales of the GOP convention in his favor,” the AP wrote. “Little Eva, it should be explained, is a two-year-old 500-pound elephant. She was borrowed from a circus, equipped with campaign regalia and flown here to give the Taft backers a living example of the traditional Republican symbol.”

All that heft, however, proved no match for Dewey, who secured the nomination at the contested convention and then famously lost to Harry Truman later that year.

Jump forward 20 years, meanwhile, for a very different experience that occurred far from the pomp and circumstance of the convention floor. In 1968, a year of riots and civil unrest around the U.S. and the world, the Democrats converged on Chicago. With the Vietnam War, the assassinations of both Martin Luther King Jr. and Bobby Kennedy, and President Lyndon Johnson’s withdrawal from the race weighing over proceedings, there was great unease going into the convention over the future of the Democratic Party. 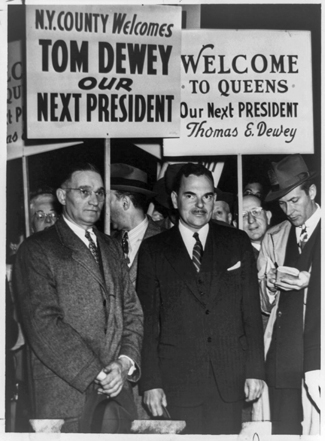 Thomas E. Dewey campaigns with Thomas J. Curran, a Manhattan GOP leader, during the 1948 presidential election. Dewey secured the Republican nomination at a contested convention that year and then famously lost to Harry Truman.

That drama played out as thousands of protesters took to the streets to show their support for removing U.S. troops from Vietnam. Things quickly spiraled out of control, as police and National Guardsmen beat and gassed demonstrators — along with anyone who was in the way, including media personnel documenting the violence and doctors who had come to provide aid. The Aug. 28, 1968, clashes made their way onto TV screens across the U.S., leaving the nation stunned as the antiwar crowd chanted, “The whole world is watching.”

On accepting the nomination, Vice President Hubert Humphrey told his fellow Democrats: “This moment is one of personal pride and gratification. Yet one cannot help but reflect the deep sadness that we feel over the troubles and the violence which have erupted regrettably and tragically in the streets of this great city, and for the personal injuries which have occurred. Surely we have learned the lesson that violence breeds more violence and that it cannot be condoned — whatever the source.”

The unruly convention didn’t help the Democrats’ image at the ballot box. In November, former Republican Vice President Richard Nixon defeated both Humphrey and a third-party bid from segregation advocate and former Alabama Gov. George Wallace. The Democratic Party, meanwhile, overhauled its rules for for selecting presidential delegates to ensure broader participation and a more open nominating process in an effort to avoid the chaos of 1968.

That year wasn’t the only one in which a Democratic convention saw violence. The party’s 1924 gathering was dubbed the “Klanbake” — as in the Ku Klux Klan, the white supremacist movement in the United States. The party was deeply divided between the Northeastern, urban, anti-Klan Democrats led by New York Gov. Al Smith and the Southern Democrats led by former Treasury Secretary William Gibbs McAdoo, who refused to condemn the KKK. But there were 13 other candidates at this wild event as well. And with fistfights and scuffles breaking out in Madison Square Garden, the Democrats witnessed the longest brokered convention in history.

The convention lasted from June 24 to July 9, 1924 — unimaginable by today’s standards. Smith and McAdoo both withdrew on the 99th ballot and finally, on a record 103rd ballot, John W. Davis, a dark horse candidate from West Virginia, was nominated. But as a conservative Democrat, many liberals weren’t fans — and in the election they backed a third-party campaign waged by a candidate from the Progressive Party. Both lost, and incumbent Republican President Calvin Coolidge emerged victorious.

Perhaps journalist H.L. Mencken, who covered the 1924 debacle, captured the bizarre world of American political conventions best: “For there is something about a national convention that makes it as fascinating as a revival or a hanging,” he wrote. “It is vulgar, it is ugly, it is stupid, it is tedious, it is hard upon both the higher cerebral centers and the gluteus maximus, and yet it is somehow charming. One sits through long sessions wishing heartily that all the delegates and alternates were dead and in hell — and then suddenly there comes a show so gaudy and hilarious, so melodramatic and obscene, unimaginably exhilarating and preposterous, that one lives a gorgeous year in an hour.”