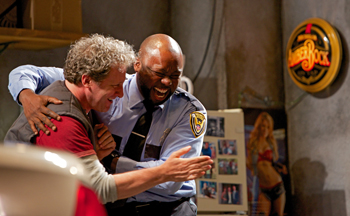 The Contemporary American Theater Festival (CATF) will return to Shepherdstown, W.Va., for its 26th year this July, and its organizers are brimming with excitement.

The newest plays in America are once again about to descend on the oldest town in West Virginia, CATF founder and producing director Ed Herendeen excitedly told The Washington Diplomat.

Past productions at the Contemporary American Theater Festival include “North of the Boulevard.”

“Our mission is to produce and develop new American theater — world premieres, as well as first and second productions of recently produced plays — plays where the playwright is still working on the script,” he said.

Herendeen said the festival, scheduled for July 8 to 31 on the campus of Shepherd University, gets bigger every year. Nearly 15,000 people attended from 37 states last year and even came from overseas.

“One of our goals is to increase international visitors,” he said. “In March, CATF was listed in World Guide [a publication based in Munich, Germany] as one of 10 best theater festivals this summer. Of the 10 listed, only three are festivals in the United States.”

Inclusive of the 2016 season, CATF will have produced 115 new plays, of which 43 were world premieres, by 80 different writers. About 42 percent of the plays are by women — nearly twice the national average of other theaters.

“We have a very specific mission: We’re one of a handful of theaters that focus solely on new work. I read over 100 submissions a year, narrow them down to about 125 and then choose five scripts out of those to produce,” Herendeen explained. “All the plays we choose have been written in the last year.”

The five chosen plays are performed in rotating repertoire, which means that over the course of two days, a theater-goer can see all five productions.

“This allows you to immerse yourself in new American theater,” he said.

Although the plays are unrelated to each other — “the plays are what’s on the minds of five different writers,” he said — some common themes tend to run through the five scripts.

One contemporary issue that resurfaces in a number of the plays this year is the idea of what it means to be “the other,” Herendeen said.

For example, the play “Second Girl,” written by Ronan Noone and directed by Herendeen,” is set in 1912 New England and is an inventive take on Eugene O’Neill’s “Long Day’s Journey into Night” told through the eyes of the play’s servants. A cook and a maid, both Irish immigrants, as well as a chauffeur search for love and belonging while working for the play’s main characters, members of the Tyrone family, a wealthy, deeply disturbed family in Connecticut.

“The play is an exploration of what it means to be ‘home,’” Herendeen explained. “What does ‘home’ mean to an immigrant? Home is a multifaceted word. This play looks at this current issue in today’s society; it references the turmoil around immigration.” 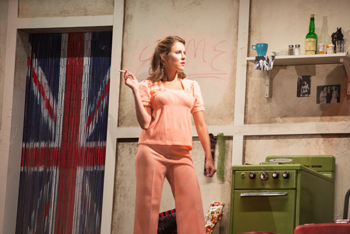 Another play to run this summer is “The Wedding Gift,” a comedy-drama and world premiere written by Chisa Hutchinson and directed by May Adrales. This play also explores the notion of being an outsider to a community, of being “the other.”

In the play, average man Doug finds himself at a wedding, not as a guest — but as a gift. He is surrounded by people who speak a language he’s never heard, and he then realizes he’s little more than a pet. The play is about a culture set in the future, where all the characters are people of color except for Doug.

By reversing roles and making the majority racial group in the U.S. — white people — the minority, “The Wedding Gift” flips what it means to be the other, Herendeen said.

“I don’t pick themes, but I see how the plays are related to each other in different ways,” he said. “I believe these five writers are listening to America, have their ears to the ground, and are telling America’s stories. The plays are a snapshot of the American landscape today.”

Also this summer, CATF is producing “pen/man/ship,” written by Christina Anderson and directed by Lucie Tiberghien, about an American surveyor in the late 1800s engaged by the government to survey land in Liberia to create a penal colony for African American offenders.

“Not Medea,” written by Allison Gregory and directed by Courtney Sale, is an explosive take on love and motherhood as a woman hijacks a theater play — and the audience.

Lastly, “20th Century Blues,” a world premiere by Susan Miller that’s directed by Ed Herendeen, dissects time, memory and friendship. It tells the story of four decades of four strong women, who were arrested together in the 1970s and meet every year at a reunion of sorts amid the vagaries of love, careers, children, lost causes and tragedy.

“You hardly ever see plays with four leading ladies in the ’60s,” commented Herendeen.

“One of the hallmarks of CATF is that we have a lot of auxiliary programs like staged readings of scripts we’re considering to produce in the future, scholarly sessions and late night salons where people can discuss the plays they’ve seen,” Herendeen said. “The experiences break down the barrier between artist and audience by unifying the two halves.”