Home The Washington Diplomat July 2016 From Agamemnon to Alexander the Great, ‘The Greeks’ Has It All

Among the over 560 objects featured in a sweeping survey of Greek history at the National Geographic is a lekythos (a type of Greek pottery) depicting Ajax carrying the body of Achilles.

A magnificent show that will stun visitors with its ambition and scope, “The Greeks: Agamemnon to Alexander the Great” is a truly blockbuster museum experience. As National Geographic Society archaeology fellow and co-curator Fredrik Hiebert told The Washington Diplomat: “This project was definitely on the high end of the audacious scale.”

That’s no exaggeration — the show traces thousands of years and features 560 objects, many of which have never before left Greece. And 22 different museums in Greece contributed artifacts, offering “some of the finest examples of Greek art anywhere” for Washingtonians to view this summer, according to Hiebert.

“It’s the story of ancient Greece told by the directors of 22 national museums of Greece,” Hiebert said. “What you see are these directors’ favorite pieces. That’s the differentiator.”

For such a massive exhibition, the layout is beautiful and easy to maneuver, and the remarkable pieces of history are interspersed effectively with videos and interactive elements. From the Neolithic period to the age of Alexander the Great, the collection weaves famous stories such as those of Odysseus, Homer, Agamemnon and Pericles with unnamed figures discovered through their burial remains, bringing to life warriors, priestesses, noble women and athletes.

Broad swaths are made consumable and vivid for visitors, highlighting everyday objects such as plates and bowls alongside artifacts of exquisite beauty. And the show does an excellent job of touching on both life and death, with many of the highlights excavated from burials. 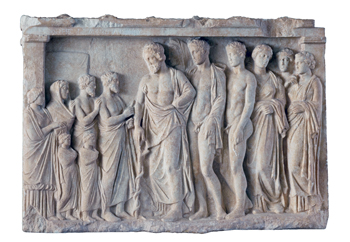 a votive relief offered to Asklepios, the god of medicine

There are also fun elements that will appeal to both kids and adults — one object available to touch calls on museumgoers to “grasp the handle of this bronze sword as if you were a powerful Mycenaean warrior, like the mighty Agamemnon,” or you can take a break later on in the show with a round of the “Epic Journey of Odysseus” board game. But it is the hundreds of artifacts that are unquestionably the stars of this exhibition.

The pieces are dazzling. Each feels essential, from the wonderful Cycladic figures, to the striking Mycenaean boar tusk helmet, to the painted vase depicting the blinding of the Cyclops Polyphemus, to the souvenir Olympic coins.

Filling a unique corner of the exhibition space is a set of bronze Bottiaean warrior helmets with gold funerary masks, one of the show’s major highlights. The 10 masks appear as if pressed against the deceased’s visage, giving a fascinating and evocative sense of individuality to the face of war. Each demands a separate look to fully appreciate the different details, geometric motifs, rosettes and heraldic symbols that delicately make up the warrior masks. Hiebert noted that these pieces were previously relatively unknown outside of Greece, and they have emerged as “a highlight for everybody.” 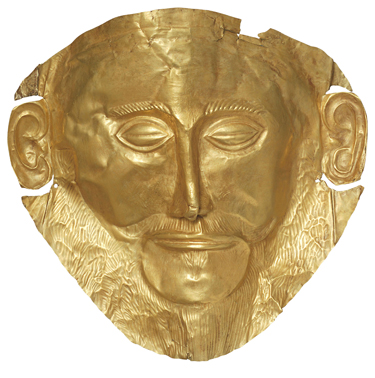 A replica of the mask of Agamemnon, the mythical king of Mycenae is on display at the National Geographic.

As visitors wind through the final section, a truly amazing gold piece commands attention. A gold enamel myrtle wreath worn by Queen Meda, the sixth wife of Philip II, is a stunning showstopper before things wrap naturally with a look at the life of Alexander the Great.

As Hiebert noted, this summer marks an ideal time for the National Geographic Museum’s striking exhibition.

“We think it’s a perfect time. We wanted to pick an election year, an Olympics year — we’ve got an amazing section on the Olympics — we were certainly thinking about those things,” he said.

The show is another successful big national treasures exhibition from the museum, in the line of impressive predecessors such as “Afghanistan: Hidden Treasures from the National Museum, Kabul.” Hiebert said the diplomatic community in D.C. has been particularly responsive to such national treasures shows like “The Greeks,” with many wondering when their own country will get a similar treatment.

“It’s a great way to tell the story of world cultures,” he said. “We think that National Geographic has taken this genre of national treasures exhibitions to a new forefront.”

This marks the only stop on the East Coast for the show — the largest and most comprehensive survey of Greek culture in 25 years — and serves as the final of its two stops in the U.S. Catch the show before it closes Oct. 10, and be sure to check out some of the events celebrating Greek history and culture that the museum is hosting this summer.

The Greeks: Agamemnon to Alexander the Great